No, this isn’t a re-run of one of Boston’s favorite television series. Rather, it’s a daily reminder of how the Bruins turned another third-period deficit into a victory.

Granted, the Bruins only trailed by one after Flyers forward James van Riemsdyk lit the lamp with a power-play marker early in the third period. But the ending provided another satisfying result for Bruce Cassidy’s squad.

In a sea of humanity in front of Philly netminder Brian Elliott, Brad Marchand evened things up at 1-1 with his seventh of the season at 12:01. Sean Kuraly blasted home another clutch goal with his second of the season a mere 27 seconds later to put the Bruins ahead for good at 2-1.

With a little help from a friend.@kurals9 rang one off the post and in for the winner and your @JagermeisterUSA Shot of the Game!#NHLBruins pic.twitter.com/p9WLvJDcLf

Tuukka Rask (23 saves) had an active night with a handful of quality stops — including a penalty shot stop on Joel Farabee — and secured another thrilling victory following Philly’s surge in the closing moments.

“Clearly, we didn’t have our legs early on. We found our way to keep ourselves in the game and killed some penalties,” Cassidy said after the Bruins extended their point streak to eight straight games. “Sure enough, it was a greasy goal around the net [by Marchand], and then Sean Kuraly comes up big for us.”

Here’s what we learned from Boston’s fourth straight come-from-behind win.

The Bruins have a tough decision to make on the blue-line with Matt Grzlecyk’s impending return. Connor Clifton filled in for Grzelcyk after the Charlestown native exited last Tuesday’s tilt against the Penguins with a lower-body injury.

With potentially one last chance to impress Boston’s coaching staff, Clifton made the most out of his evening. From preventing Kevin Hayes from creating a quality scoring chance following van Riemsdyk’s tally to dropping the gloves with Nicolas Aube-Kubel, the Quinnipiac alum set the tone with his assertive defensive play and physical skillset.

“He’s trying to get extra minutes in the lineup and stay in the lineup. Gryz [Grzelcyk] is getting healthy, so he wants to prove he belongs,” Cassidy said of Clifton.

“That scrap was great. [Aube-Kubel] was hitting everything that moved the other night — sometimes late — so we wanted to make sure that we banged back against those type of players. I thought it was a good scrap. It got us going. Good for Cliffy. He’s always going to be physical. Every game he tries to get his hits in. He’s playing his off-side. It’s not easy there at the point…but he’s doing his best to do what he can to help this team. He’s a great guy, guys love him. He practices hard and plays hard, so I can’t say enough.”

The Bruins love watching ‘Cliffy Hockey.’ He can spark the Bruins with a fight, a hit, a blocked shot, or a stout defensive effort. Whether it’s enough to keep Clifton over Jeremy Lauzon, Kevan Miller or Jakub Zboril is anyone’s guess.

“We call him ‘Cliffy Hockey’ because he just goes out there and plays,” Kuraly said.

The Bruins leaned on Rask when needed

The Bruins had difficulties sustain a rhythm at times. Unlike Wednesday where they peppered Carter Hart, Boston’s offense had difficulties entering the attacking end and sustaining quality scoring chances more often than not. They also found themselves shorthanded on numerous occasions, including a first-period stretch where Clifton, Chris Wagner, Charlie McAvoy, and Brandon Carlo all shared space in a tightly-cornered penalty box.

The Bruins leaned on Rask at times to bail them out. The Finn only saw 24 Flyers’ shots on net, but he made Boston’s effort worthwhile thanks to his timely saves on Farabee’s penalty shot and stopping Philly’s quality scoring chances down the final stretch.

How much longer can Boston sustain these comeback efforts?

These come-from-behind efforts may catch up to the Bruins if it happens more frequently. But now they’ll at least have some time to breathe after the league postponed their originally scheduled two-game set with the Buffalo Sabres.

The Bruins could have a pair of reinforcements for the first Rangers tilt in Grzelcyk and Jake DeBrusk. Regardless of who’s in or out, the Bruins will preach on sustaining a 60-minute effort. After all, they could use an extended break from the dramatic endings from this recent four-game stretch.

“We don’t want to make a habit of coming from behind,” Kuraly said. “But tonight was easier than the last couple [of games]. It was only one tonight.”

Coming back from one goal down isn’t too easy, either, but the Bruins make it appear as such. Now they want to find themselves on the other side of an early lead while sustaining or extending their advantage during a 60-minute tilt. 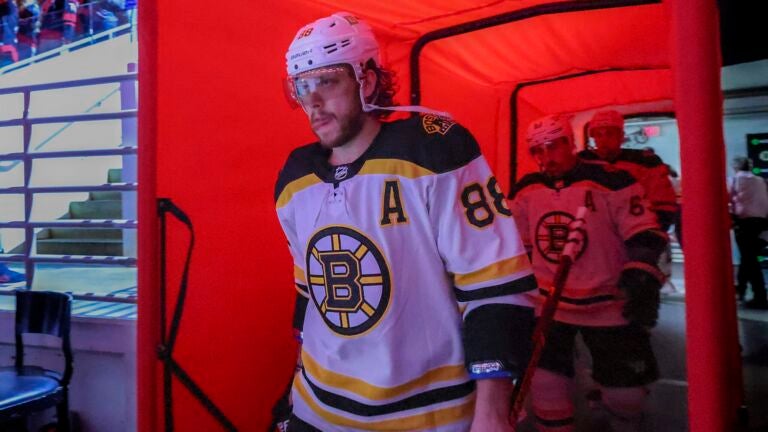