The Boston Bruins entered Sunday’s tilt with the lowly New Jersey Devils coming off an emotional high, rallying around Brandon Carlo following Tom Wilson’s cheap shot in a 5-1 win over the Washington Capitals. They came crashing down to earth a bit after a frustrating 60-minute outing less than 48 hours later.

The Bruins weren’t as crisp with their attacking zone entries and transition game compared to Friday. Yet, they fired 40 shots on Scott Wedgewood, 18 coming in the final 20 minutes. They just couldn’t find the back of the net on this night.

The struggling Devils, coming off five straight regulation losses, pounced late in regulation. Kyle Palmieri scored the lone tally with 4:37 left in regulation, earning their third win in four meetings against the Bruins this season.

“We had enough looks to generate a couple of goals around the net I thought,” head coach Bruce Cassidy said following Sunday’s 1-0 loss. “I think a lot of pucks hit [Blackwood], and I think he made some good saves obviously in the third period…We’re not going to win if you don’t put some goals on the board.”

Here’s what we learned from Boston’s frustrating setback.

Bruins experience a letdown from Friday

The Bruins came together after Wilson boarded Carlo. They hoped to build off of that against a bottom-feeding team.

The Bruins didn’t have Wilson or someone of his ilk to light a fire under them. They fought the puck more often than not. Yes, they fired 40 shots on net, but 17 of those came from the potent trio of Brad Marchand (2), David Pastrnak (5) and Patrice Bergeron (10).

The top line garnered several chances. The Bruins had a 13-3 shot advantage with the top Matt Grzelcyk and Charlie McAvoy pairing in 5v5 situations. The scoring depth from the secondary scoring lines and defense pairings couldn’t follow their lead, however, only managing 23 shots between them.

An eager Devils squad lulled the Bruins to sleep at times with their trap system. The Bruins, while not totally lacking for effort, just couldn’t dig deep to salvage a point against a rebuilding New Jersey squad.

“It was an emotional game [against the Caps]. We played really well during it,” Charlie Coyle said of the carryover effect from Friday to Sunday. “It’s our job, to come ready to play and to bring our energy for this one, especially against a team that, yeah, they’re not up there in the standings, but they’ve had our number this year.”

The Bruins haven’t yet faced the Buffalo Sabres, who sit dead last in the East Division. They’ll carry a five-game win streak against Buffalo for their first of eight meetings a week from Friday in Western New York.

Lately, the second to last and third to last teams in the East got the better of the Bruins. Sunday marked Boston’s third loss in four games — two in regulation — against New Jersey. The lone win came in a shootout on opening night.

The Bruins also dropped one to a young and talented, but still rebuilding Rangers bunch at Madison Square Garden. They bounced back from a 7-2 shellacking with an impressive 4-1 win two days later. Upon their return to Boston, the Bruins went 1-1-1 in their three games with the Capitals and Devils. Now they head to Long Island for a brief road trip hoping to earn their first victory of the season over the Islanders.

Cassidy’s squad, sitting third in the East, squandered away points against the sixth and seventh place in their division. It’s still early to make up ground, especially with their upcoming matchups with the Sabres. Heck, they struggled against the rebuilding Red Wings in the Atlantic Division for the two seasons before the COVID-19 pandemic and managed to make the Stanley Cup Final in 2019.

But with a tightening division race, the Bruins can’t afford to drop any of these winnable games much longer. Otherwise, they may find themselves fighting for their playoff lives at the end of the regular season.

“There are two points up for grabs each night,” Coyle said. “We have to do what we can to come focused and ready to go, no matter who we’re playing against.”

Is it time to sit Jake DeBrusk?

At times, DeBrusk appears on the cusp of breaking through. At other moments, he’s inching closer to losing his spot in the lineup.

Both instances played themselves out on Friday. The 2015 first-round selection had a quality scoring chance in the slot midway through the third period, which Wedgewood denied. Yet, he struggled to showcase that work ethic consistently, landing a mere three shot attempts — two on goal — in 16:45 of ice time.

Yes, DeBrusk found himself rotating between lines as the Bruins battled the injury bug. He’s skated with a variety of wingers and centers this season, including Marchand, Bergeron, David Krejci, Charlie Coyle, Jack Studnicka and Anders Bjork. He hasn’t produced, though, with a mere one goal and four assists in 17 games.

So what can DeBrusk do to breakthrough?

“I don’t think there’s a magic answer to that. We would’ve used it last year and this year,” Cassidy said.

Cassidy even threw in an odds-based analysis of sorts. If anything, it can help explain what he wants to see out of DeBrusk going forward.

“Let’s say he’s a 25-goal scorer just out of simple math, or 26. That’s a goal every third night in a season. So two of those nights, you’re not scoring, but you’re doing what you’re supposed to in order to score, right?” Cassidy explained. “So, you’re just increasing your odds, and I think that’s where Jake could score more if he could do that every night.”

Sounds simple, yet easier said than done. Yet, an impatient Boston fan base says its time to sit DeBrusk, or include him in a trade package.

The former scenario may not be a bad thing in the immediate term. Some players tend to improve after watching a game or two high above rinkside. DeBrusk showed that during his rookie season, eventually becoming a top-six regular in 2017-18.

Surely, Cassidy would have to adjust his lineup accordingly again if he sits DeBrusk. Perhaps he’d re-insert Sean Kuraly on the fourth line while moving Bjork or Craig Smith with Krejci and Ritchie on the second trio. Or Don Sweeney could call up fellow 2015 first-rounder Zach Senyshyn from Providence hoping he’d carry over his early-season success at the AHL level.

The Bruins don’t need to panic over DeBrusk quite yet. Sitting him for a game or two — or more — may reignite a spark. But, the Edmonton-born forward may be running out of chances to impress the Boston brass. 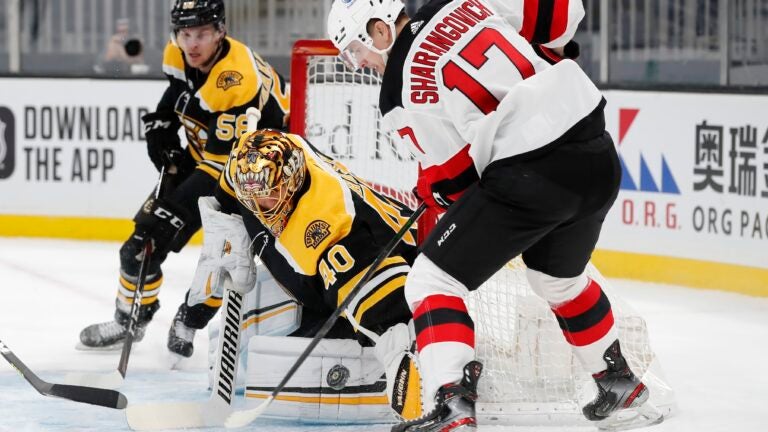