Bob Beers has seen his share of big hits on the ice, both as an NHL/AHL veteran and as the 98.5 The Sports Hub radio commentator for the Boston Bruins.

And he has no qualms about calling Washington Capitals forward Tom Wilson’s shot on an unsuspecting Brandon Carlo in last Friday’s 5-1 Bruins win “a bad hit.”

In an interview with 98.5’s Toucher and Rich show, Beers broke down his perspective on the hit that hospitalized the Bruins defenseman as well as the tense atmosphere leading up to the play itself.

He even said he “expected” such a play to occur and said the officials should have known “something was going to explode” after the heated Wednesday night contest between the two teams — a 2-1 shootout victory for Washington.

“The same referees [who officiated the Friday game between the two teams] did the game on Wednesday,” Beers said. “So you should have a pretty good feel for the tenor of the game and how it’s going. Things can get out of control easily with those two teams and the animosity that’s built up between the two of them.”

Beers noted that Wilson took two aggressive runs at Bruins forward Trent Frederic earlier in the same shift before zeroing in on Carlo, who was battling for a puck against the boards in the Bruins’ zone at the end of the first period.

Carlo needs help getting off the ice. pic.twitter.com/RgACye1H7l

“He was upset, he was fired up,” Beers explained. “The two games had been really emotionally charged. That’s a guy who plays on emotion.

“I like the guy, I really do. I’d love to have him on our team. But he crossed the line, no question about it…[Carlo’s] barely moving. You can control that hit, and Wilson didn’t.”

The hit earned Wilson a seven-game suspension from the NHL but was not ruled a penalty on the ice, something Beers called “inexcusable” on the part of the referees.

He, like Bruins coach Bruce Cassidy, noted Wilson has “done this before”; Wilson has received four suspensions in his career, though none since 2018 until this latest infraction.

Beers also took issue with Capitals coach Peter Laviolette’s saying the play “looked just like a hit” unworthy of punishment before the suspension came down, though Beers also acknowledged Laviolette’s main motivation was likely supporting his own player.

“He’s got his player’s back,” said Beers, who noted he played alongside and for Laviolette in his own hockey career. “That’s fine. I’ve got no problem with it.

“I don’t think he really believes it. If he does, then we have a major disagreement…if you’re anybody that lives anywhere other than Washington that defends that hit, you don’t know the game.”

Beers did recant part of his live description of the play, saying he was wrong to suggest Wilson came “a long way” to make the hit. But he said he stands by his belief the hit deserved harsh discipline. 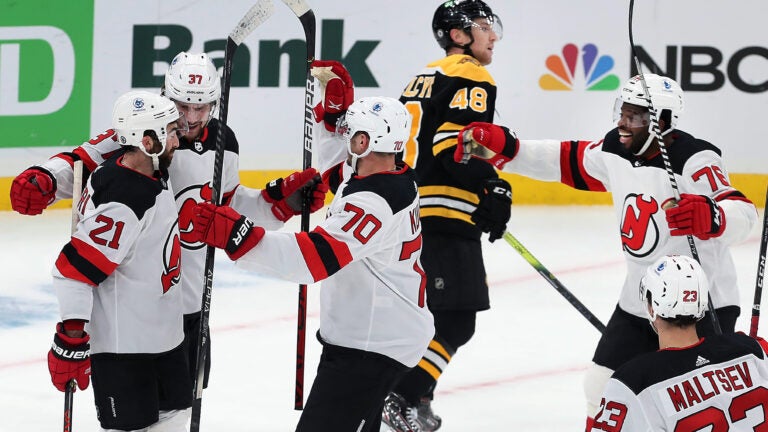 Three takeaways as the Devils stall the Bruins’ momentum