Jake DeBrusk isn’t the only Bruin struggling to give his team consistency in the secondary scoring department. But unlike his other teammates, his inconsistent play became more noticeable with each performance.

With a mere five points on the season — a goal and four assists — DeBrusk found himself teetering into healthy scratch status. DeBrusk’s effort in Boston’s 1-0 loss to the New Jersey Devils on Sunday provided the final straw for coach Bruce Cassidy.

For the first time this season, Cassidy decided to bench DeBrusk for performance-based reasons as the Bruins prep to take on the defensively sound New York Islanders at Nassau Coliseum on Tuesday night. Sean Kuraly returns to his usual fourth-line center role as Jack Studnicka moves up to the second line right wing spot.

DeBrusk, who missed five games this year because of a lower-body injury, found himself moving around the top three lines as the Bruins dealt with injuries up front this season. At some point, the onus goes directly to a struggling player.

Cassidy and the coaching staff tried every method to light a fire under DeBrusk. With a mere seven shots on goal and one assist over the past five games, the Bruins felt they had no other choice but to sit the 24-year-old winger.

“At the end of the day, we’re not quite getting out of Jake what we want,” Boston’s fifth-year bench boss said during his pregame media availability on Tuesday. “Some of that is circumstance and situational. He’s moved around [the lineup], he’s been hurt, his center he’s played with in the past has been hurt…But I still feel he’s been given ice time to perform to the best of his ability.

“We just feel we’re not getting the effort required,” Cassidy added. “It’s not always about the scoresheet. It’s about being one of 20 guys helping you win, and sometimes it’s there, and sometimes it’s not. We’ve tried different messaging with the player and sometimes going upstairs and taking a look is not a bad way to go to put a different perspective on it. Maybe he’ll have a better appreciation for being in [the lineup] and then maybe educating yourself on what you see up top than you do in live action.”

Cassidy sent a statement to DeBrusk this time around. Now it’s up to the 2015 first-round selection to respond the next time he enters the lineup.

The Edmonton-born forward isn’t just playing to reclaim a spot in Boston’s lineup, though. With the Bruins once again needing an upgrade in secondary scoring, DeBrusk, a few months removed from signing a two-year contract worth $3.675 million annually, finds himself in the trade rumor mill. GM Don Sweeney could expose DeBrusk in the Expansion Draft this summer if he decides to keep him for the remainder of the season.

DeBrusk found himself in this predicament early in his rookie season. He went on a solid run after his benching in early-November against the Maple Leafs, tallying six points in five games before Thanksgiving. That run prompted Cassidy to keep DeBrusk as a second-line mainstay next to David Krejci.

The Bruins had some wiggle room with DeBrusk in his 2017-18 campaign. DeBrusk responded well to his benching then. He has that going for him, yet DeBrusk might be running out of chances to persuade the Bruins into keeping him for the long term. His next response will be the defining challenge of his career to date. 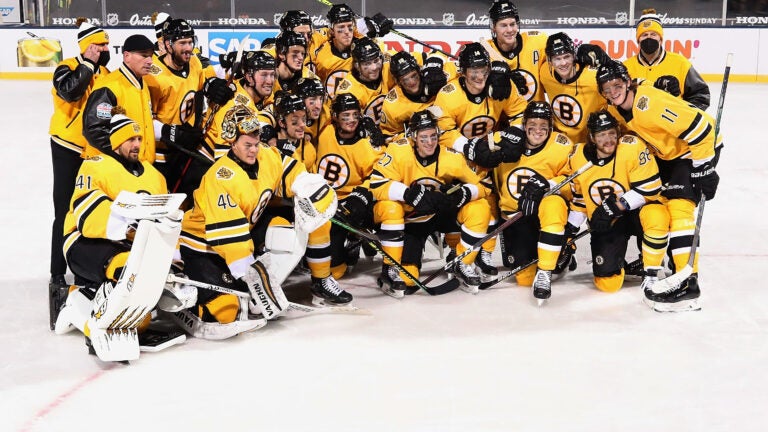