The Boston Bruins had quite a productive business trip to Lake Tahoe last month for the 2021 NHL Outdoor Games, thrashing the Philadelphia Flyers 7-3 in their contest.

They also had plenty of fun after the game, too.

The latest episode of NHL.com’s “Behind the B” series captures the highlights of the Bruins’ big win over their East Division rivals and the postgame celebration that followed, including Trent Frederic learning about “Boston’s song” and a humorous interview with star forward David Pastrnak.

The postgame tunes were on point in Tahoe.#BehindTheB | @pastrnak96

Pastrnak, who wore a mic for the game, led the way for the Bruins with his 11th career hat trick — his second of the year — and could be seen (and heard) congratulating and joking with his teammates, like Connor Clifton, on the ice after the game.

The episode also shows Pastrnak putting the song “Barbie Girl” on the Bruins’ locker room speaker before being pulled out of the locker room for a postgame interview, during which he famously (and hilariously) feigned annoyance while wearing pink goggles.

Fans also get to see the moment Frederic realizes the song “Dirty Water” by The Standells, which had started playing on the ice after the final horn, is actually a Boston victory song while talking with Craig Smith and Patrice Bergeron.

“That’s a good song,” Frederic says in the video. “I don’t think I know it. But I was kind of singing it. … Is that Boston’s song?”

“It is,” Bergeron says before singing “Boston, you’re my home!” aloud.

When Frederic asks if he’s supposed to know the song and its significance, Bergeron responds: “Well, it says it in the lyrics.”

With any luck, Frederic will get a chance to hear the song played again later this week when the Bruins return home to face the New York Rangers on Thursday. The team faces the New York Islanders tonight at 7 p.m. 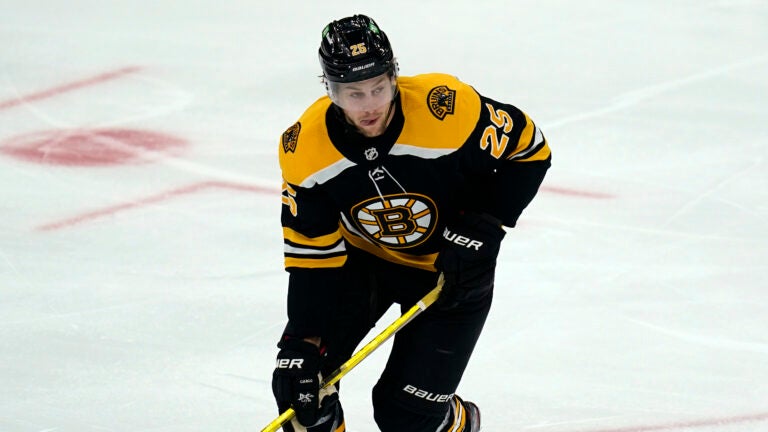