Bruins winger Jake DeBrusk will miss Saturday’s game against the New York Rangers due to COVID-19 protocols, the team announced.

DeBrusk was benched Tuesday following what coach Bruce Cassidy deemed as a lack of effort in previous games. Bruins president Cam Neely backed the decision and said it’s not the first time Neely and DeBrusk have had discussed the issue.

“We just feel we’re not getting the effort required,” Cassidy said ahead of Tuesday’s game. “It’s not always about the score sheet. It’s about being one of 20 guys helping you win…We tried different messaging with the player, and sometimes sitting upstairs and taking a look is not a bad way to go and put a different perspective on it and have a better appreciation for being in there.”

DeBrusk, a first-round pick in 2015, got a haircut, swapped sticks, recharged, and scored a goal in the Bruins’ 4-0 win over the Rangers on Thursday. He acknowledged he took the healthy scratch personally and called himself “a pretty easy target.”

“I know what I need to do,” DeBrusk told reporters. “There’s been lots of articles. You guys can probably figure it out, too.”

DeBrusk, who has just two goals and four assists in 18 games, signed a two-year, $7.35 million bridge deal in November. He appeared to be gaining momentum late this week, but now that momentum has been zapped as he’s forced to sit out Saturday.

“It’s just a tough break for him,” Cassidy said before Saturday’s game. “He’ll have to go through the protocol now and hopefully pop some negative tests.”

In other news, Cassidy shared that Brad Marchand is feeling good and set to return after missing practice Friday. Zach Senyshyn (upper-body) will be out at least a week but shouldn’t require surgery. Kevan Miller (knee) has begun skating and is likely to travel on the upcoming trip.

Anders Bjork and Chris Wagner go back in.

Kevan Miller has begun skating and is likely to travel on B’s upcoming trip.

Brandon Carlo is “coming around,” is unsure if he’ll travel. pic.twitter.com/mrI7rA1VSf

Brandon Carlo, who was hospitalized after a forceful hit from Tom Wilson of the Washington Capitals, is “coming around.” Cassidy doesn’t know as of Saturday whether Carlo will travel on the upcoming trip. 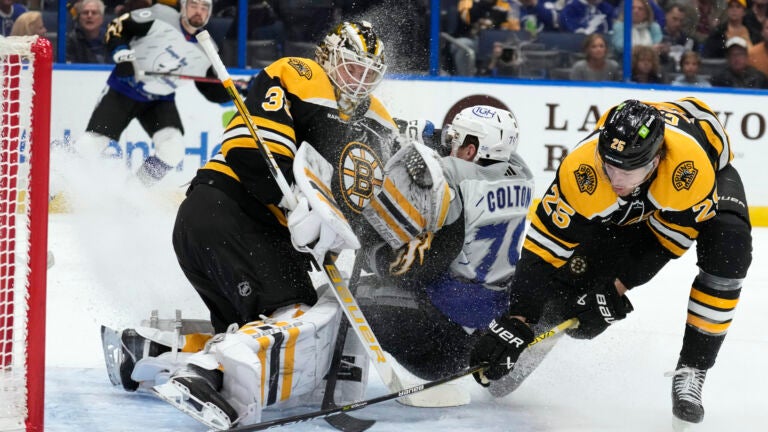