The Boston Bruins tallied their first two points out of a possible 16 against the Buffalo Sabres on Thursday. They’ll continue to stockpile those important points in their seven remaining meetings against the lowly Sabres.

For the first time since mid-February, the Bruins earned their second consecutive win with a 4-1 triumph over the worst team in hockey.

The Bruins entered the day with uncertainty as Sean Kuraly found himself on the COVID-19 protocol list. A member of the Sabres coaching staff also received a positive COVID test earlier in the day. Boston ended the night taking care of business in their first of eight meetings with Buffalo.

Here’s what we learned after the Bruins handed the Sabres their 13th straight loss.

His contributions go unnoticed with Bruins fans at times. But make no mistake, Krejci’s value to his club resonates with his teammates.

“Krech [Krejci] is a great player,” forward Craig Smith said after breaking a 10-game goal drought late in the second period on Krejci’s second assist of the night. “He’s able to slow it down. He’s one of the smartest players I’ve played with as far as talking to me on the bench, and the little plays he sees out there where guys I’ve played with in the past haven’t been to see. So it’s kind of impressive.”

The noteworthy accomplishment is obviously impressive in and of itself. It’s quite a remarkable milestone given the variety of wingers gracing Krejci’s presence over his 14-year year career. From Milan Lucic and Nathan Horton to the rotating door of wingers like Smith, DeBrusk, Rick Nash, Jarome Iginla and Nick Ritchie (to name a few) over the last decade, Krejci provided a steady hand within Boston’s top two scoring lines.

“He’s had longevity when you’ve had a lot of different wingers, right?” Cassidy said of Krejci’s Boston tenure. “It’s been the ask of him here is to just pull whoever is on the line along. Obviously, there’s always adjusting to everybody’s game and Krech plays a little bit of a unique game in that way. He likes to slow the pace down at times and then pick up the pace, so guys have to read off you in that regard. But he’s going to get you the puck if you’re a scorer, eventually.”

Krejci remains one of four holdovers from that 2011 Stanley Cup squad. His contract expires after the season. Don Sweeney absolutely needs to solve that top-six conundrum with a viable scoring option to skate with Krejci between now and the April 12 trade deadline.

The Savage, Minnesota, born defenseman impressed the Bruins’ brass enough down in Providence to earn a callup for this four-game trip. Skating alongside Steven Kampfer on the third defensive pair, Ahcan’s first game at the NHL level provided some bright spots and room for improvement. The ex-St. Cloud St. blue-liner finished the night with three shots on goal, a hit and two blocked shots in 17:55 of ice time.

“He was involved in the game, both good and bad at times,” Cassidy said. “But I like that. I like a player that’s willing to be assertive. It’s his first ever NHL game; guys are tentative, but he wasn’t. He’s going to have to learn that guys are quicker here — they can strip you of pucks and different things — but I liked the fact that he was ready to go offensively.”

Ahcan earned praise for his offensive skillset and on-ice smarts before arriving to the professional hockey level. He’ll likely return to Providence when — or if — Boston’s blue-line returns to health. But his promising development in his first professional season provides the Boston brass with a glimmer of hope within their prospect pipeline.

Jake DeBrusk bats one home on the power play.

The Bruins didn’t even know if they’d get the game in after Kuraly and a member of Buffalo’s coaching staff tested positive for COVID-19.

This wasn’t new territory for either squad. The Bruins had a handful of games rescheduled because of various coronavirus outbreaks in the early part of the season. The Sabres found themselves at the epicenter of the NHL’s outbreak following a late-January tilt with the New Jersey Devils.

Amidst all the uncertainty, the Bruins and Sabres went on as scheduled. Yet, in this atypical environment, Cassidy’s bunch went about business as usual.

“It is what it is,” Smith cliched. “We just have to prepare for what we do, and then honestly control what we can control and try to be as sharp as possible.”

In just his second game with Boston, Gregg McKegg scored his first goal as a Bruin. With the game’s status in limbo, McKegg didn’t significantly alter his mental approach before finding out he’d enter the lineup in Kuraly’s fourth line spot with Trent Frederic and Karson Kuhlman.

“Obviously it’s a weird year, and you never know when your name is going to be called,” McKegg said. “So I just tried to stay ready and wait for my opportunity.”

The Bruins had a pair of false-positive cases with Charlie Coyle and Jake DeBrusk earlier this year. They’re one of the few fortunate teams who haven’t encountered a significant outbreak this season.

Kuraly enters wait and see mode in COVID protocol. But the Bruins remain steadfast with their one-day-at-a-time approach during this uncertain period. 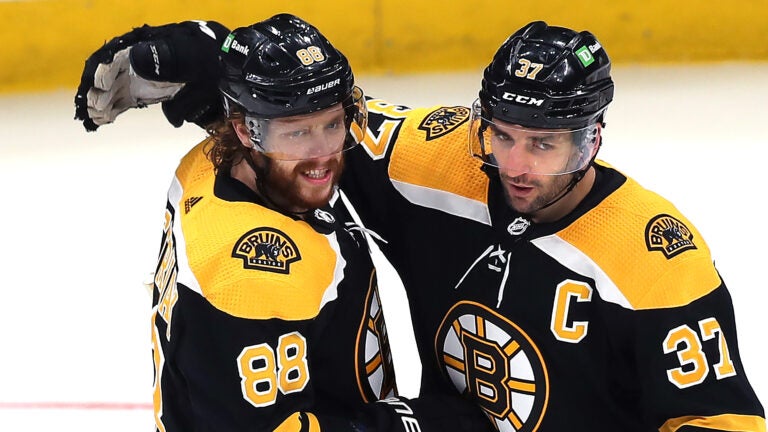