If one game to date could sum up the Bruins’ 2021 season, it would be Saturday’s 7-5 win over the Pittsburgh Penguins.

This time, the Bruins showcased resiliency through all the loops and turns against Sidney Crosby and company. Bruce Cassidy’s bunch overcame a pair of second-period deficits.

Patrice Bergeron and David Pastrnak notched the first two goals a mere 45 seconds apart to give the Bruins a 2-1 lead in the opening moments of the middle stanza. But a pair of defensive breakdowns from a patchwork D without Brandon Carlo’s services led to Jake Guentzel and Jared McCann quickly giving the Pens a 3-2 edge in a 2:36 span.

Through all this, the Bruins remained assertive in the attacking end. Brad Marchand sparked the team in the final 5:04, tallying two of his three goals on the afternoon, and adding a helper on David Krejci’s go-ahead tally — a power-play tip in — to put the B’s ahead for good.

“You know, I think we were just tired of it. We had a tough start and we said ‘enough,'” Pastrnak said postgame. “We wanted to come into the second period really hard and just put the puck deep, get our forecheck going…and that was our main focus in the second period. Then we got scoring opportunities and today we capitalized on them. So, I think that was a huge part.”

The Penguins provided some tension in the third. The Bruins remained calm and finished the job.

Cody Ceci cut the Bruins lead to one again with his third tally of the season 4:38 into the final stanza. Pastrnak, in his first full game skating with Krejci and Nick Ritchie, made sure Boston walked away with two points after reclaiming the two-goal cushion with his second of the afternoon at 13:28. Marchand capped off his fourth career hat trick with an empty-netter after Crosby’s shorthanded tally and subsequent sell job sending Patrice Bergeron to the box for high sticking.

Hoping Sidney Crosby is ok after this 🙏 pic.twitter.com/EA4sR87BRn

Here’s what we learned from after the Bruins found their offensive mojo in their wild victory over the Penguins.

The new look lines provided a change of pace.

Marchand with three points in the second period.

The Bruins relied heavily on Marchand, Bergeron, and Pastrnak to simply dominate their opponents on a nightly basis. The trio, like the rest of the team, looked a little off over the past several weeks. With Pastrnak’s struggles gaining traction, in particular, Cassidy opted to move the dynamic 2014 first-round selection with Krejci and Ritchie in an attempt to balance out the lineup.

Pastrnak and Krejci reclaimed their chemistry during their first 60-minute game together in quite a while. Ritchie’s heavy presence complimented the crafty Czech playmakers into a well-rounded trio. All three players put forth multiple-point outings.

🎥 #NHLBruins David Krejci on searching for consistency late in the season: “We’re trying to build something here…that was a good step in the right direction and we’ll just keep it rolling and get ready for the next one.” pic.twitter.com/pG4DILKQzQ

Craig Smith moved up to Pastrnak’s spot with Bergeron and Marchand. They rarely encountered any road bumps in 12:13 of 5v5 time, firing 12 shot attempts compared to Pittsburgh’s four when they were on the ice.

It accumulated into a well-rounded effort within the top-six en route to a needed victory.

“It’s always nice to have a game like this,” Krejci said after becoming the fifth Czech player in NHL history to tally 500 career assists. “As you saw, we changed up the lines a little bit and it paid off. So, we just need to keep working on the things we do well, keep improving on the things we don’t do well and keep it rolling.”

The next step for Cassidy and crew: building off this win beginning with Monday’s crucial showdown with the Philadelphia Flyers. On Saturday, they set a foundation with a solid offensive formula and a more balanced lineup.

🎥 #NHLBruins coach Bruce Cassidy reacts after a 7-5 win over Pittsburgh on Saturday afternoon: “Emotion right down to the bitter end, until the last whistle…we needed a little bit of that today.” pic.twitter.com/WhLA8xdNlD

The B’s vets led the way in a rare 5v5 scoring outburst.

As if this hasn’t been discussed ad nauseam, the Bruins entered Saturday with the second fewest 5v5 goals scored this season.

After a tough first period, the Bruins displayed a relentless, but steady attacking zone rhythm. They tied their season-high single-game output with seven. Five of their seven markers came at 5v5.

The Bruins haven’t been a poor puck possession team by any means. The strong advanced statistic metrics haven’t resulted in what matters most, however: goals. On Saturday, they worked their way to several quality scoring chances in high-danger areas with their relentless puck pursuit.

The top-six provided most of the dirty work at even strength. The leaders, Marchand, Bergeron, Pastrnak and Krejci, delivered in timely moments.

“It was all our top guys. Obviously, you’re going to have games like this throughout the course of the year. With the type of resumes they have, Pastrnak, Marchand, Bergeron, Krejci, these guys are going to have some days [like this]. We just haven’t had a lot of them for whatever reason,” Cassidy said. “I thought the goals we scored today were excellent. There were no flukey ones, no freebies, other than the empty-netter…so nice plays. High-end plays by high-end players.”

Only seven #NHLBruins have notched 500 assists.

David Krejci is the latest.

Cassidy is trying to make the most out of what the team has on D.

The Bruins inched toward a healthier defensive lineup when Carlo returned for Tuesday’s contest with the Devils. Carlo’s return became short-lived after he exited with an upper-body ailment in the first period of Thursday’s tilt with the Penguins.

With Carlo week-to-week and Kevan Miller still on the mend, the Bruins are right back at square one, working with a patchwork defensive core. Jeremy Lauzon’s struggles since returning from injury escalated matters heading into the second half of Boston’s back-to-back with Pittsburgh.

Cassidy benched Lauzon on Saturday, replacing him with Jarred Tinordi. He paired Tinordi with Connor Clifton on the third pair, with Jakub Zboril and Steven Kampfer earning second pair minutes and Matt Grzelcyk and Charlie McAvoy anchoring the top pair.

The results were quite mixed.

McAvoy and a banged-up Grzelcyk put their puck-moving skillsets to good use, combining for four assists. Zboril and Kampfer threw their weight around, combining for five hits in their extended roles.

Tinordi and Clifton struggled. They found themselves the ice for a pair of self-inflected goals against — including an icing from Tinordi’s errant pass to Anders Bjork shortly before Jankowksi’s first-period tally — on the heels off of a Pittsburgh faceoff win.

Allowing five goals usually doesn’t bode well for an offensively challenged squad. Though some blue-liners provided steady play in spurts, the Bruins overcame their defensive miscues with their seven-goal outburst.

“We got the win. We obviously gave up five goals — I wouldn’t put that all on the D,” Cassidy said. “You know, they made some plays, but at the end of the day, I’ll have to look at it closer to see where the chemistry was or wasn’t and then go from there.”

Cassidy rarely trotted out a healthy defensive core this season. Between the injuries and implementing some youth on the back end, the Bruins find themselves in a defensive conundrum. 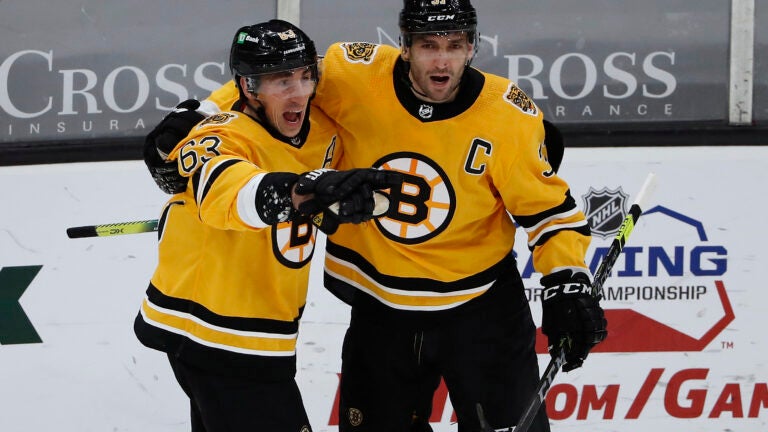