The Bruins added some much-needed defensive depth on the left side Sunday night, acquiring defenseman Mike Reilly from the Ottawa Senators in exchange for a 2022 third-round pick.

Here’s what you need to know about the 27-year-old Reilly.

The six-year professional is in the midst of his most productive season in the NHL, compiling 19 points (0 goals, 19 assists) in 40 games with the Senators. Reilly’s previous career high in points came in 2019-20 when he posted 12 points (1 goal, 11 assists) across 30 games with Ottawa.

The Bruins rank 27th of 31 teams in scoring 5 on 5 goals (2.04 per 60 minutes) and Reilly should help in that department. Thirteen of his 19 assists have come during 5 on 5 play, and he ranks second in the NHL for defensemen in 5 on 5 assist percentage per 60 minutes (1.27), trailing only Avalanche star Cale Makar.

Reilly’s 19 assists would tie Patrice Bergeron for third most on the Bruins behind Brad Marchand and David Krejci.

The 6-foot-1-inch, 183-pound Reilly has bounced around during his NHL tenure with Sunday marking the third time in four years he has been traded midseason. After signing with the Minnesota Wild as an unrestricted free agent in June 2015, Reilly made his NHL debut later that season. He spent two-plus seasons with the Wild before being dealt to Montreal in February 2018 for a 2019 fifth-round pick.

After a two-year run in Montreal, the Canadiens traded him last January to Ottawa for Andrew Sturz and a 2021 fifth-round pick.

Reilly was selected in the fourth round (98th overall) of 2011 draft by the Columbus Blue Jackets, but elected to attend the University of Minnesota instead. During his three-year career with the Gophers, Reilly won a pair of Big Ten Defensive Player of the Year awards and was a two-time All-Big Ten First Team selection. As a junior in 2014-15, he was a finalist for the Hobey Baker Award.

He became an unrestricted free agent in June 2015 after he was unable to reach a deal with Columbus, and signed with his hometown Wild on a two-year entry level contract.

“I feel very comfortable with Minnesota,” Reilly said to the Minnesota Daily at the time. “As it all unfolded in the last few days, this is what made the most sense. Whenever that day is, it’ll be very exciting. I’m anxious to get going; it’ll be very special.”

Reilly’s father, Mike, is a minority investor with the Wild and was an eighth-round pick by the Canadiens in the 1977 draft after playing collegiately at the University of Minnesota.

Reilly scored his first career NHL goal on Feb. 13, 2016, against Boston. The tally came with 37 seconds left in regulation in a 4-2 Bruins win, as Reilly beat Jonas Gustavsson with a shot. 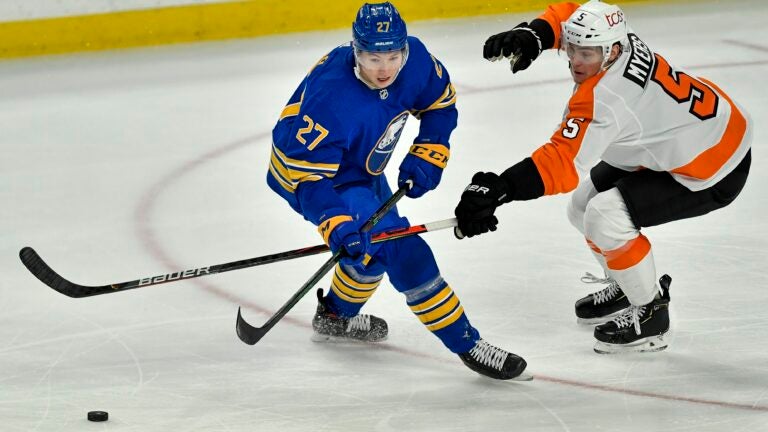 Taking a look at Curtis Lazar, the center the Bruins acquired from Buffalo