The Bruins acquired forwards Taylor Hall and Curtis Lazar in a trade with the Buffalo Sabres, the team announced Monday morning.

The Bruins sent forward Anders Bjork and a second-round pick in this year’s draft to Buffalo.

ESPN as well as Sportsnet and TSN in Canada reported the deal was in the works just after midnight on Monday. According to TSN’s Pierre LeBrun, Buffalo will pay half of Hall’s $8.8 million salary (as calculated for cap purposes) to get the deal done.

On Sunday night, the Bruins announced a trade for Ottawa defenseman Mike Reilly, brought in for a third-round pick in 2022.

The Bruins, blown out by the Capitals on Sunday (8-1), responded by snagging Hall, the former MVP and rumored trade target for several seasons, along with an injured forward (Lazar) with term and a solid offensive defenseman (Reilly).

Bjork, a 24-year-old, middle-six winger, and a second-rounder is not a hefty price for Hall, who could wind up being the bonafide top-six winger the Bruins have been seeking all year.

At his best, he is a puck-rushing playmaker who can alter games with his aggressive speed.

Hall looks like a fit on David Krejci’s left wing, with either Jake DeBrusk or Craig Smith on the right side. He should boost an offensively-challenged group. The Bruins rank 27th of 31 teams in scoring 5 on 5 goals (2.04 per 60 minutes, according to Natural Stat Trick). His puck-carrying skill should also help a battered defense get out of its own zone more often.

Some Bruins fans may remember Hall, 29, as the No. 1 overall pick in the 2010 draft, one ahead of Boston’s selection of Tyler Seguin. He’s since bounced from New Jersey to Arizona for a half-season, then to Buffalo this year.

He scored 93 points in 76 games for the Devils in 2017-18, dragging them to a surprise playoff appearance and winning the Hart Trophy. Despite left knee issues the following season, he still scored more than a point per game (37 in 33). His production has dipped since; he was traded last midseason to Arizona, before landing with the Sabres last offseason on a soon-to-expire, one-year, $8 million deal.

Hall, whose previously worn Nos. 4 and 9 are retired in Boston, could don the No. 91 he wore for the Coyotes last season.

When the new players will debut was not immediately known. The Bruins are not scheduled to practice Monday. They play the Sabres on Tuesday at TD Garden.

Lazar is a defensive-minded bottom-six forward. He is listed as week-to-week with a lower-body injury. He does have another year on a deal costing $800,000 against the cap. He chipped in five goals and four assists in 33 games with Buffalo.

Reilly, 27, had a career-high 19 assists in 40 games before the Senators shipped him to Boston. He will be an unrestricted free agent after the season. 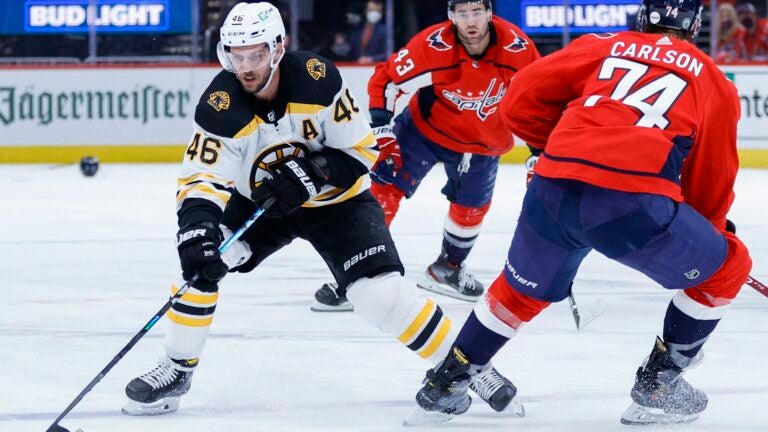 David Krejci is aware of 'Playoff Krech,' but he doesn't want to talk about it