Don Sweeney entered another trade deadline needing to resolve the glaring secondary scoring concerns. The Bruins additionally needed a left-shot defenseman for their injury-plagued blue-line and a depth forward for the bottom-six.

The fifth-year GM went to work. By late Sunday night, he acquired a trio of significant targets, first trading for defenseman Mike Reilly from the Ottawa Senators for a 2022 third-round pick.

The bigger splash came a couple of hours later with the Bruins landing forwards Taylor Hall and Curtis Lazar from the lowly Buffalo Sabres for Anders Bjork and a 2021 second-round selection.

So what will the Bruins lineup look like with Hall, Lazar and Reilly? Here’s a breakdown on those ramifications following Sweeney’s trade deadline additions.

After missing out on Hall in free agency, they finally landed the 2018 Hart Trophy winner.

If Hall had his way, he would’ve been a Bruin at the start of the year. Alas, he waived his no-movement clause to come to Boston and hope to find his spark again.

Hall wanted to put on the Spoked B. He has his wish after waiving his no-movement clause. Now he has to put the tough times in Buffalo behind him and deliver the Bruins some immediate success in hopes of securing a longer-term deal in Boston before he hits the free-agent market for the second straight off-season.

🎥 New #NHLBruins winger @hallsy09 on coming to Boston: “I want to come and win games…that’s what makes me most excited…I really want to be a part of a winning team…however I can do that, I’m all in.” pic.twitter.com/V9HhHRN8MX

“I’d love to be a Bruin for a few years. It’s obviously been a bad year for me personally, and I need to play well; I need to contribute, and most of all I want to be part of a team that wins games, and I really believe that we can do that here,” Hall said during his first Zoom call with the Boston media.

“There have been a lot of distractions this year. A lot of things haven’t gone well and confidence-wise. The team here in Buffalo just never got off to the right foot. I think the best way to get confidence is to be a part of a winning team and to make yourself part of the bigger solution, and that’s what I’m hoping to do.”

The Bruins hope to provide a fit for a struggling Hall alongside David Krejci or Charlie Coyle.

Now with a plethora of left wingers at their disposal, the Bruins will likely transition Jake DeBrusk to his off-wing. Another slumping scorer in David Pastrnak will either stay with Krejci or reunite with Patrice Bergeron and Bard Marchand on the top line.

If I had to bet, I’d stick Hall with Krejci on the second line — with DeBrusk at the opposite wing — and reunite Pastrnak with Marchand and Bergeron, at least in the short term. This would move Craig Smith and Nick Ritchie to the third line with Coyle.

Hall’s reputation on and off the ice provides concern. His dip in production since suffering a knee injury in 2018-19 left some pundits wondering if his best days are behind him. Yet, Hall hasn’t entered a locker room as tight-knit as the Bruin. Now he hopes to fit in and find his scoring touch again for the playoff-hopeful B’s.

The combination of injuries and younger inexperienced blue-liners struggling to adapt to the NHL level prompted Sweeney to ask for defensive help. After fielding an AHL-level defense in their lopsided 8-1 loss to the Capitals Sunday night, the Bruins acquired a needed reinforcement from the Ottawa Senators.

Following his first two stops in Montreal and Minnesota, Reilly found himself in an elevated role with Ottawa. He’s responded well with the increased minutes — averaging over 18 per night — en route a career year.

Reilly doesn’t have any goals to his credit, but he isn’t shy shooting the puck. His 67 shots on goal — 58 in 5v5 play — stood second behind Thomas Chabot among Sens defensemen.

But Reilly’s keen puck-moving skillset stands out above all else. The Chicago-born blue-liner has 19 assists on the season, with 13 helpers coming in 5v5 play.

Adding Reilly with a healthy Charlie McAvoy and Matt Grzelcyk will provide the injury-plagued blue-line some needed help in the transition game.

🎥 @mreilly93 reacts to joining the #NHLBruins: “Really excited to get going here…I love the way Boston plays and also know a couple guys on the team that’ve already reached out to me.” pic.twitter.com/xMSIQQFhr1

“He does have some ability in the offensive blue line, which he has shown to be able to get pucks through or to make some plays – going down the wall, getting pucks to the middle. He’s got experience, he has confidence and he’s done it at every level,” Sweeney said of Reilly.

“If you look at his numbers and his progression in the NHL level, he’s got a power-play component that I think he can — again, you see [Grzelcyk] went out of the lineup, Charlie’s gone in a done a little bit of that. You’re just trying to find some depth and a little different flavor with experience, and I think Mike brings a little bit of that on both sides…”

When healthy, Brandon Carlo’s strength, skating and defensive prowess provided a nice compliment to puck movers like Krug and Grzelcyk. Having a steady puck-mover like Reilly with Carlo would provide Cassidy a well-rounded defense core.

Cassidy will have to find a short-term fit for Reilly. Pairing him with a physical specimen in Kevan Miller might be the way to go. But the Bruins may want to pair Reilly’s skill set and experience with another younger right-shot option like Connor Clifton in an attempt to balance things out on the back-end.

Miller will return for Tuesday’s tilt with the Sabres. McAvoy could find himself back in the lineup as well after skating on his own the past couple of days. Carlo and Grzelcyk remain on the mend.

The Bruins still have a ways to go to heal up defensively. Adding Reilly should at least smooth some of the rough patches until Carlo, McAvoy and Grzelcyk return.

Lazar, Hall and Reilly all drove to Boston to avoid quarantining upon arriving to their new homes. Unlike Hall and Reilly, the Bruins don’t expect to have Lazar ready for Tuesday’s tilt against his former Sabres teammates as he nurses a lower-body injury.

When he returns — or in this case debuts — Lazar will find himself in a familiar fourth-line role. Boston’s current fourth trio of Trent Frederic, Sean Kuraly and Chris Wagner struggled to provide consistent energy over the last few weeks. Lazar’s physicality and stout awareness in all three zones provide the struggling fourth line with some needed versatility.

🎥 @CurtisLazar95 on joining the #NHLBruins: “It’s exciting, that’s what every player wants, to be in the postseason. We’ve got a great chance here. I’m happy to be a part of a very special organization with the Bruins.” pic.twitter.com/tlTskUe8pR

“For myself, it’s an honest game. It’s a 200-foot game,” said Lazar, who notched nine points in 33 games with the Sabres this season. “I pride myself in keeping the puck out of our net, even more so than probably putting the net in their net. But that doesn’t mean I’m any slouch at the offensive side either. I pride myself on energy and engaging the momentum throughout a game. I love to kill penalties and just kind of help wherever needed. So, I’m excited to get in the mix here, identify my role here and embrace it.”

Like Hall and Reilly, Lazar has been around the block with stops in Ottawa and Calgary before signing with the Sabres in 2019. He hasn’t lived up to his billing as a 2013 first-round selection, but he found his footing as a prototypical fourth-line glue guy.

Amidst a tumultuous season in Buffalo, Lazar started to find a groove before suffering his injury against the Flyers on March 31. The Sabres snapped their franchise-record 18-game losing streak on that faithful night in Buffalo.

Lazar, signed through the 2021-22 season with an annual $800,000 cap hit, envisioned re-entering Buffalo’s lineup upon returning. Now he’ll face the Sabres six times — five when he heals from injury — hoping to deliver some payback to his former squad.

“I look forward to sticking it to them,” Lazar said. 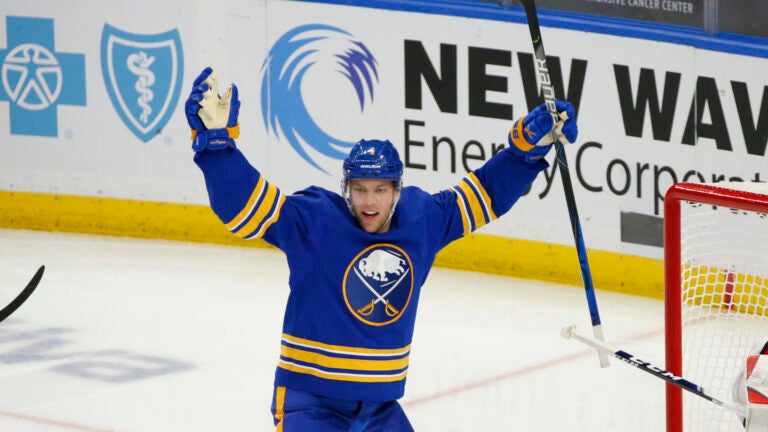 Sports Q: What grade would you give the Bruins for their deadline deals?