While former MVP Taylor Hall is the headliner of Sunday’s trade with the Sabres, the Bruins also acquired center Curtis Lazar in the three-player deal that sent Anders Bjork to Buffalo.

Lazar, 26, is a defensive-minded bottom six forward with another year left on his deal at $800,000. Here’s what you need to know about him.

Injured but expected back soon

Lazar suffered a lower-body injury in Buffalo’s 6-1 win over Philadelphia on Mar. 31 and hasn’t played since. Listed as week-to-week, Lazar said Monday he is healthy and had planned to join the Sabres on their current road trip, which continues in Boston on Tuesday.

“I stayed back to get some conditioning skates in, but I’m pretty much good to go now,” he said. “So it’s kind of perfect timing there. I got some extra work in the gym, but I’m definitely an option pretty much right away. … I guess I kind of am meeting Buffalo in Boston. This time I’m just playing for the other team.”

The British Columbia native burst onto the scene as a 16-year old in the 2011 Canada Winter Games, scoring 12 goals in six games to lead Team British Columbia to the gold medal. His 17 points in the tournament, which included a hat trick in the championship, broke the scoring record previously held by Steven Stamkos and Sidney Crosby.

He then starred for the Edmonton Oil Kings in the Western Hockey League, recording 168 points in three full seasons as his team captured the Ed Chynoweth Cup as WHL Champions in 2012. Lazar also represented Team Canada in the 2015 World Juniors, serving as team captain on the gold medal squad that included Conor McDavid, Max Domi, and Sam Reinhart.

Up and down NHL career

The Ottawa Senators drafted Lazar with 17th overall pick in the 2013 NHL Draft and he made his debut in 2014. Lazar recorded 15 points (6 goals, 9 assists) and 20 points (6 goals, 14 assists) during his first two seasons with the Senators, the two highest point totals of his career.

After his production stalled in 2016-17, Lazar was demoted to the AHL before Ottawa traded him to Calgary at the trade deadline. He played the 2017-18 season with the Flames, but spent the following year with the Stockton Heat in the AHL.

Lazar signed a one-year deal with Buffalo in 2019 and recorded 10 goals and nine assists in 71 games with the Sabres the last two seasons.

Ate a hamburger on the ice

On March 19, 2015, the Senators beat the Bruins, 6-4, and fans threw hamburgers on the ice in support of goalie Andrew Hammond, who had a Hamburglar painted on his mask. During the handshake line, Lazar picked up one of the hamburgers off the ice and ate it as he skated into the locker room.

That burger really could have used some ketchup! Cmon people!!! 🍔🍔🍔 great win for the fellas #sensbaby

Lazar and his wife, Reanne, welcomed their first child into the world on April 4. Owen Beckham Lazar was born on Easter Sunday in Buffalo.

Visit This Mass. city may have just logged its lowest voter turnout ever 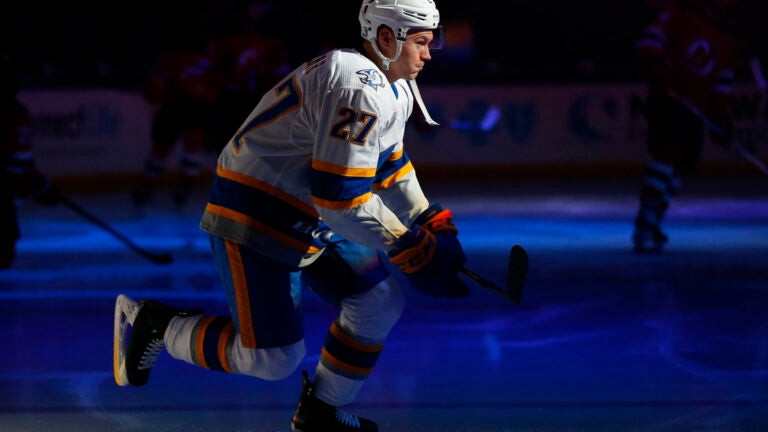