It must have felt like Groundhog Day for the Boston Bruins.

Friday’s tilt with the Buffalo Sabres completed a rare instance of facing the same opponent three straight times. They entered the evening without Patrice Bergeron (lower-body) after the Bruins scratched him from the lineup before puck drop.

In the middle of their jam-packed end-of-season slate, the Bruins succumbed to mental and physical fatigue. Their execution in all three zones looked off all night.

The lowly but opportunistic Sabres pounced. Sam Reinhart started a stretch of five straight goals for the Sabres following his first-period equalizer. He ended the night securing a hat trick with the third-period empty-netter for Buffalo’s first win of the season over Boston.

Bruce Cassidy could only watch as the defensive breakdowns, ill-timed penalties, and whiffs on pucks in the attacking end piled up. Yet, they somehow made things interesting coming back from a 5-1 deficit.

Arttu Ruotsalainen and Reinhart extended Buffalo’s lead to four. The former ended Tuukka Rask’s night after a distant point shout found its way to the back of the net. The latter earned his second of the night after Jaroslav Halak — in his first game since exiting COVID-19 protocol — whiffed on a pass attempt leading to an easy tally.

The Bruins could’ve folded. They didn’t. Nick Ritchie scored his second goal in as many nights to cut Buffalo’s lead to 5-2 at 12:06 of the final stanza. Kevan Miller earned his first marker since December 2017 a mere 3:19 later and Taylor Hall notched his fifth of the season to put the Bruins within striking distance with 2:48 left.

But another blunder prevented the Bruins from completing the comeback. A struggling David Pastrnak saw the puck explode off his stick in a prime shooting position prompting an ill-timed turnover leading to Reinhart’s empty-netter at 19:18.

“I think some guys have been fighting [fatigue] for a while and other guys could’ve fell into that category,” Cassidy said in his assessment of the team’s fatigue and execution level from Friday’s 6-4 loss. “We lost some battles tonight, and I thought our breakout at times looked very good, but other times we just self-inflicted. And I think the guys just fell into different categories — you can make the assumption there — but clearly, as a whole, it wasn’t good enough to win most nights.”

Amidst their battles with fatigue and poor puck handling, the Bruins nearly pulled another rabbit out of a hat. Instead, they failed to gain significant ground on the Capitals, Penguins, and Islanders in the East Division standings.

Here’s what we learned as the Bruins depart for Pittsburgh for a pivotal two-game slate with the Penguins.

The Bruins didn’t envision significant changes to their lineup beforehand aside from Kevan Miller’s return on the back-end. But, for the first time this season, Boston’s medical staff kept Bergeron out of Friday’s matchup in Buffalo after sustaining a lower-body injury from a blocked shot during Thursday’s 5-1 win.

In their second of a back-to-back and third game in four nights, the Bruins took the usual route of skipping the morning skate. The second line of Hall, David Krejci, and Craig Smith remained the only holdover of the four forward trios from the night before.

Charlie Coyle, fresh off snapping a five-game point drought on Thursday, filled Bergeron’s top-line center spot next to Pastrnak and Brad Marchand. Cassidy then promoted ex-Sabre Curtis Lazar to center Ritchie and Jake DeBrusk on the third line. Sean Kuraly moved over to Lazar’s fourth-line center vacancy with Anton Blidh and Chris Wagner on opposite wings.

Working with a makeshift lineup, the Bruins forwards hardly found their skating legs for a good two-thirds of Friday’s tilt in Buffalo. The desperation from their comeback bid gave them a late jump, but they found themselves fighting with the dreaded fatigue factor more often than not.

The Bruins clearly missed Bergeron’s two-way skillset Friday night. Yet, Bergeron’s fellow peers didn’t use his absence as a cop-out.

“Obviously, he’s our No. 1 center, so we miss him in these situations, but we have a pretty good team — we have depth. In the past, we’ve won games with him out of the lineup. We’re fortunate this year that we haven’t had to play without him — he’s been healthy,” Cassidy said.

“But I’m not going to say ‘hey, we lost the game because Bergy wasn’t playing.’ He’s a big part of every facet of our game, but there are certainly other guys capable of [performing]. I don’t think he had any effect on guys not being hard enough on pucks or playing a more determined game. That’s on the individual and on me to get it out of them. Like I said, we miss him, but he’s certainly not the cause for defeat tonight.”

Cassidy confirmed Bergeron’s day-to-day status in his postgame Zoom meeting. The Bruins haven’t done all that poorly in previous instances where Bergeron missed time as Cassidy alluded to. But for sure they’d like their four-time Selke winner back in time come 3 p.m. Sunday in Pittsburgh.

The Bruins didn’t have Pastrnak’s services for the first few weeks of the season after the 2014 first-round selection recovered from off-season hip surgery. Upon his return, it didn’t take long for Pastrnak to re-establish his scoring touch.

The dynamic Czech playmaker appeared on track for another Rocket Richard Award after notching a whopping nine goals in his first nine games. But his stint on the COVID protocol list and subsequent return to the lineup cooled his torrid pace.

Pastrnak was slowly finding his scoring touch again, carrying a five-game point streak into Friday. Yet, even during this recent run, he hardly looked like his usual self, especially on Boston’s struggling power play.

The ugly trends came back to haunt Pastrnak in the series finale with Buffalo. The whiffs on one-timers and the overthinking puck-decisions haunted Pastrnak in inopportune times, none more evident than in the closing moments with the Bruins in striking distance late in regulation.

Pastrnak set himself up perfectly for his trademark one-timer in the left face-off dot with under a minute left in regulation. But failed to handle the puck cleanly on the setup leading to an inopportune turnover for Lazar’s empty-netter.

The Bruins finally have some scoring depth following Hall’s trade deadline arrival. The second line finally compliments the potent top trio of Marchand, Bergeron and Pastrnak. But the Bruins would like nothing more than for Pastrnak to regain consistency to turn the top-six into a well-oiled machine.

Miller and Kampfer took no consolation in scoring.

The final scoresheet rarely lists Miller or Kampfer on the list of goal scorers on any given night. But on a bizarre night full of mistakes and a near comeback bid, Boston’s veteran blue-liners provided the team with an unlikely scoring touch.

With their cleanest zone entry of the night, Kampfer kicked things off scoring his second goal of the season on a timely feed by Hall.

Taylor Hall with a clean zone entry — and he sets up a goal for Steven Kampfer.

The Bruins had a 1-0 lead going for them on Kampfer’s tally only to watch the opportunistic Sabres score five straight goals from the 15:40 mark of the opening stanza to Reinhart’s second of the night a mere 4:30 into the third.

Instead of caving, the Bruins somehow nearly pulled it off. The oft-injured Miller, returning to the lineup after missing five games with a foot infection, found himself in the middle of the comeback bit after cutting the lead to 5-3 with 4:35 remaining.

Kevan Miller with his first goal since Dec. 27, 2017: pic.twitter.com/3iMpgvrRAL

“We were obviously making a push,” Miller said. “It would’ve been nice to finish it off, but it’s nice to score every now and then.”

“No,” Kampfer said bluntly regarding the consolation of his three-point performance. “Team win will always trump any personal accolades you have. It’s about the team, it’s about getting two points, and it’s about 20 guys in the room winning.” 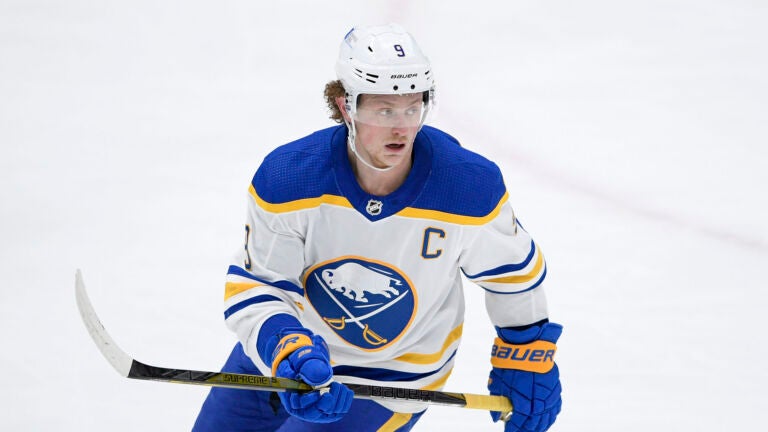