The National Hockey League recently signed separate television deals with ESPN and Turner Sports. The contract begins next season and runs through the end of the 2027-28 campaign.

Instead of opting for one majority package as they did with NBC since the 2005-06 season, the NHL gains one extra outlet, adding another layer of exposure to consumers. In turn, this will provide additional opportunities for players and coaches to launch second careers once they hang up the skates or turn in their whistles.

Whether players choose to go this route upon retiring or want to go into coaching or a front office is anyone’s guess. But some of the personalities inside Boston’s locker room seem primed to head into analyst or commentator roles on a local or national level — in the U.S. or Canada — once their playing or coaching days conclude.

The NHL could use some fresh faces in the media landscape. But some of the names on this list are years away from exiting the playing or coaching stage. But for projection’s sake — through my past interactions and general observations of handling their day-to-day obligations — I present to you a list of four Bruins who would shine in the media.

We start with an obvious choice here, based on soundbites alone.

More often than not, Marchand backs up his chirps and expressive wording with his on-ice play. Regardless of if Marchand gives an expletive-laden interview — seen during an intermission Q&A with NESN’s Sophia Jurkstowicz following Tom Wilson’s cheap shot on Brandon Carlo — or goes into Bill Belichick mode as he did following Boston’s 2019 second-round win over Columbus, the ‘little ball of hate’ always gives the media something to work with.

His charm and wit resonate in front of a camera in scrums and 1-on-1 interviews. But Marchand also provides insight beyond the soundbites. One instance in particular that stands out came after Wilson’s late hit on Carlo when I asked him about Jared Tinordi, playing in his second game with the club, leaving a good impression with his new teammates after challenging Wilson to drop the gloves in the second period of Boston’s 5-1 win over Washington on Mar. 5.

“From the second he got here, he’s been a great teammate. He’s been a great player when he’s been in the lineup and that’s another element he brings,” Marchand said of Tinordi. “He’s tough, he’s willing to stick up for his teammates and he showed that tonight. It was the turning point of the game. He stepped up, had a great fight and we just rolled from there.”

A simple yet effective statement. But Marchand’s outspoken nature doesn’t end with his remarks following practices or games.

Off the ice, his charitable side blossomed through his work as an ambassador with the ‘Hockey is for Everyone’ campaign. He’s spoken out against homophobia via social media and against racial injustice during the tumultuous summer of 2020.

TNT’s award-winning ‘Inside the NBA’ crew featuring Ernie Johnson, Kenny Smith, Charles Barkley and Shaquille O’Neal mesh cohesively through their on-court breakdowns, humorous segments like ‘Shaqtin a Fool‘ and social justice commentary. If the producers and higher-ups at Turner want to go in a similar direction with their NHL studio coverage, they should look no further than Marchand once he calls it a career. Imagine an analyst crew featuring Marchand, Roberto Luongo and P.K. Subban? Now that would provide quality entertainment.

As an insight into his personality, Marchand’s clever social media accounts are full of jabs at current and former teammates and addsanother significant element for his profile. If his viral “beef” with Torey Krug is any indication, imagine his digs at Subban, Luongo and any of his potential media colleagues.

He’s 3 seats behind you! Just tell him.

Regardless if he chooses to go the local or national media route, Marchand will have plenty of suitors lining up for his services if he wants a second career on television.

I’ve had the luxury of asking questions to some of the great coaches in the world of hockey, including Jack Parker, Jerry York and Claude Julien. Each provided unique insight into X’s and O’s without revealing their full game plans.

But in my decade-plus coverage of the sport, I’ve learned more about the game through Bruce Cassidy.

Cassidy’s respect toward the media resonates with his responses. Informative and at times humorous, Cassidy always gives reporters something to work with.

The fifth-year Bruins bench boss would provide a casual hockey viewer an informative glimpse of what makes a play, a line or a certain unit cohesively work. His sense of humor also provides a positive. His light-hearted fun at times can come at an expense of any reporter, including yours truly, as seen in a 2019 press conference following the Patriots’ latest Super Bowl triumph.

“It’s the No. 1 goal…it’s us and the @Celtics next. We’re looking forward to the challenge.”#EverythingWeGot pic.twitter.com/6bvc770gWn

Cassidy’s insight and quick-wit check off the potential media personnel boxes. Sometimes he can roll that all into one. Case in point: a postgame press conference following Game 1 of the Eastern Conference Final responding to another one of my queries regarding Marchand’s situational awareness.

“He’s turning over a new leaf, eh Marshy?” Cassidy said in one of his clever responses before fully analyzing the events surrounding Marchand pulling Connor Clifton aside against the Hurricanes.

“Listen, he’s been in these big games. He’s a Stanley Cup Champion, so he understands maybe a little more than meets the eye sometimes. There’s a time and a place to be disciplined — and you have to be disciplined all the time — but at other times you have to keep yourself in check. It was great for him to do that…”

Of course, gaining chemistry with a play-by-play broadcaster takes time. But given his daily interactions with the media, any viewer would have some fun learning from Cassidy’s analysis as a color commentator.

Unlike Marchand or Cassidy, the Weymouth-born forward rarely provides the clever quotable. But his well-spoken responses provide plenty of depth for a quality interview.

Coyle comes across as a player living his dream playing for the hometown team. Whether he’s in the middle of a slump or riding a multi-game point streak, Coyle rarely sidesteps any question.

“I think the thing I found out is you have to make sure you’re bringing something. Maybe you’re getting chances — and maybe it’s going in and maybe it’s not — but you got to bring something to the table and help your team win,” Coyle said about his recent slump. “I think when you go back to those basics — when you’re not scoring — that’s what you have to do. I have to make sure I’m reliable defensively, I’m in on the forecheck, being a big body out there, creating space, move my feet…and those are all things I can be better at too.”

Sometimes, those little things get lost within a 60-minute broadcast. Andy Brickley and Bob Beers have done a wonderful job analyzing those attention to detail moments through their work as color commentators.

Coyle provides some of that insight too through his quotes. And he isn’t afraid to showcase an upbeat personality through his social media, especially during his friendly battle with ‘the Mayor of Walpole’ Chris Wagner during Harpoon’s annual release of their ‘Don’t Poke the Bear’ brew.

From his experience with the media — both virtually and in-person — Coyle’s articulate skillset would help convey his insight into a local studio or color analyst role. It might even work to a degree in a color commentator role. He may need a little polishing, but NESN, 98.5 The Sports Hub or even NBC Sports Boston would greatly benefit from having the Weymouth native discussing all things Bruins.

DeBrusk followed in his father’s footsteps of an NHL career. Perhaps he’ll take another similar trail as Louie down the road.

Louie DeBrusk has done pretty well for himself as a Rogers Sportsnet commentator following a decade-plus long career as an enforcer. One of his top broadcast highlights came over a year ago in Edmonton during a father-son interview prior to the Bruins-Oilers contest.

A father/son interview for the ages.

Just a few days left to vote for the #NHLFanChoice Awards! Toss yours in now for Louie (@LouDeBrusk) and Jake DeBrusk (@JDebrusk) for Best Feel-Good Moment! ➡️ https://t.co/nyeIMquo6y pic.twitter.com/XJFjSLH2Rx

Unlike the other names on the list, the 24-year-old DeBrusk is further away from the end of his career. He’ll speak about any topic to reporters. At times, he’ll throw in a pop culture reference or two as he did when discussing his time in COVID protocol.

And he isn’t shy discussing the business side of hockey either. One example came when he inked his recent contract extension before the 2021 season where he shared his thoughts on entering the negotiation process during the pandemic and how the two sides mutually agreed on a bridge deal because of the variables at play.

DeBrusk, who returned from a social media layoff after receiving death threats from Maple Leafs fans during their first-round series in 2019, gets along well in a professional manner with the media. I’ve always enjoyed my conversations with him, whether I need a quote for a story or just shooting the breeze after a practice session. His outgoing personality would shine on the television screen. Any media entity should keep its eyes on DeBrusk over the next decade. 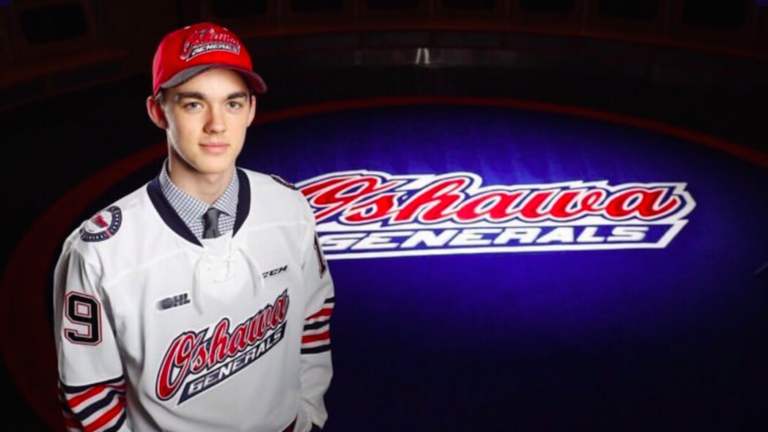