With two totally different lineups, the Boston Bruins and Washington Capitals rarely showed their hand ahead of their upcoming first-round series.

A day removed from securing the third spot in the East Division, Bruce Cassidy rested eight of his top nine forwards, his six regular blue-liners and his top netminder in Tuukka Rask. Across the sheet, Peter Laviolette trotted out a rather full lineup with Alex Ovechkin, Zdeno Chara and Tom Wilson (to name a few) taking part in the regular-season finale.

The two teams exited Tuesday’s tilt rather unscathed. Now they’ll turn their attention to preparations for a grueling seven-game series ahead of them, beginning Saturday night in Game 1.

Here’s what we learned from Washington’s 2-1 victory.

Jeremy Swayman earned his backup role for the playoffs.

Swayman’s last start of the year likely wasn’t a complete indicator of whether he’d officially secure the backup goalie spot behind Tuukka Rask for the postseason. But, even with allowing Michal Raffl’s winner on a tough angle with three ticks left in regulation, the former UMaine standout made one more good impression on the coaching staff following his 30-save outing.

“Yeah he will be [the backup],” Cassidy said of Swayman. “I think he’s earned that.”

For the better part of the last three years, Jaroslav Halak provided a stable hand serving as one half of a dynamic goaltending tandem with Rask. But his COVID setback and inconsistent play upon returning from protocol put the veteran in a tough spot.

Swayman found himself with a significant opportunity to contribute with Halak succumbing to COVID and Rask nursing an upper-body injury. Following a stellar run in Providence, the upbeat Swayman provided the Bruins a chance to win in each of his 10 starts. He ended his first regular season with a 7-3-0 mark, a sensational .945 save percentage and a stingy 1.50 goals-against average.

“Obviously it was a tough call with Jaro and his experience, but he just just played more down the stretch there, Swayman. Some of that was out of circumstance — Tuukka got hurt, Jaro went into COVID, so there’s a quarantine and for a goalie it’s a little tougher to get thrown back in there,” Cassidy added regarding his backup goalie decision. “I thought Swayman grabbed the ball and ran with it.”

Who knows if we’ll see Swayman appear in the playoffs. But his promising run kept a transitioning Bruins squad afloat while securing the club’s future in net.

The J.V. Bruins ‘rose to the occasion.’

With nothing to play for in the standings, Cassidy opted to keep his veterans home in Boston for some needed rest. The banged-up Caps opted to give extra work to some of their core for a little extra conditioning ahead of Saturday’s series opener.

“It’s funny for a new guy like myself. I didn’t know 60 percent of them before tonight,” the ex-Sabre Lazar said. “But we fought hard. There are a lot of good things to take away from this game, and I thought they rose to the occasion.”

A handful of Bruins from Tuesday’s lineup will serve as ‘black aces’ for the playoffs. Others may have played their last game of the year.

Given the scenario entering the regular-season finale, the collective effort from the young group provided promising results.

“I thought they played better as the game went along,” Cassidy said of his young lineup. “We tried to encourage them that they belong here. It’s a good team we’re playing and the circumstances were a little unique with the last game of the year. For some of them, it might be the last game they play. And for others, if we have a run we want to have, then an opportunity may knock for you down the road, so put your best foot forward.”

A healthy core preps for a potential deep playoff run.

Charlie Coyle missed the last four games with an upper-body injury. Ondrej Kase exited Monday’s matchup in his first game back from a 52-game absence.

Aside from the late-season developments, the Bruins will have a relatively healthy lineup entering Game 1. They may also have a bottom-six reinforcement returning in Coyle come Saturday night.

Cassidy frequently used makeshift lineups because of injuries and COVID protocols during the pandemic-shortened season. But now here we are in mid-May. The Bruins are fresh off playing their best hockey of the season post-trade deadline. They received significant returns on the back end — including Brandon Carlo and Kevan Miller — during that stretch.

In the process, the Bruins transitioned from a fringe playoff team to a potential Stanley Cup contender. But they’ll have their hands full outlasting the Caps in Round 1, and, if they advance, the Islanders or Penguins in Round 2.

The Bruins overcame several obstacles to secure their fifth straight postseason berth. They enter the second season with their cleanest bill of health. But after three years of disappointing playoff exits, they know their success will depend on overcoming a 10-year Cup drought at season’s end.

“You go into the year and you want to be a top team. I think we’re in that group. Are we definitively the top team? No. That’s open to debate and that’s why the playoffs determine that. So that’s how you’re going to be judged — and that’s how you’re judged in Boston. It will be no different this year,” Cassidy said.

“We’ve got a tough opponent in front of us, but so does Washington, so does Pittsburgh and so do the Islanders. It’s a tough division, so may the best team win and we’re preparing to be that team. And the good news is, we’re healthier than we’ve been all year. So that’s the positive for us going in, and hopefully that pays off.” 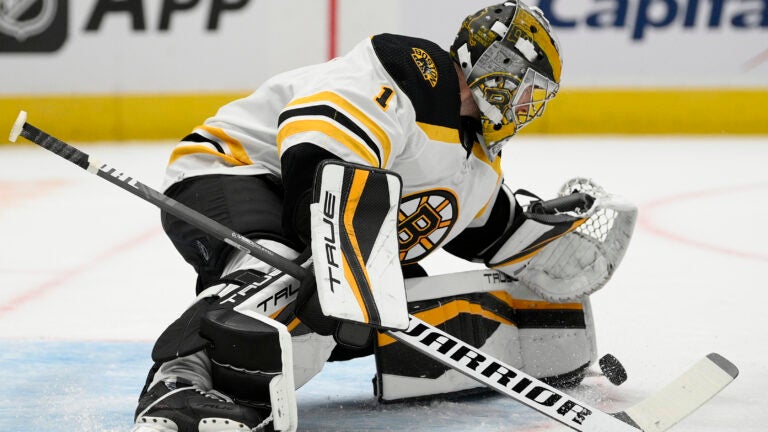