The Bruins defeated the Islanders 2-1 in overtime on Thursday in Game 3 of the second-round playoff series. Boston, now leading the series 2-1, will face New York on Saturday in Game 4. at 7:15 p.m.

Also on Thursday, the Red Sox defeated the Astros 5-1, and now head to New York for a three game series against the Yankees (starting tonight at 7:05 p.m.)

And the Premier Lacrosse League gets underway at Gillette Stadium this evening at 7 p.m.

Brad Marchand’s view of Tuukka Rask’s Game 3 performance: In the end, it was Bruins winger Brad Marchand who won it for the Bruins in Thursday’s dramatic playoff clash against the Islanders. Marchand’s overtime goal ensured that Boston not only won Game 3, but took a vital 2-1 lead in the series.

Yet afterward, Marchand made sure to credit Boston goaltender Tuukka Rask for keeping the game going long enough for the 33-year-old to be able to work his magic.

“Tuuks made some really big saves,” Marchand explained. “They had some really good looks and were really bearing down [in OT]. When the time came, he kept us in it, giving us those extra few minutes to get our game going.”

Despite dominating much of the game, Boston was unable to muster much offense in the early part of the overtime period. The Islanders created several potential game-winning chances, but each time Rask answered with crucial saves.

The saves set the stage for Marchand, who scored his second overtime winner of the 2021 playoffs.

Trivia: Tuukka Rask was a first-round pick by Toronto in the 2005 NHL Draft. He actually wasn’t the first goaltender selected in that year’s draft. Name the only goalie taken ahead of Rask.

Christian Arroyo’s first home run of the season was a timely one: The three-run blast in the second inning on Thursday helped Boston avoid a four-game sweep at the hands of the Astros.

The U.S. men’s soccer team advanced to the CONCACAF Nations League Final: The U.S. will face Mexico on Sunday at 9 p.m. in the final thanks to forward Jordan Siebatcheu’s late winner against Honduras on Thursday.

On this day: In 1967, a collection of some of the greatest Black athletes in America got together for what was later called “the Cleveland Summit.”

Led by Jim Brown, the group — which included Bill Russell and Kareem Abdul-Jabbar (then Lew Alcindor) — spoke with Muhammad Ali about his decision to not accept draft induction into the U.S. Army. Ali had been stripped of his heavyweight title and faced the charge of draft evasion.

Unlike the popular myth that still surrounds the event, the athletes did not gather for the sole purpose of rallying around Ali’s position. Instead, as The Undefeated’s Jonathan Eig pointed out in a 2017 piece (and as others, including Abdul-Jabbar, have noted in subsequent books) the initial reason for the summit was more complicated and business-oriented.

But in the end, Ali was immovable, refusing to change his stance against the draft and the escalating U.S. involvement in the Vietnam War. Unable to change the mind of the charismatic boxer, Brown and the rest of the group ultimately did support Ali, living up to the public image of the event.

“In this case,” wrote Eig, “the full story works just as well, if not better, than the myth.”

Russell would reference the event in a Sports Illustrated column later that year, offering an apt summary of the relationship of Ali and the world around him.

“I’m not worried about Muhammad Ali,” wrote Russell. “He is better equipped than anyone I know to withstand the trials in store for him. What I’m worried about is the rest of us.”

Daily highlight: Defenseman Troy Stecher’s skillful moves set up Canada’s overtime winner on Thursday in the quarterfinals at the world hockey championships. Andrew Mangiapane applied the finish to give Canada a 2-1 win over Russia. 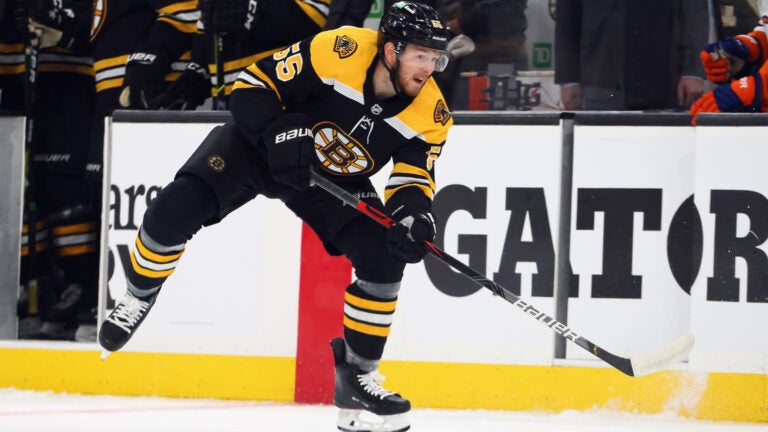 Projection: Here's who the Bruins are likely to protect in the NHL Expansion Draft