In its first-ever NHL broadcast, TNT wasn’t the only party who put forth a preseason effort.

Yet, even with stretches of dull play, the mismatch on paper proved true in Boston’s third preseason game. A pair of first-period power-play goals from Brad Marchand and Craig Smith – off of brilliant feeds by Taylor Hall and Nick Foligno – a Brandon Carlo blast toward the end of the first 20, and Jake DeBrusk’s second tally of the preseason on a strong net-front drive sparked the Bruins’ offensive output in their 4-2 victory.

Here’s what we learned as the Bruins enter the second half of their exhibition slate.

Hall looks like a keeper on the top power-play unit.

The Bruins finished with the 10th highest power-play percentage during the pandemic shortened 2021 campaign, even with some transitional pieces on the top unit. Charlie McAvoy eventually secured the point role on the top power-play unit with mainstays Brad Marchand, Patrice Bergeron, and David Pastrnak.

The Bruins enter the new season hoping to close a rotating door of net-front guys on the top unit. Cassidy gave Hall the first chance at earning a PP1 role on Thursday. Despite limited – if any – experience skating with Marchand, Bergeron or Pastrnak, the veteran winger didn’t disappoint, providing a stellar assist on Marchand’s equalizer during his first shift with the top man-advantage unit.

“It was fun,” Hall said of his time on the top power-play unit. “[Pastrnak, Bergeron, Marchand, and McAvoy] are four really skilled guys in the league. That net-front position, I think it’s important. Just like that [Marchand] goal, I’ve got to get pucks back for those guys as I get more comfortable with them.”

Boston’s potent power play sparked the team toward the top of the league’s power-play rankings. And even a couple of years after losing Torey Krug, Hall’s addition may provide the Bruins with their most lethal top unit in recent memory.

DeBrusk is showing early signs of a bounce-back year.

It’s a small sample for sure, but DeBrusk has showcased the makings of a bounce-back season.

Perhaps desperation settled in early for the 2015 first-round selection following the worst season of his career. His work ethic and paltry scoring output led to line juggling and, at times, healthy scratches. An early-season injury, a COVID diagnosis and frustrations with the strict off-ice protocols only amplified DeBrusk’s forgetful 2021 campaign.

The fully-vaccinated DeBrusk doesn’t have to worry about strict protocols off the ice. On the ice, he’s developed initial chemistry with a pair of newcomers in linemates Erik Haula and Nick Foligno. He’s provided encouraging results with goals in each of his two preseason appearances.

“We’re trying to communicate out there, and I think we’re just both having fun,” Haula said of his initial chemistry with DeBrusk and Foligno. “Looking at this is a good opportunity. We have me, JD [DeBrusk] and Nick, and we’re just having fun and working hard. It’s nice to have a couple of bounces early, and just keep on building [chemistry].”

Like anyone, DeBrusk isn’t immune from encountering off nights in a long, 82-game regular season. The Bruins need his secondary scoring output, but they’ll happily take his ‘B’ game whenever he ends a night pointless. And on those nights where nothing goes right, DeBrusk can lean on another pair of battle-tested vets in Foligno and Haula.

DeBrusk’s hard-nosed net-drive effort against the Capitals and Flyers paid dividends. A combination of speed and strength suits him well in puck pursuit. Meshing the assertive attacking zone flow and play away from the puck will only serve DeBrusk well in his quest for a bounce-back year. And for sure, he’ll have a little more “fun” along the way. 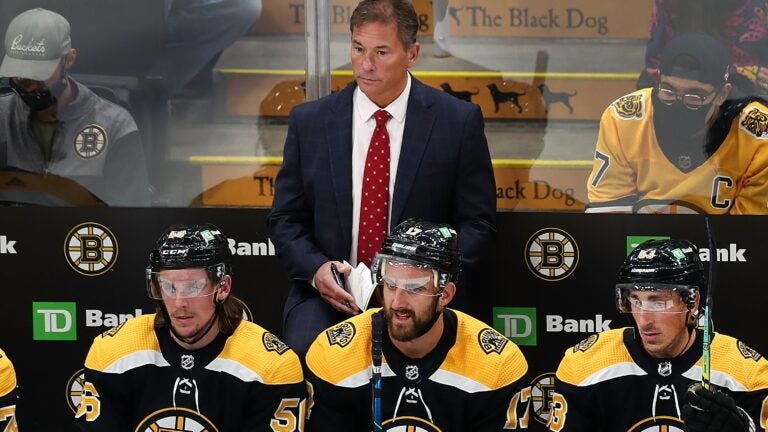