PHILADELPHIA (AP) — Cam Atkinson scored two goals, including the go-ahead score that sent him tumbling into the boards, in the Philadelphia Flyers’ 6-3 victory over the Boston Bruins on Wednesday night.

The Flyers have won two straight since dropping the season opener and a revamped roster has paid early dividends. Atkinson, acquired in a deal with Columbus, had the crowd going wild on his hustle-and-tumble goal only 58 seconds into the third for a 4-3 lead. Joel Farabee picked off a pass from Mike Reilly and fed to his right to a streaking Atkinson. Atkinson got tripped up and slid back first into the boards.

Travis Konecny beat Jeremy Swayman from the slot that made it 5-3 and had the crowd chanting “Let’s Go Flyers!” Sean Couturier knocked in an empty-netter, making it the second straight game the Flyers scored six goals.

No matter the outcome, each team was a distant second for overall interest in their respective city for the night. In Boston, the Red Sox lost to Houston in Game 5 of the ALCS. The 76ers opened in New Orleans but were on the minds of Flyers’ fans when a rousing ”(Expletive) Ben Simmons!” started and reached a crescendo right as Karson Kuhlman scored in the first period.

Atkinson earlier snagged the puck at center ice and beat Swayman on a breakaway for a 1-0 lead.

“I wanted to pass but obviously I decided to shoot and good things happen when I shoot,” Atkinson said.

Farabee pounced on loose puck in the crease and knocked it off Swayman’s stick for a 2-1 lead. Farabee, who signed a $30 million, six-year contract extension in the offseason, has a goal in all three games this season.

The Flyers stretched the lead to 3-1 only 2 minutes into the third on the sweetest goal of the game. Keith Yandle banged a long outlet pass off the boards, James van Riemsdyk hustled down for the rebound and his shot knocked off Swayman. Scott Laughton banged in the easy rebound.

The Bruins scored twice in the third to tie it 3-all. Taylor Hall was all alone when he beat Martin Jones top shelf to cut it to 2-1. The Flyers’ PA announcer had just said “last minute of play in the second period” when Brad Marchand knocked in his third goal of the season.

Jones stopped 37 shots in his first start of the season after signing a $2 million, one-year deal to serve as Carter Hart’s backup. Jones spent the last six seasons with the San Jose Sharks and led them to the 2016 Stanley Cup Final.

The Flyers went 2-4-2 against the Bruins last season — allowing 3.88 goals per game — but Atkinson, Yandle, Jones and Derick Brassard are among the new players brought in to help lead them back to the playoffs. Farabee, Atkinson and Brassard share a line.

Flyers defenseman Rasmus Ristolainen, a 6-foot-4 defenseman who was out with an undisclosed injury, and forward Zack MacEwen made their season debuts. MacEwen was claimed off waivers last week and visa issues delayed his start to the season.

Bruins: At Buffalo on Friday night.

Flyers: Wrap up a four-game homestand Saturday against the Florida Panthers. 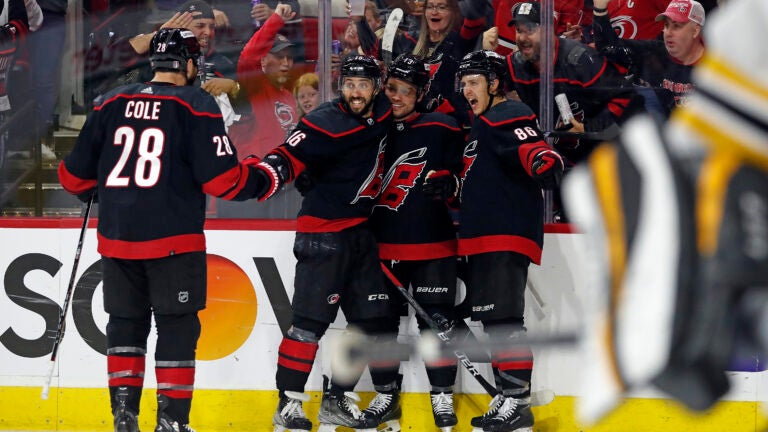