The Bruins can “sway” a little easier now.

Following a tumultuous turn of events before Tuesday’s 2-1 loss to the Detroit Red Wings, the Joe Sacco-led Bruins traveled to Nashville and earned a 2-0 win over the Predators in their second game without Brad Marchand. Given the circumstances, a trip to the Music City provided some much-needed relief.

Ironically enough, the subject of one of the more newsworthy items from Boston’s hectic week put his team in the proverbial driver’s seat. The Bruins capped off a solid first period with Jake DeBrusk lighting the lamp for his fourth goal of the season on the tail end of their first power-play attempt.

Brandon Carlo, another highly critiqued Bruin of this early season, blasted home his second of the season to give the Bruins a 2-0 cushion a mere 30 seconds into the middle stanza.

Aside from hitting iron on a quartet of scoring chances, including a pair of crossbars by Erik Haula, the Bruins had their mojo from the get-go in all three zones. Jeremy Swayman saw plenty of traffic but limited the secondary scoring chances with his stout rebound control en route to a career-high 42 saves.

All this accumulated to a needed bounce-back win Thursday night at Bridgestone Arena. Here’s what we learned from Boston’s triumph.

Swayman rebounded his way to a shutout.

With Tuukka Rask’s potential return looming, Swayman and Linus Ullmark both have a limited number of chances left to impress Boston’s brass. The latter hit another rough patch Tuesday, allowing a pair of untimely markers against a rebuilding Red Wings squad despite the Bruins holding a 42-16 edge in shots on goal. The former entered Thursday hoping to limit his struggles with rebounds as of late.

The Preds peppered Swayman with 42 shots on net. The former University of Maine standout remained square to the puck all night, limiting Nashville’s secondary opportunities. He handled every rebound exquisitely, sending his initial stops into the corner or freezing the puck upon first glance.

For the most part, Swayman saw the puck cleanly. As seen with Derek Forbort’s attentive decision during Nashville’s third-period barrage, Boston’s defense came to his aid in the rare instances he lost track.

“I felt between my posts. I wasn’t chasing pucks,” Swayman said to the media following his third career shutout. “It was a good week of practice. The [first] two games I didn’t start, so I was definitely focusing on that, and I thought I came out to play tonight.”

Given the recent trend giving one of the netminders another start following a decent outing, Swayman will likely return to the crease on Saturday. If so, he’ll face the stiffest test of his young career against the two-time defending Cup champion Tampa Bay Lightning.

The first impression following his trade request might have left some of the rumored teams in the DeBrusk sweepstakes in second-guess mode. The Edmonton-born winger fired a paltry one shot on goal and landed a single hit in a little over 10 minutes time on ice during Tuesday’s outing.

The fallout of the trade request continued with Taylor Hall revealing how DeBrusk approached the team following the news. DeBrusk declined to speak to the media on multiple occasions.

There’s likely nothing DeBrusk can or will share that hasn’t hit the public sphere already. For now, he’ll let his play speak for itself, good or bad.

DeBrusk showcased flashes from his early success in Thursday’s matchup. Even though he only notched a couple of shots on goal in 10:48 of action, the 2015 first-round selection had his feet moving every time he touched the ice. It all came together at 14:38 of the opening stanza, providing a needed opening goal for all parties.

“I think so, and I think that Jake played pretty good tonight,” Sacco said on sensing a relieved DeBrusk following his fourth marker of the year. “He had a good game, and hopefully, he can build off of that too. Like I said before, we just want Jake to help the team in any way possible, and he helped us with a big goal tonight.”

With Marchand’s suspension and Anton Blidh’s injury, DeBrusk will likely see at least one more game in a Bruins uniform barring any trade or other development before Saturday’s contest with the Lightning.

The Bruins have another tough obstacle following Jakub Zboril’s injury.

Even in their first shutout of the season, the Bruins couldn’t escape another tough development.

Boston’s D found itself shorthanded for most of the second half of Thursday’s tilt after Jakub Zboril exited with a lower-body ailment following a tough but clean collision with Predators forward Tanner Jeannot. Favoring his right knee, Zboril needed assistance from Hall and Patrice Bergeron on his way to the visiting dressing room.

After initial struggles gaining traction in Boston’s organization following his first-round selection in 2015, Zboril slowly found his niche once he re-entered the lineup in a 5-2 win over the New Jersey Devils on Nov. 13. The Czech developed chemistry with fellow up-tempo blue-liner Mike Reilly, forming a reliable third defensive pairing for Boston’s coaching staff.

Despite the high shot totals, the Bruins didn’t deviate from their defensive structure without Zboril in one of their cleanest outings this season.

“When we went down to five [defensemen] there, it was kind of hard,” Carlo told NESN’s Sophia Jurksztowicz. “But overall, I think we did a good job keeping our shifts short without a defenseman, and that really helped us get through the rest of the game.”

The Bruins will have a day off on Friday. Again barring any quirky developments, they’ll likely put Clifton back with Reilly come Saturday.

“That would be the logical choice right now unless something changes,” Sacco said.

Quite frankly, the Bruins can’t afford any changes before their first matchup with the Lightning since the 2020 playoff bubble. 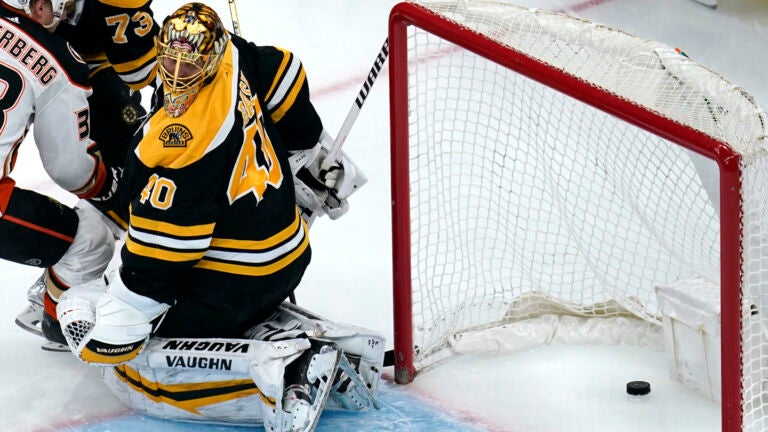