At one point Saturday night, the Calgary Flames held a 2:1 margin in shots on goal against the Boston Bruins. Yet, the oddities of hockey benefitted the Bruins in the finale of their three-game Western Canadian trip.

Charlie McAvoy gave the Bruins a 3-0 second-period cushion on just their 11th shot on net. At that point, the Flames had fired 22 shots at Linus Ullmark, yet found themselves in chase mode after Connor Clifton netted his first of the year late in the first and Brad Marchand tipped home his second tally since returning from suspension early in the middle stanza.

The Flames kept pushing. They eventually found the back of the net on Matthew Tkachuk’s power-play tally off an Ullmark rebound. They earned another marker in garbage time on Sean Monahan’s fourth of the season.

Amidst the push, the Bruins countered with a healthy 5v5 attack. They added a needed insurance marker on Curtis Lazar’s second of the season — all coming in his last four games — to secure a 4-2 victory at Scotiabank Saddledome.

The Bruins hold a playoff position for the first time this season after jumping the Detroit Red Wings for the East’s final wild-card spot. Here’s what we learned after the Bruins picked up five of a possible six points while north of the border.

Ullmark picked up where he left off

Tuukka Rask’s stint as an emergency backup goalie earlier in the week provided another wrinkle into his return plans.

The latest Rask development brought forth significant attention prior to Boston’s three-game road trip. A tandem featuring Rask and Jeremy Swayman heading into the second half of the season became an intriguing potential storyline within certain areas of New England.

Even with Swayman exempt from waivers, Ullmark’s roller-coaster season left fans wondering if the Bruins would try to move his four-year, $20 million contract through trade or waivers. Well, Ullmark’s performances in Edmonton and Calgary added yet another curveball.

Fresh off a 41-save outing against Connor McDavid, Leon Draisaitl, and the high-octane Oilers two nights prior, Ullmark picked up right where he left off. While his rebound control resembled his early-season struggles, Ullmark settled into a healthy groove amid the Flames pressure — especially on their five power-play attempts — en route to a 40-save performance.

“We grinded it out, and whenever we had the opportunity to put one in we capitalized on our chances,” Ullmark said of his on-ice support system. “That’s what got us the win tonight.”

Ullmark hardly took advantage of his early-season opportunities with his new club following his six-year tenure with the lowly Buffalo Sabres. Swayman’s performance and confidence with each start, meanwhile, widened the early-season performance gap.

The rookie netminder still holds the edge between the two following his stout outing during a losing effort in Vancouver on Wednesday. Yet, Ullmark closed that performance gap a bit after stopping 81 of 85 shots in his last two starts.

“Our goaltending has been good lately,” assistant coach Joe Sacco said. “It’s given us a chance to win.”

The Bruins may benefit from Rask’s presence upon his arrival. But Ullmark’s recent outings and Swayman’s encouraging progression provided a needed shot in the arm during a challenging period.

Well, the Bruins made the most of their 5v5 chances. Even with the 42-27 disparity in shots on goal, they kept pace with the Flames, ending the night with a slighter negative margin in 5v5 shots on net, 27-24. And all four of their tallies came at full strength.

The Bruins lit the lamp in various ways, beginning with Clifton’s first of the season on a tough angle.

The trend continued with Marchand’s brilliant tip on Pastrnak’s feed at the end of a shift, followed by McAvoy’s slick wrist shot finding its way past Jacob Markstrom a mere 56 ticks apart.

The Bruins survived Calgary’s push late in the second period to keep their 3-1 lead intact heading into the final stanza. The fourth line quickly went to work coming out of the locker room, with Trent Frederic setting up the scoring sequence with secondary chances off a hard drive to the net, ultimately leading to Lazar’s insurance marker.

“We were opportunistic at times,” Sacco said of Boston’s 5v5 play. “I thought in the second period, we made some good hockey plays and we got some pucks to the net. We had some good possession in a couple of the goals there, and then the big goal there was obviously the one in the third period. That was a good drive by our line there with Freddy and Laser [Lazar]. They did a really good job battling down low and getting to the net and attacking the net — things that line needs to do to be successful. So we were happy for that line to contribute in that way tonight.”

The Bruins checked off some significant items on their to-do list with Bruce Cassidy in COVID protocol. Now they look to build on those good habits — beginning with their 5v5 scoring uptick — upon Cassidy’s likely return this week.

The pandemic prevented fans across the sporting globe from witnessing any monumental achievement from athletes. Lucic found himself in that category after skating in his 1,000th game during the shortened 2021 campaign.

The Flames held a pregame ceremony for Lucic’s 1000th game without any spectators last season. They had another moment for Lucic’s achievement on Saturday with his former team in town, albeit with less pomp and circumstance. With a full house inside a classic NHL barn, the Saddledome faithful witnessed a video montage featuring a handful of Lucic’s former Bruins teammates and a stick tap from both benches during the first TV timeout.

Lucic tallied an assist and landed two hits and a pair of shots on goal in 11:51 of ice time. He even got into a bit of a scuffle against his former team during a brief exchange with Erik Haula.

Though his production declined significantly over the last years, Lucic’s seven goals in his first 28 games this year have him on pace for his first 20-goal campaign since 2016-17. He’s a little past his prime, yet the Flames have Lucic in a suitable spot on their bottom-six. They’ll only benefit from his leadership and experience heading into the latter half of their 2021-22 campaign. 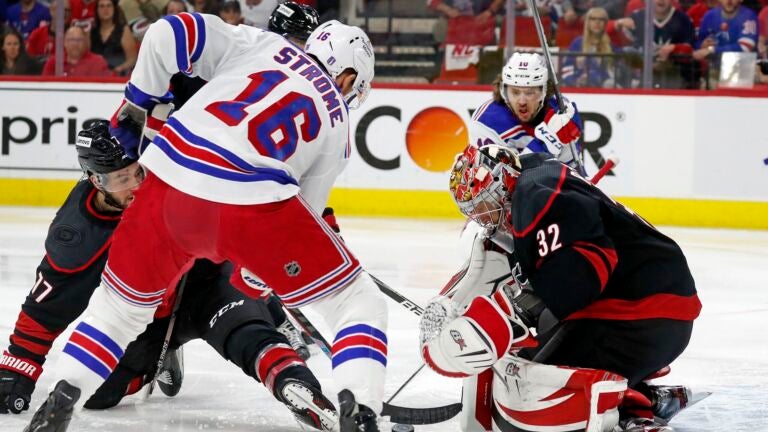