The Bruins scored six unanswered goals amid a rally to defeat the Capitals 7-3 on Monday night. Boston will be back at TD Garden on Wednesday night to play the Canadiens at 7 p.m.

The Celtics also won on Monday, downing the Pacers in overtime, 101-98. The two teams will play a rematch in Indiana at 7 p.m. Wednesday.

And Revolution players reported back to Foxborough to get the team’s 2022 training camp underway. New England will play its first preseason game on Jan. 29 against Los Angeles F.C.

Trevor van Riemsdyk on Brad Marchand: In the first period of the Bruins’ Monday night game against the Capitals, Brad Marchand was hit in the face with a high stick from Washington’s Nic Dowd.

Dowd received a penalty for the play, but Marchand stayed on the ice. In the ensuing power-play, Marchand assisted Boston’s first goal of the night to teammate David Pastrnak. And 40 seconds later, Marchand tied the game at 2-2 with a deflected shot.

“I don’t know, he’s probably had a ton of games with two goals where he didn’t get hit in the face,” noted van Riemsdyk, who complimented the 33-year-old winger. “He brings it most nights, and that’s why he’s such a good player. He plays hard, he’s tough and when you give him the opportunities he’ll take advantage.”

Bruins defenseman Matt Grzelcyk, who led Boston with five points on the night, credited Marchand for leading by example.

“It certainly didn’t come as any surprise to any of us,” Grzelcyk said. “When you get to see that each and every day, it’s extremely inspiring for us as teammates to want to follow in his footsteps. If your best players are working as hard as they do, it feels out to the rest of the group and there’s no excuse.”

Trivia: Brad Marchand isn’t the first accomplished Bruins player to come from Halifax, Nova Scotia. Which former Bruin achieved his best NHL season with Boston in 2002-2003, notching a total of 44 goals and 48 assists?

Hint: He was a Bruins first round pick in 1991 and also played for the Kings and Penguins during his career, which concluded in 2008.

On this day: In 2014, the Patriots pummeled the Colts 43-22 in the divisional round of the playoffs. Running back LeGarrette Blount ran for 166 yards with four touchdowns.

Daily highlight: Patrice Bergeron temporarily filled in at goaltender on Monday night after Linus Ullmark was briefly caught out of position. Bergeron blocked the shot with his body, saving a goal. 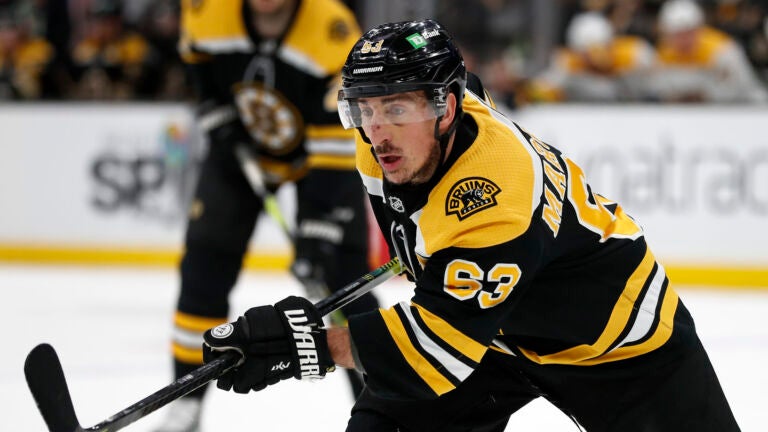