The first cuts are quickly approaching, and the Boston Bruins’ season-opening roster is slowly taking shape.

It also brought forth another preseason tilt for Oskar Steen and Jack Studnicka. Both young forwards provided the Providence Bruins with timely offensive production during their first few seasons of professional hockey. Still, neither could secure a full-time role in Boston following their stints with the big club.

Yet, as Tuesday’s tilt with the Rangers reached its final act, an unheralded name found himself at center stage with a breakthrough outing.

A two-goal performance from veteran forward A.J. Greer, capped by his overtime winner, further strengthened his case for one of the fourth-line vacancies.

From Greer to Steen and Studnicka, here’s what we learned from the Bruins’ 3-2 triumph over the Rangers.

Greer made another good impression.

The Montreal-born Greer arrived as one of the more under-the-radar candidates for a potential fourth-line role.

The former Boston University product spent his first five seasons in the league between the Avalanche and Devils organizations. To this point, he has a mere 47 career NHL games under his belt.

He fits every description for a fourth-line role: energetic, hard-nosed, and heavy-handed. An opportunistic Greer displayed those traits on Tuesday, and added an offensive touch with his second-period equalizer and overtime winner, both coming with Studnicka’s assistance.

“I’ve always seen myself playing the type of hockey that the Bruins play,” Greer said postgame. “To be here is a dream come true. I’m fortunate enough to be in the position I’m in, and I’m just trying to make the most of my opportunities.”

Greer’s performance throughout camp has made a competitive battle for the open bottom-six spots even more intriguing. He finds himself in the mix with Studnicka, Tomas Nosek, Nick Foligno and Marc McLaughlin. Another solid week could transition Greer from a dark horse candidate to a favorite to appear on Boston’s checking line in two weeks.

Either way, they need a solid string of preseason performances to establish themselves as potential candidates.

“It’s something I’m definitely aware of,” Studnicka said. “I’m just not trying to dwell on what-ifs and to show up every day and hope things go well.”

Steen had a relatively night comparably …until the third period.

The Bruins found themselves shorthanded with a 2-1 deficit early in the final stanza. It didn’t take long for them to strike on the penalty kill as Steen converted on Joona Koopanen’s feed during a 2-on-1 to tie things up at 2-2.

“I think I’ve come into this year with more confidence. And I’m just trying to be good every day and fight for the last spots on the team,” Steen said on his preseason approach. “It’s huge for me to come to the rink every day and do a good job.”

One half of Boston’s top defensive pair from Tuesday hopes to impress the brass enough to earn another NHL contract. The other half will be relied upon heavily early in the year with Matt Grzelcyk and Charlie McAvoy out.

Yet the Lindholm-Stralman pairing isn’t necessarily a one-off. Ideally, the Bruins could trot this same pairing out when they face Alex Ovechkin and company in 14 days.

Against a solid core of Ranger vets, the Swedes made a solid first impression as a duo, spearheading the Bruins in the transition game while providing a steady hand in the defensive end. The Bruins had a 17-5 edge in 5v5 shot attempts in 14:43 of the Lindholm-Stralman pairing.

“Calm, cool and collective,” Montgomery said of Lindholm and Stralman. “They had some great breakouts … they were really good.”

Lindholm will likely skate with McAvoy or Carlo with a fully healthy D core. Given all the other options, a steady veteran like Stralman provides an intriguing right-shot option on the third shot pair.

The shorthanded Bruins will have their hands full to start the year. Yet, they may have landed on a pair of reliable Swedish blue-liners ahead of their season opener. 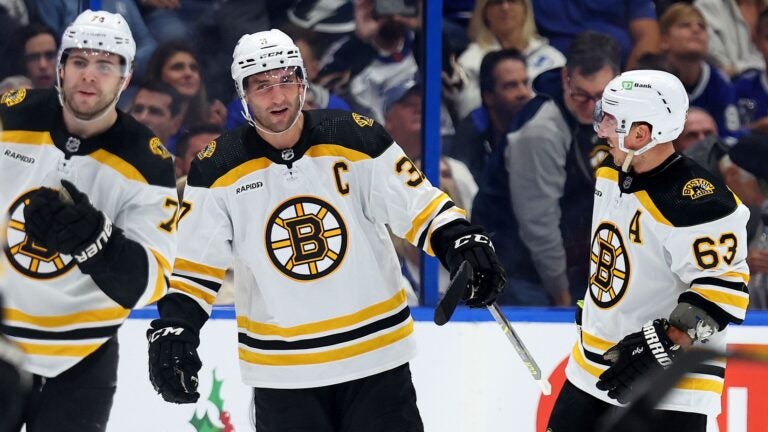 Patrice Bergeron's milestone, and other takeaways from Bruins-Lightning