At some point, the high-scoring Boston Bruins knew they’d have to grind out a painful two points. That development came to fruition during Thursday’s tilt with the rebuilding Anaheim Ducks.

The Bruins and Ducks hardly embarked on a proverbial track meet in this early season intraconference tilt. Neither team could establish extensive stretches of puck possession in their respective attacking ends of the ice.

In the rare times they did, Linus Ullmark and John Gibson were up to the task. And both teams capitalized on second-period turnovers, with Taylor Hall netting his first of the year on an errant Gibson pass and Frank Vatrano striking against his former team after Jack Studnicka’s errant poke check at Boston’s offensive blue-line led to a 2-on-1 in the other direction.

The mistakes continued into the third and overtime. Studnicka (again) and Lindholm took untimely penalties in the final stanza. Derek Grant continued the trend after tripping David Pastrnak late in the 3-on-3 extra session.

Ullmark and Gibson shined during OT. They each went 3-for-3 in the regulation portion of the shootout. But the Bruins got the last laugh as Hall beat Gibson five-hole and Ullmark denied Max Comtois in the fourth round of the glorified skills competition to secure the B’s ugly 2-1 victory.

“We found a way to get two points,” head coach Jim Montgomery said afterward. “It’s a hard league to win in, and we’re going to enjoy the two points. But, we’re not going to be happy with the team play.”

Here’s what we learned after the Bruins improved to 4-1 on the young season.

Hall shined in a bounce-back effort.

Hall entered the regular season a little behind schedule after sustaining an upper-body injury late in training camp. Because of that development, Hall spent the first week of the 2022-23 campaign in catchup mode.

Rust didn’t hinder Hall initially as he lit the lamp in Boston’s season-opening win over the Washington Capitals. The 2010 top overall pick didn’t produce a single point over the next three games and even found himself riding the bench in the third period of the B’s 7-5 loss to the Ottawa Senators on Tuesday night.

Clearly hoping for a bounce-back effort, Hall went from a season-low 11:55 time on ice in Ottawa to a season-best 18:00 against Anaheim. He looked like his usual self, creating scoring chances throughout the night for himself and his linemates.

“It wasn’t the preseason that I wanted, getting injured and not getting the game reps. Exhibition games are more about getting the legs under you and feeling like you can play with pace, especially for a player like me,” Hall said of his early-season performance(s). “I hadn’t played well the last couple of games, and it was personal for me — whether I got on the board or not — to find my game in the way I have to play all season long. Tonight was a decent step.”

Hall carried the offensive load on a night where the Bruins struggled to generate quality looks against a stingy Anaheim D.

At times Ullmark had to bail out the flat-footed Bruins. But Hall remained assertive with and without the puck, catching Montgomery’s eye in the process.

“I thought Taylor Hall was our best skater tonight, and Linus was our best player,” Montgomery said. “I bet you he had the puck on his stick for about 45 seconds tonight. And when an offensive player — a gifted offensive player — like Taylor Hall has the puck on his stick tonight, he feels better about himself. You saw the rest of his game [shine]. He made some good defensive plays; he made a hard hit. You know, he was really involved in the game.”

The Bruins didn’t have many steady hands, but they earned the two points behind Hall’s breakthrough outing and Ullmark’s stellar night.

Ullmark has the hot hand.

The Bruins hoped for steady production from Ullmark during his first season in Boston. After a rough initial transition, the former Sabre settled in and eventually found a groove after splitting most of last year’s starts with Jeremy Swayman.

Montgomery planned on keeping a healthy rotation intact during a busy opening slate. Through five games, the Bruins may have a little goaltending conundrum on their hand following Ullmark’s 30-save outing.

Perhaps the Bruins will ride Ullmark for a second straight start for their Saturday afternoon tilt with the Minnesota Wild. Yet, they may stay with the rotation with a shorter timeframe between games.

“It’s going to be hard to go away from. But the things we have to consider are the 36 hours [between games]. He spent a lot of time in the crouch because, unfortunately, we defended more than we would’ve liked.”

The Bruins didn’t click in their lowest-scoring outing of the year. But they received some needed timely saves from Ullmark, including a breakaway stop on Dylan Strome in the 3-on-3 overtime and on Max Comtois’ bid to extend the shootout in the fourth round.

“It’s been working so far, and hopefully I can keep doing that,” Ullmark said. “I don’t plan on letting in goals in the shootout, so it was fun tonight.”

Ullmark kept Bruins fans entertained during some dull moments. So too, did a returning defenseman.

Grzelcyk returned ahead of schedule.

The Bruins thought they’d enter an extended period without Grzelcyk, Charlie McAcvoy and Brad Marchand. The former of the trio, however, had other ideas.

Originally slated to return in November, Grzelcyk found himself ahead of schedule in his recovery from off-season shoulder surgery. He worked his way up during camp to eventually take contact in a full-team practice, making an early return closer to reality.

After another week and a half of taking full contact, Grzelcyk made his return. And he never felt rushed in the process, either.

“I didn’t want to rush anything, but I felt ready. I was in a good place mentally,” a sharped-dressed, top-hat-donning Grzelcyk said. “In sort of the last week, I felt I was ready to go. I felt right, so I’m just happy to be back.”

The Bruins were happy to have Grzelcyk back too. And it didn’t take long for the Charlestown native to make an impact.

Grzelcyk moved up to a top-paring role with Lindholm after starting the night alongside Jakub Zboril as Boston’s third defensive duo. The makeshift top pair of Grzelcyk and Lindholm each earned an assist on Hall’s second-period marker.

“It was fun to be back out there. I got a little anxious before the game, and I wasn’t sure how it was going to play out. I just kept reminding myself that I’m in a fortunate position and I’m lucky to be back,” Grzelcyk said after notching 20:02 of ice time in his first game of the season. “The guys have been playing great, and I just wanted to contribute as much as I could. It wasn’t our best effort, but we found a way to win.”

In his first action since Game 7 of the Carolina series, Grzelcy helped the Bruins win as they persevered through a rather tight-checking tilt.

Studnicka didn’t leave a good impression in his season debut.

Before the COVID shutdown, the Bruins had high hopes for Studnicka after rising up the prospect ranks following a solid junior hockey career. Even as his offensive production remained solid in Providence, Studnicka struggled to gain traction during his time with the big club.

The Bruins hoped Studnicka would make that jump to a full-time spot this year following a decent camp outing. He had his chance to make a good impression in his season debut on Thursday.

Studnicka became a liability in a third-line role, centering Trent Frederic and Charlie Coyle. He followed up a costly turnover in the second period with a pair of ill-timed penalties.

“I don’t think Jack had his best night,” Montgomery said, “but our team didn’t.”

Publicly, Montgomery wouldn’t commit to benching Studnicka or keeping him in the lineup for Saturday’s matinee with the Wild. But his one-word answer about keeping Studnicka in a rhythm over watching another game in the press box wasn’t necessarily a ringing endorsement. 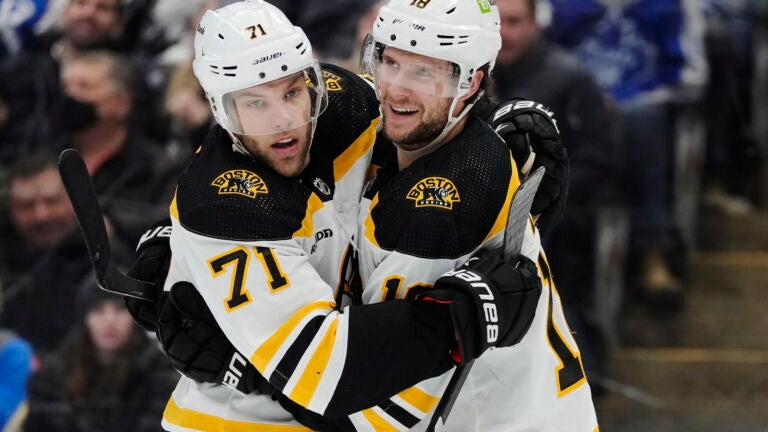