The historic start to the 2022-23 campaign continues.

The second half of a back-to-back without Brad Marchand (staying home following his stellar season debut on Thursday) and David Krejci (day-to-day, upper body) didn’t stop the Boston Bruins from continuing their winning ways Friday night in Columbus.

Jim Montgomery’s squad completed their October slate with an 8-1 mark following their 4-0 rout of the Blue Jackets.

Without Marchand and Krejci, the Bruins’ scoring depth continued to shine in Friday’s win.

Matt Grzelcyk kicked things off with his slick top-corner wrister to give the Bruins a 1-0 first-period lead.

Come the second period; a well-rested Blue Jackets bunch couldn’t withstand Boston’s relentless attack. A shorthanded back-handed tally from Charlie Coyle, a breakaway marker from Jake DeBrusk on the heels of blocking a Columbus shot attempt, and David Pastrnak securing his league-leading 16th point on a wrist shot gave the Bruins a comfortable cushion for Linus Ullmark to work with en route to his first shutout.

Here’s what we learned after the Bruins earned their best nine-game start to a season in franchise history.

“There were a lot of people who were counting us out at the start of the summer,” DeBrusk told NESN’s Sophia Jurkstovicz postgame. “There were some big names who weren’t in the mix. But yeah, it’s historic, especially for a team like Boston. It’s pretty cool to be a part of, and we want to continue that, obviously…”

Without Krejci and Marchand, the Bruins returned to a familiar spot to close out October. Of course, they went the entire month without their best two-way defensemen in Charlie McAvoy.

Amid the key injuries, the Bruins more than made up for those significant losses during the season’s opening month. They’ve received scoring contributions throughout their lineup. Only a handful of Bruins will head into November searching for their first tally.

On Friday, Grzelcyk, who missed the first week of the year following off-season shoulder surgery, became the 15th different Bruin to light the lamp.

The forward contributions began in the second after Coyle tallied his second goal in as many games. The Bruins entered the locker room with a four-goal cushion following DeBrusk’s third goal of the season — on his third breakaway attempt of the middle stanza — and Pastrnak’s seventh goal of the year.

Instead of caving, the Bruins persevered to their best start of their 98-year history.

“I attribute it to the talent on our roster and how hard those guys are playing for each other,” Montgomery remarked in his interview with Jack Edwards and Andy Brickley.

But even a deep team like the Bruins needs some top-tier talent to deliver tone-setting moments.

Ideally, the Bruins and Pastrnak would’ve agreed to a contract extension before opening night. Even as the negotiations extended into the regular season, both Pastrnak and GM Don Sweeney repeatedly expressed their desire to ink pen to paper.

Until then, Pastrnak will have to settle for upping his value for his impending big payday. And now he finds himself all alone atop the NHL’s scoring list with 16 points, one ahead of the dynamic Edmonton duo of Leon Draisaitl and Connor McDavid.

Given the early adversity facing the Bruins, Pastrnak has made an early case for Hart Trophy consideration. He’s finding various ways to produce with his patented one-timer on the power play, and his dazzling skating traits, and he’s also fighting his way through traffic for greasy goals in the early portion.

Pastrnak drew significant attention whenever the Bruins encountered an offensive slump over the past few seasons. With Krejci and Taylor Hall flanking him on the second line and more balanced scoring throughout their four forward trios, Pastrnak will only benefit from having more time and space at his disposal.

Ullmark caps off a stellar month with his first shutout

Even with the hot start, Boston’s D encountered a few hiccups adjusting to Montgomery’s defensive philosophy. As the back end gained their footing under their new coach, the Bruins relied on their goaltending tandem of Ullmark and Jeremy Swayman to back them up whenever the blue-liners found themselves behind in transition.

Aside from Boston’s lone loss of the year in Ottawa, Swayman and Ullmark both provided stability between the pipes. But Ullmark found himself carrying the bulk work after Montgomery pulled Swayman in the second period of that 7-5 setback against the Senators.

The Bruins’ blue line showcased strides since that lopsided loss to the Sens, allowing seven goals over their last five games.

Swayman bounced back with Thursday’s outing against the Red Wings. Ullmark picked up where he left off Friday night after notching his third shutout in a Bruins uniform.

The Bruins gave Ullmark a lead in the opening frame and never looked back. Ullmark provided more key stops late in the first to keep the one-goal lead intact, ultimately setting up Boston’s three-goal second period.

Even with the game well in hand during their second game of a back-to-back, Ullmark’s teammates returned the favor in the third, pouncing on the rare rebounds and blocking initial Columbus shot attempts to secure Boston’s first shutout.

“Everyone is playing the right way,” Coyle told reporters. “Third period of a back-to-back, it’s easy to let up. Linus played unbelievable and made some huge saves, but we kept coming. Guys are blocking shots in the end. It’s a 4-0 game and a back-to-back, and guys are still getting in front and doing the little things. That’s the sign of a good team, and that’s what we’re all about.” 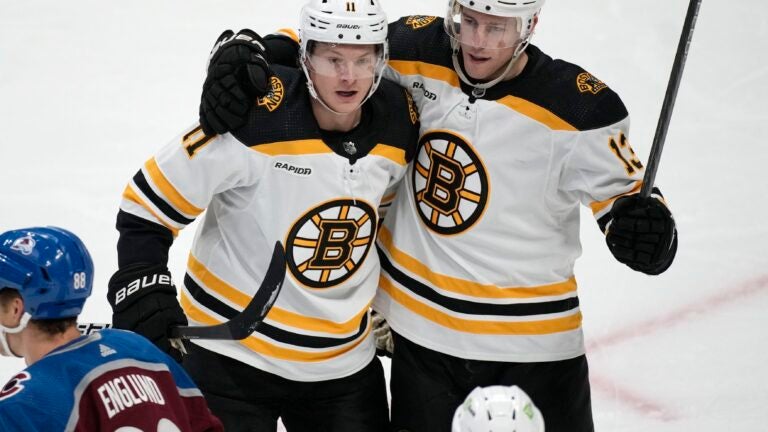 What we learned following the Bruins' rout of defending champion Colorado