The Boston Bruins entered November with significant momentum following their historic nine-game start to the 2022-23 campaign. The Pittsburgh Penguins came into the season’s second month hoping to bounce back following a rough four-game road trip to close out October.

The Bruins and Pens appeared primed to encounter that respective stinker and slump-buster during Tuesday’s early regular-season tilt.

The Bruins lost Derek Forbort to an upper-body injury in the first period. Jeremy Swayman also left the game in the third after favoring his left leg following his collision with Patrice Bergeron.

Montgomery tabbed Swayman for a relief appearance after Linus Ullmark allowed four second-period tallies within a 10:01 span. The Bruins appeared well on their way toward their second loss of the season following Rickard Rakell’s fifth goal of the season at 11:36 of the middle frame.

Once again, the Bruins never quit. They even found themselves on the wrong end of a goaltenders interference challenge, wiping away a Patrice Bergeron marker shortly after Rakell’s tally.

Shortly after the interference review on Bergeron, Brad Marchand cut Pittsburgh’s lead to 5-3 on a power play one-timer at 12:57 of the middle frame.

After relinquishing four straight goals earlier, the Bruins went on a 4-0 run of their own, beginning with Marchand’s third goal of the season.

Hampus Lindholm factored into every one of the four tallies. He assisted on three of them — including on Pavel Zacha’s third-period tip and a secondary helper on Taylor Hall’s equalizer — and capped off Boston’s thrilling 6-5 win with the coast-to-coast overtime winner.

“They believe in there. It’s incredible,” Montgomery told reporters after the Bruins improved to 9-1. “It was 5-3 in the third, and we’re generating chances, and I’m sitting here [thinking] I just love the fight in this team. There were nine minutes left. [I thought] it might not be our night…but Jesus, it was.”

Here’s what we learned as Boston’s historic early-season run continues.

With the Bruins down a defenseman, Montgomery and the coaching staff relied heavily on Lindholm to carry the brunt of the minutes. In Forbort’s absence, Lindholm showcased his durability in all three zones with nearly 30 minutes of time on ice.

In the process, Lindholm entered rare company after upping his point total to 11 through his first 10 games. Dating back to the 1982-83 campaign, Lindholm’s 11 points are the most among Boston blue-liners through the first 10 tilts since Bourque’s 12 in 1995-96.

Lindholm encountered a few road bumps with the occasional turnover. He even committed a borderline trip on Evgeni Malkin to give the Pens a 4-on-3 advantage in the extra session.

But Lindholm more than made up for that nearly costly penalty after a timely kill from Boston’s shorthanded unit. In the first shift following the kill, an assertive Lindholm hardly hesitated, skating from one end of the ice to the other to deliver the OT heroics.

Ullmark bounced back after Swayman’s injury.

The former Sabre didn’t have an ideal outing, to say the least. But the brunt of Ullmark’s first exit also lies with his supporting cast.

Ullmark relinquished his first goal of the night 30 seconds in after a blocked shot from Lindholm fell directly on Sidney Crosby’s stick. With the Pens captain alone in the slot and Jake DeBrusk arriving late on the backcheck, the Bruins found themselves in an early 1-0 deficit.

DeBrusk became one of several turnover culprits in the second period leading to Pittsburgh’s four-goal barrage. And Ullmark thought he’d watch the rest of Tuesday’s tilt from the bench after his D allowed a relatively easy entry on Rakell’s tally.

The Bruins needed Ullmark to come through in a tough spot as their comeback effort continued. The Swede delivered in the third period and overtime, stopping all 11 shots he faced in that stretch, including a trio of attempts on Pittsburgh’s 4-on-3 power play opportunity in the extra session.

Without Swayman, Nick Foligno provided the honors in the postgame hug with Ullmark. Indeed, it was well deserved on a night of comebacks.

“Hockey’s hockey,” Ullmark told reporters. “It’s a very humbling league. I don’t think I’ve ever seen this kind of situation develop the way it did develop. I thought Sway did a great job in there. In the end, we got a win.”

Montgomery didn’t provide an update on Swayman or Forbort. According to The Boston Globe’s Matt Porter, Swayman was walking around with ice packs on his left knee and wasn’t in crutches.

After a rough start to his professional hockey career, Lauko earned his stripes with the club following a solid preseason. He found himself on the opening night roster, yet at times found himself as the odd man out amid a rotating door on Boston’s bottom six.

His healthy scratches weren’t necessarily attributed to poor performances. Instead, Lauko’s stints in the press box were more indicative of becoming the odd man out following Marchand’s return.

With David Krejci and Craig Smith out Tuesday, Lauko returned to fourth-line duty with Foligno and Tomas Nosek.

Lauko saw his ice time diminish a tad as Montgomery utilized his top three lines during the final frame. But the Czech winger didn’t disappoint in his 9:02 of ice time, notching his first career goal on a Foligno feed to give the Bruins their first lead of the night in the opening stanza.

An emotional Lauko spoke to reporters afterward, discussing his plans with the puck from his first NHL tally. As a promise to his late friend Ondrej Buchtela, Lauko said he’ll give the puck honoring his achievement to Buchtela’s mother.

“I made a promise to my dying friend two years ago I would make it to the NHL,” Lauko said according to Boston Hockey Now’s Joe Haggerty. “It’s going to his mother.” 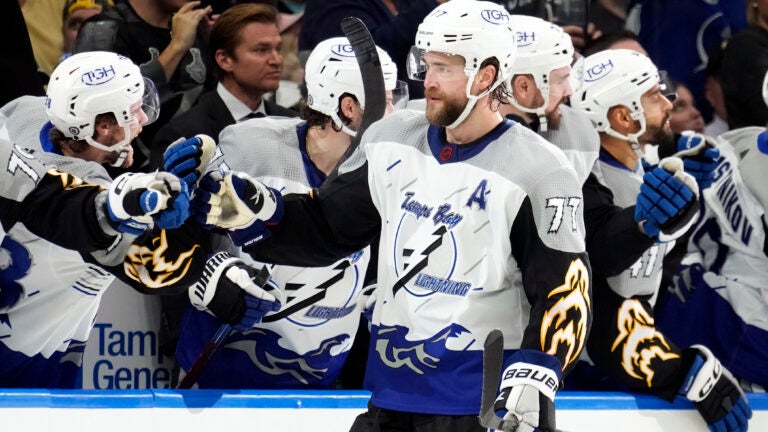