The red-hot Boston Bruins are near the halfway point of their torrid seven-game stretch. And so far they’ve fared pretty well against stiffer competition.

Jim Montgomery’s squad started their recent run with a convincing win over the Tampa Bay Lightning on a night where Patrice Bergeron tallied his 1,000th career NHL point. They ended Thanksgiving week with a thrilling come-from-behind overtime victory over the Carolina Hurricanes in a record-breaking 12th straight home win to start their 2022-23 campaign.

The Bruins overcame some hurdles after allowing the first goal in each of their last three tilts. They aren’t catching any teams by surprise anymore, but they continue to pass the plethora of tests in front of them.

That trend will continue over the next four games, beginning Tuesday in their second matchup of the season with the high-octane Lightning. But the Bruins will also receive a breather with a few days off before they welcome the defending Stanley Cup champion Colorado Avalanche to TD Garden on Saturday.

“As much as it is a measuring stick, I think just for us — where our game is at — as the year has gone on we’ve been on a little bit of a roll. Now we have some breaks in between games too,” veteran forward Nick Foligno said. “I’m proud of the guys with the way we’ve handled things. There are good teams [on the schedule], and we’re going to get every team’s best [effort]. It doesn’t matter how we’ve played before. We should expect to get every team’s best just from the type of team we are.”

Even with disappointing postseason exits, the battle-tested Bruins remain one of the league’s upper-echelon squads. They’ve proven the doubters wrong in the early going after many pundits pegged them as a fringe playoff team.

No matter the record, the Bruins remained a difficult out. Foligno witnessed that firsthand during his time in Columbus and Ottawa. Now he’s on the other side of the spectrum, contributing to Boston’s cause amid his bounce-back season.

“I remember playing against this team and you had to be at your best with the way this team has carried itself. So, I take pride in that, and I think guys should understand that it shouldn’t matter how we prepare to play against anyone, we should always expect to get the other team’s best,” Foligno added. “I think that’s a nice feeling. It’s something that this team has worked for long before we got here, and we want to continue that.”

The Bruins started their season without Charlie McAvoy, Matt Grzelcyk and Brad Marchand. Yet, they didn’t miss a beat as the trio recovered from their respective offseason surgeries.

The next-man-up trend continued even after McAvoy, Marchand and Grzelcyk returned. Brandon Carlo, Jeremy Swayman and Derek Forbort are among the Boston notables who have missed time to injury.

And players still sense areas of improvement on the penalty kill, their 5v5 offense, and limiting the quantity of trips to the box. The shorthanded unit should receive a boost with Forbort (broken finger) potentially returning on Tuesday.

No matter who they trot out, the Bruins continue to live in the moment. They’ve spat in the face of adversity through injuries and in-game deficits. Their perseverance will only benefit them further entering the latter half of this tough seven-game slate.

“I think they get really focused and excited for the games, and I think you saw that against Carolina. I never thought our team stopped working in that game” Montgomery said. “And you’re going to see that again with Tampa Bay, Colorado and Vegas coming up.” 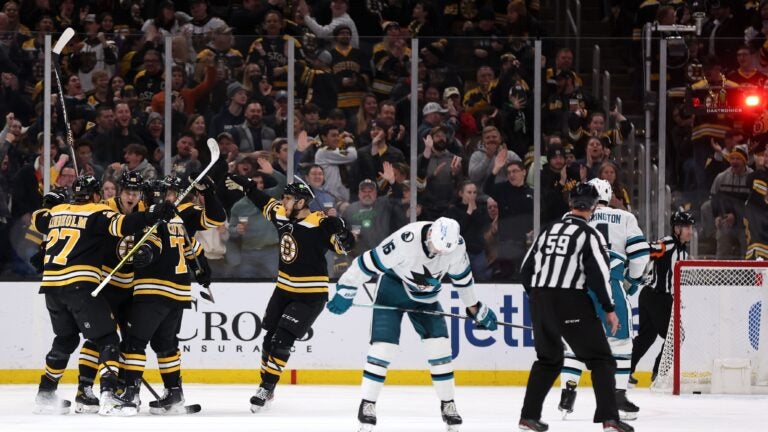 Chad Finn: Bruins fans should be all in on the team's potentially historic season