DENVER (AP) — Taylor Hall scored twice and had an assist, Linus Ullmark stopped 23 shots for his second shutout of the season and the Boston Bruins cruised to a 4-0 win over the banged-up Colorado Avalanche on Wednesday night.

The Bruins found a big spark soon after Pastrnak was knocked to the ice on a hard hit from Dryden Hunt early in the second period. Tomas Nosek came to the defense of Pastrnak and got into a fight with Hunt. Both were sent to the penalty box.

Pastrnak exacted a measure of revenge just over two minutes later by scoring his 18th goal of the season. It was set up by a David Krejci pass from behind the net.

Hall soon made it 2-0 thanks to Charlie Coyle, who stole the puck and fed it to Hall.

In the third period, Frederic scored on a pass from Hall, and 3:18 later Hall added another.

Alexandar Georgiev stopped 33 shots for an Avalanche team that has lost three straight.

Colorado is trying to weather a glut of injuries that’s led it to dig deep into its minor-league system. The team called up Cal Burke, Ben Meyers, Sampo Ranta and Andreas Englund from the Colorado Eagles of the AHL on Wednesday. The foursome were all in the depleted lineup. The team has now used 34 players this season, which is among the most in the league.

The latest player to be sidelined was Colorado’s leading scorer, Nathan MacKinnon. He’s out for about a month after suffering an upper-body injury during Monday’s loss in Philadelphia.

Forwards Darren Helm and Artturi Lehkonen skated with the team Wednesday and could be close to a return.

Burke made his NHL debut against the team he grew up rooting for as a kid. Burke, who’s from Massachusetts, was a big fan of Patrice Bergeron.

“It’s kind of surreal, with a lot of family back home being able to watch,” said Burke, whose audience at Ball Arena included his wife and parents. “It’s cool.”

Boston: At Arizona on Friday night. 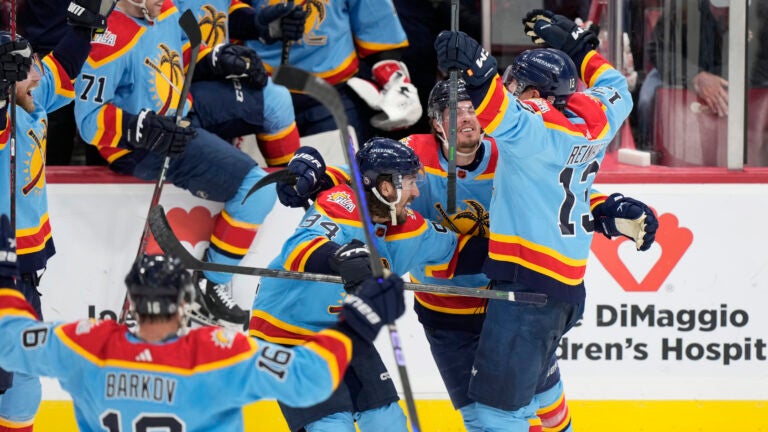