Reinforcements might be on the way for a still-surging Bruins roster.

Jim Montgomery revealed Sunday night that Jake DeBrusk — out since early January with a reported broken fibula — was expected to hit the ice on Monday.

Even though Boston’s bench boss doesn’t believe DeBrusk will join the team to start this five-game road trip, the winger is right on schedule with his recovery timeline.

I think he starts skating [Monday],” Montgomery said. “He has to check boxes to come back, so we don’t have a timeline right now. We’d like him to be back before the All-Star break, but we’re not gonna push that with that break coming.”

DeBrusk suffered a leg injury during the 2023 Winter Classic at Fenway Park. He was felled by a Matt Grzelcyk shot that clanged off of his leg, just seconds before scoring his first of two goals against the Penguins.

DeBrusk was placed on long-term injured reserve days later due to both lower-body and hand injuries. His expected time on the shelf was four weeks, setting him up for a pair of heavyweight road matchups against the Hurricanes (Jan. 29) and Maple Leafs (Feb. 1).

The Bruins also don’t need to rush DeBrusk’s return, especially with the team off for nine days during the All-Star break. Since losing DeBrusk, the Bruins are 8-1-0, trailing for just 25:33 during this current five-game winning streak.

Still, DeBrusk’s return will give an already potent Bruins offense another shot in the arm. The top-six forward was playing the best hockey of his career at the time of his injury, scoring eight goals and 13 points over his last 13 games.

Following the Winter Classic, DeBrusk ranked second on the team in goals (16) and third in total points (30).

Until DeBrusk returns, expect Boston to stick with a top line of Patrice Bergeron, Brad Marchand, and Craig Smith. It’s been a challenging season for Smith, but the veteran’s forechecking and shot-first mentality have suited him well in his current role.

In the Marchand-Bergeron-Smith line’s 48:48 of 5v5 ice time this season, the Bruins have outscored opponents, 3-0.

With Tomas Nosek out four weeks with a fractured foot, the Bruins are loading up on depth in their bottom-six corps.

And with a spot open on the roster, the Bruins called up North Billerica native Marc McLaughlin from Providence ahead of their extended road trip.

McLaughlin has played all season down with the P-Bruins, scoring seven goals and 17 points over 39 games. After a slow start in the AHL ranks (three points in 14 games), the former Boston College captain has turned a corner as of late (nine points in his last nine games).

Armed with a heavy shot and a solid two-way game, McLaughlin was a surprise cut during the final days of training camp.

“There’s a lot that goes into it,” Montgomery said of McLaughlin’s game in October. “He had a great camp. We’re really happy with his development. There are certain areas of his game that we really want him to focus on down in Providence, details and physicality and stuff.

“His offensive production, his tenacity on pucks, his ability to score, all that has shown through. He’s going to be a big part of our future. We do also have great depth. So, right now, it’s what we think is best for the Boston Bruins moving forward.”

McLaughlin will give Boston some options further down the depth chart. Joona Koppanen impressed in place of Nosek during Boston’s 4-0 win over San Jose Sunday, but McLaughlin can compete for reps on the wing with A.J. Greer.

Last season, McLaughlin played 11 games with the Bruins. He scored three goals over that stretch, including a memorable tally in front of his family during his pro debut. 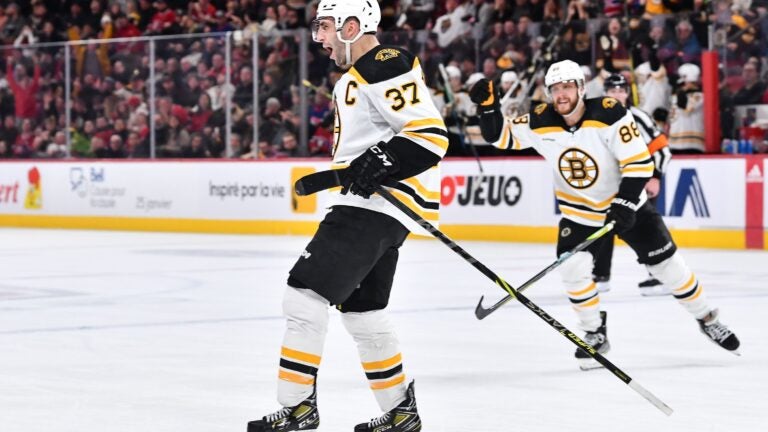 3 takeaways from another 'classic' Bruins-Canadiens matchup