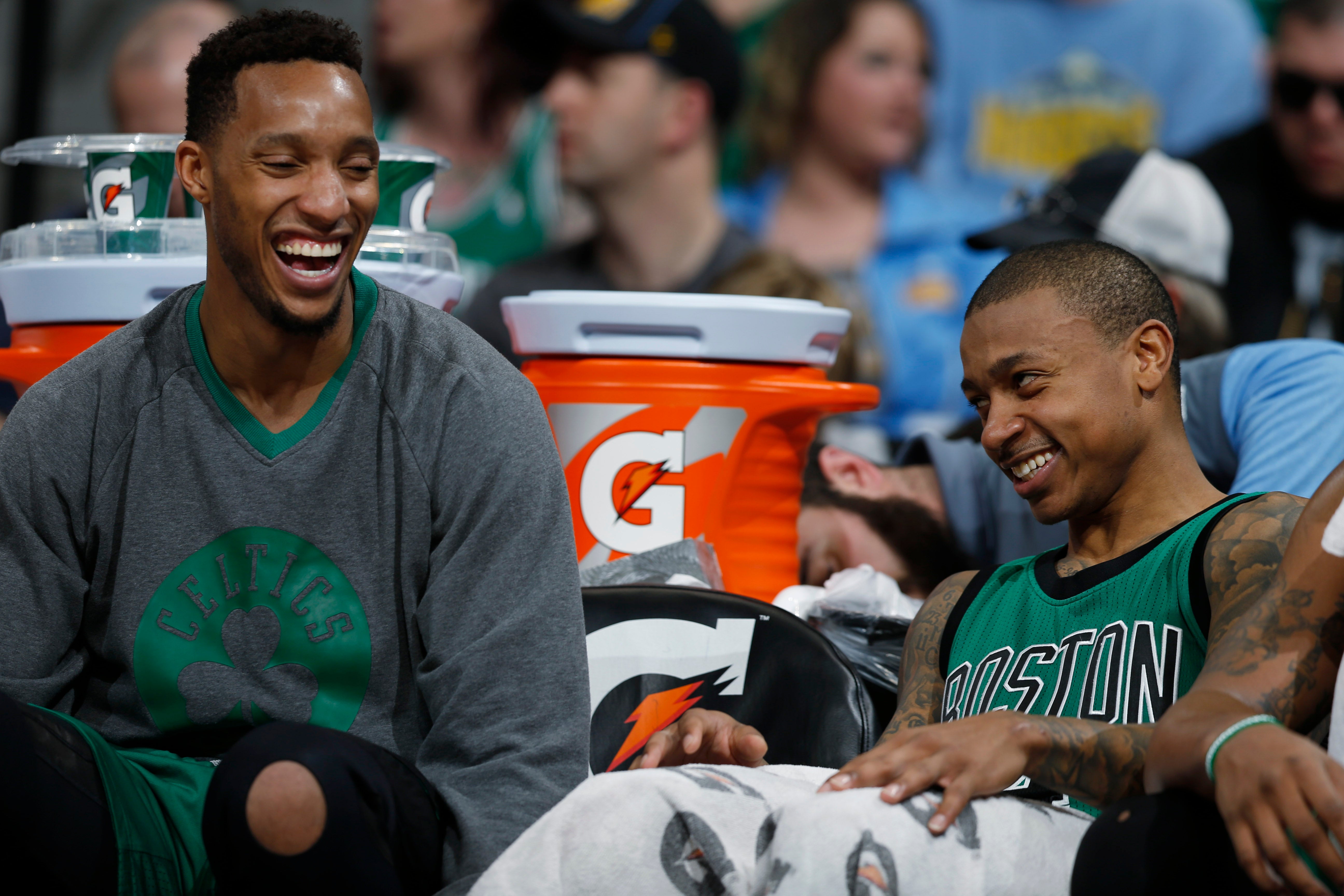 Celtics guards Evan Turner, left, and Isaiah Thomas share a laugh with each other as time runs out in the second half of a game against the Nuggets.

1. Maybe I’m paying too much attention to the voice to the caterwauling minority, but there does seem to be a significant cross-section of Boston sports fans (and media) who pay only cursory attention to the Celtics yet opine on them as if they’ve seen more of the franchise’s history than Tommy Heinsohn.

In the 31 months since that seismic swap, Celtics director of basketball operations Danny Ainge has hired Brad Stevens; acquired Isaiah Thomas for essentially Marcus Thornton, Tayshaun Prince and a protected first-round pick; stolen the unheralded Jae Crowder from the Mavericks; drafted defensive tone-setter Marcus Smart; collected helpful misfits like Evan Turner; and remodeled this franchise into one of the most interesting and fulfilling-to-root-for teams in the league.

And yet after the trade deadline, I still got stuff like this:

2. It’s exasperating and bewildering at once. Of course, the goal is an 18th banner. As you probably have ascertained, that’s why I always list 18 items in this periodic column. But rebuilding a team is an extraordinarily complicated process in the NBA, probably moreso than in any other sport. I don’t know how anyone in possession of common sense can really take issue with Ainge’s work since the trade with the Nets. The Celtics haven’t signed a major free agent or hit it big in the lottery or acquired a fat-salaried star in a trade, steps that are usually necessary in a rebuild. And yet here they are, even after Monday night’’s debacle in Minnesota, with 10 wins in their last 14 games, a winning percentage of .569, and a deep, versatile, united roster. These are fun times: They have a real shot at making the Eastern Conference Finals and agitating LeBron more than any courtside scold ever could. Better, there is the promise of even headier times ahead. Don’t take your cues from sports radio yowlers who barely watch this team. Watch them yourself, every chance you get. You’ll enjoy it, and soon enough, you’ll appreciate how far Ainge has brought them already.

3. A question for those who do log at least starter’s minutes watching the Celtics every time they’re on television: Were there any players rumored to be available at the deadline for which you would have given up this year’s Brooklyn pick? You’d have to do it for Blake Griffin, right? Occasional forays into punching out members of the support staff notwithstanding, he’s an elite talent who plays hard and would give the Celtics something they lack — genuine athleticism on the front line. Boogie Cousins — who is averaging 28.3 points per game and 11.9 rebounds at age 25 — is also a no-brainer for me, even with the risk that his tempestuous personality would alter the culture of the Celtics. Jahlil Okafor? I could be talked into it, just as long as you guys promise to be nice to him outside the bars. Dwight Howard? C’mon, it’s not 2006. I’d reluctantly give up the Dallas pick, but nothing more substantial than that.

4. I suppose there might have been a slim chance of the Cavaliers trading Kevin Love at the deadline. Perhaps acquiring Ryan Anderson from the Pelicans, a rumored deal that didn’t come to fruition, might have been the domino that needed to fall first. But there was zero chance they would have traded him to the Celtics, a possible opponent and probable nuisance in the Eastern Conference playoffs. Theoretically, though, I would have been reluctantly cool with Ainge parting with this year’s Brooklyn pick in a deal for Love.

5. Love remains underutilized by Coach LeBron and his trusty assistant, Ty Lue, in Cleveland. One of Stevens’s best attributes as a coach is his ability to put his players in positions to succeed. Even players who have been misfits elsewhere, such as Evan Turner, are valuable here because their coach plays to their strengths. Love has many strengths — in the Celtics’ offense, he’d be a beast operating out of the the high-post just as he was in Minnesota — and you know Stevens would get the most out of his vast talents.

6. There was a far better chance of Anthony Davis shaving off his eyebrow just for the hell of it than there was of the Pelicans trading him to the Celtics (or anywhere else, presuming the Warriors didn’t offer their entire backcourt for him) at the trade deadline. And if you thought there was something to that rumor, or put any stock in conjecture that he might have been the mystery player Ainge mentioned pursuing, congratulations, because you’re complicit in this media world in which utter nonsense gets attention and thus becomes self-perpetuating.

7. Despite his shooting issues, LSU’s Ben Simmons remains the obvious No. 1 pick in this year’s draft, with Duke’s rapidly improving Brandon Ingram and Croatian 7-footer Dragan Bender standing by as intriguing consolation prizes. Amid all the anticipation of the talent the Celtics might end up with this year, I believe the appeal of the future Brooklyn picks coming this way in the future — the Celtics can swap first-rounders next year and own the Nets’ No. 1 in 2018 — has been overlooked. New Nets general manager Sean Marks has the Spurs pedigree, but repairing his new mess is no easy, short-term task. I don’t see how they get better over the next couple of seasons, and they may well get worse.

8. I would have loved to have been in the room that December 2014 day when Mavericks owner Mark Cuban informed coach Rick Carlisle that the trade for Rajon Rondo had been completed. I have the utmost respect for Carlisle — even if he did abandon the mighty University of Maine to go play with Ralph Sampson at Virginia — and I cannot believe for a second that he wanted that deal to happen. He had to have known — even if he could not convince Cuban of this truth — that fitting the ball-pounding Rondo into his free-flowing offense was the ultimate square peg/round hole disaster waiting to happen.

9. But the lingering question related to that trade is whether Carlisle knew what he had in Jae Crowder. Even with Rondo’s relative rejuvenation with the Kings, there’s no disputing at this point that the Celtics got the best player in the trade. It was probably the player who drew the least notice at the time: Crowder was averaging just 10.6 minutes per game and 3.6 points through the Mavs’ first 25 games of the 2014-15 season, his third in the league.

10. The Mavs had a dozen players average more minutes played than Crowder that season, including Al-Farouq Aminu and the ghosts of Richard Jefferson and Jameer Nelson. For context, Gigi Datome and James Young averaged 10.7 mpg for the Celtics last season.

11. I suppose the conclusion is that Carlisle might have liked Crowder without having any idea he would become a tone-setting defender and a capable if hardly smooth 3-point shooter. Since arriving in Boston, Crowder has made such an impression on his new fan-base that some among us would have been reluctant to give him up in a deal for Love.

12. Adam Himmelsbach in The Boston Globe wrote a thoughtful and thorough examination on why it didn’t work out for David Lee in Boston. Himmelsbach cited Lee’s high point as the October trip to Madrid and Milan, when the veteran forward totaled 26 points, 18 rebounds and 7 assists in 42 minutes over two games. The performances were nothing but encouraging, especially since he’d helped the Warriors win the NBA title just a couple of months before. In retrospect, it’s kind of sad that his best performances came in the preseason against non-NBA competition.

13. But I do remember one highlight from his brief time here, and it happened to come against the best basketball team in the world. Facing his former Warriors mates at the Garden on Dec. 11 — a double OT thriller in which Golden State improved to 24-0 — Lee scored 10 points in 16 minutes. That included a run of six straight points during a 68-second stretch early in the fourth quarter, with Lee’s last bucket giving the Celtics an 84-83 lead. I wish it had worked out better for him here. Lee can’t guard anyone anymore and struggles to finish at the rim, something he once did so well. But at least for one memorable night with the Celtics — or a few moments during a memorable night — he was a perfect fit.

14. Unless Ainge’s intention is to turn the Red Claws into a D-League dynasty, the Celtics won’t use all eight (eight!) of their picks in the 2016 NBA Draft. But it is fun to speculate on the hypotheticals regarding the players they might take in the various spots. NBADraft.net — yep, that’s still a go-to here — currenty predicts the Celtics will select Croatian forward Dragan Bender (No. 3 overall), Marquette center Henry Ellenson (No. 19, which will never happen — he’s a top-10 pick), Vanderbilt center Damian Jones (No. 23), Oregon State guard Gary Payton II (No. 31), Purdue center AJ Hammons (No. 35), Wichita State guard Ron Baker (No. 49), Iowa forward Jared Uthoff (No. 51), and Kentucky forward Alex Poythress (No. 57). Man, that’s too many players even for the Red Claws.

15. I had completely forgotten, by the way, that Ainge was fined $30,000 by the NBA for “excessive contact’’ with Durant’s family before the 2007 draft. His transgression? He sat next to Durant’s mom during the Big 12 Tournament. That fine seems like a fair punishment. Had Roger Goodell been the NBA’s commissioner, he would have stripped the Celtics of three years’ worth of first-round picks.

16. I want the Celtics to sign Al Horford in free agency. He’s a perfect fit here, and the max contract is no bother. Now excuse me while I try to figure out a way for Ainge to pull off a Horford-Durant package deal.

17. Isaiah Thomas was 24th and Crowder 28th in ESPN’s recent NBA Trade Value column. That’s kind of amazing given what Ainge gave up to acquire them. Of course, the column itself would have been far more interesting had it been written by the format’s originator. It felt like something was missing besides Bill Simmons’s byline.

18. I’m not sure what’s the most amazing: That the Kings drafted Thomas 50 picks after they chose Jimmer Fredette with the 10th overall selection in the 2011 NBA Draft … or that Fredette, who just signed a 10-day contract with the Knicks, went a pick before Golden State took Klay Thompson … or that the hapless Kings turned their good fortune with Thomas into a July 2014 sign-and-trade deal with the Suns that left them with the rights to Alex Oriakhi and a trade exception? Thomas has been in the league five years, and he’s already been a bargain for three teams. 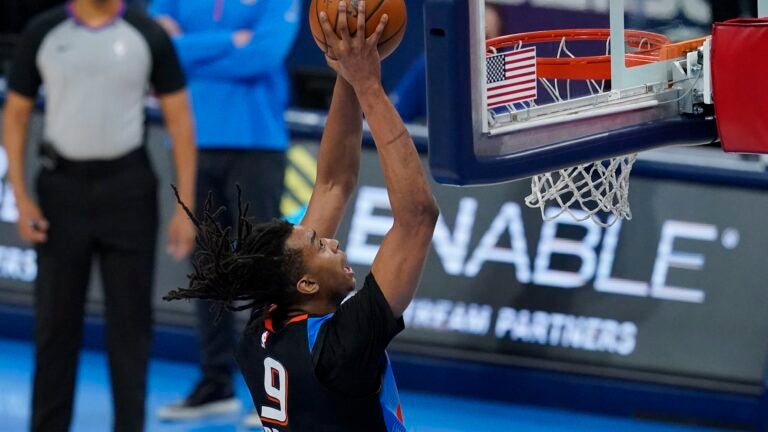