The Celtics have been doing a lot of things right this season. They spread the scoring around, and they have become one of the best teams in the game in the process. Chad Finn wrote last week about his excitement for the team come playoff time, and I generally share that excitement. However, I think it is also instructive to take a look at what the Celtics don’t do well. There are three main areas.

The Celtics score plenty, but that’s not because they shoot the ball well. It’s because they take a ton of shots – they lead the NBA in field goals attempted by a wide margin (186 shots). The gap between them and the second-place Portland Trailblazers is nearly as large as the gap between the Blazers and the 15th-place Dallas Mavericks.

Looking at field goal percentage, the Celtics are middle of the pack on two-point attempts, but near the bottom when it comes to three point shots – they only make 33.3 percent of their shots from downtown, which leaves them in 27th place out of 30 NBA teams. This is an issue, because they’ve taken the eighth-most three pointers.

We can see just how much of an issue when we consider effective field goal percentage, or eFG%, which is a key advanced metric that is more telling than normal field goal percentage because it adjusts for the fact that a three-pointer is more valuable than a two-pointer. Think of it as shooting efficiency. By eFG%, this year’s Celtics are tied for 25th, and of the five teams with a worse eFG%, only the Memphis Grizzlies would be in the playoffs if the season ended today (and they have been beset by injuries).

A .501 eFG% is considered league average, and the C’s have several players well below that threshold. Most notable is Marcus Smart, whose .419 eFG% is one of the worst marks in the game. Via the Sports- Reference Play Index, of the 294 players who have taken at least 200 shots this season, Smart’s eFG% ranks 289th. Smart had improved in January and February versus November and December, but he’s dipped into dangerously bad territory again in March.

It’s not just Smart. Evan Turner (ranked 248th) and Jared Sullinger (245th) are both well below average for the season, and David Lee was as well before he was let go. Sullinger has been much better lately though, and like Smart, Turner was better in January and February before tailing off a little this month. It’s no surprise that this trio grades out the worst in eFG%, since they are among the worst three-point shooters on the team. Smart is the biggest concern – he’s taken the fourth-most three pointers on the team.

To make matters worse, the team also doesn’t get to the line enough. While the team is a seemingly respectable 17th in overall free throw attempts, that number could be a lot higher. FTr, or ree throw attempt rate, is an advanced metric that tracks the number of free throw attempts per field goal attempt. The Celtics rank just 24th in FTr. Their raw total of free throw attempts is again masked by how often they have the ball. This also more or less confirms what the frequent watcher may feel – that Boston isn’t getting the respect from the referees that it deserves.

At The Rim Defense

Overall, the Celtics have a very good defense. The team’s defensive efficiency – ie, the number of points the team allows per 100 possessions – is fourth-best in the NBA. However, when we look at their field goal percentage allowed by area of the floor, we see there is one area in which they don’t shine: 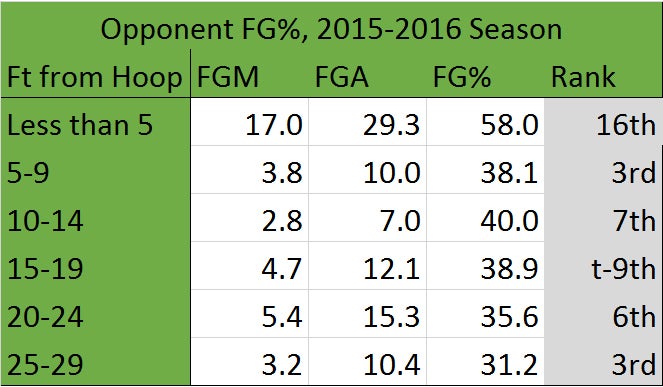 As you can see, the Celtics are in the top 10 in opponent’s field goal percentage in every area of the floor except for within five feet of the basket. And that is easily the place where opponents shoot the most. Part of the reason is that the team just doesn’t have enough shot blockers – the C’s rank just 24th in total shots blocked this season. And the numbers here are only part of the story. The C’s have also allowed the most free throws this season, and it’s likely a lot of those come on fouls within five feet of the hoop.

If there is a silver lining here it’s that most of the other good teams in the Eastern Conference haven’t seemed to notice. While the Hawks rank eighth in the game in field goals attempted within five feet, the Cavaliers are 23rd, the Raptors are 15th, the Heat are 16th, and the Hornets are 27th. However, it should be noted that many of those same teams are excellent when they do shoot there – the Heat are third in less than five ft field goal percentage, the Cavs are fourth, and the Hawks are 12th. In a playoff series, these teams could really hammer the C’s at the rim.

Related to their issue with protecting the rim from shooters is the fact that the C’s also have a hard time cleaning the defensive glass. The team’s overall rebounding doesn’t look that bad because of their proficiency on the offensive glass, but defensively, they really lag. The team grabs just 74.3 percent of available defensive rebounds, which ranks a lowly 26th in the game. The culprits are clear – Isaiah Thomas and Avery Bradley. While the team depends on them for so much offense, they don’t hit the defensive glass. Of the 146 guards who have played at least 40 games this season, Bradley’s defensive rebounding percentage (DREB%) ranks just 140th. Thomas ranks 129th. Even among their own position group, they are at the bottom of the pack.

It’s not just them. Aside from Jared Sullinger, no one stands out for the C’s on the defensive glass. Among the 316 players who have played at least 40 games, Sullinger’s 28% DREB% ranks 11th, but the next Celtics player on the list is Jonas Jerebko, at 86th. That’s a big drop. And obviously Sullinger isn’t on the floor at all times. In fact, he is just sixth on the team in minutes played per game. The team improves in the clutch, but in a playoff series, they may not have the luxury of waiting until the end of the game to start pounding the glass.

The Celtics have become a very good team, and it hasn’t been an accident. Coach Brad Stevens puts them in a great position to win every ballgame because he is able to shift around his personnel in a manner that plays up their strengths and minimizes their weaknesses. But the team does have notable weaknesses, and come playoff time, teams are going to be trying harder than ever to exploit them.

7 takeaways as Celtics annihilate Suns in showdown between contenders