In a single draft, Celtics coach Red Auerbach acquired three future Hall of Famers and created one of the most bizarre NBA legends of all time. Out of the 1956 NBA draft sprung not merely an almost unbelievable story involving Bill Russell and the Ice Capades, but a Boston basketball dynasty that is still unmatched in its dominance.

And as the Celtics approach a pivotal draft in 2016, the story of 1956 is as relevant as ever. It was a seminal moment, straddling two eras. Prior to it, Auerbach and Boston had known nothing but playoff disappointment. Following the ’56 draft, the Celtics would appear in 10 straight NBA Finals.

Selecting Tommy Heinsohn, Bill Russell and K.C. Jones in one fell swoop, Auerbach changed the course of both Celtics and NBA history. In reality, it wasn’t nearly as orderly as that sounds. The process by which Boston added three pillars of its future dynasty was circuitous, illustrating how different a time it was for the NBA, as well as Auerbach’s enduring resourcefulness.

While Bill Russell is remembered as the marquee pick in the 1956 draft, he wasn’t technically the Celtics’ first selection that year. Tommy Heinsohn, the prolific forward from Holy Cross, was claimed by Boston under a now defunct draft option: the territorial pick.

As part of an effort to generate interest in the professional league, the NBA instituted a special rule giving teams exclusive rights to claim locally based college players.  These “territorial picks” would be naturally popular, since it would give the regional fan base an immediately recognizable star. (The rule was in place from 1949-1965, and was deployed with extraordinary success given that 11 of the 23 territorial picks ended up in the Hall of Fame).

Heinsohn was therefore nominally the first overall selection, having been claimed before any rookie.

As part of the territorial pick rule, Boston forfeited its first round choice. The road to drafting Russell appeared to be blocked.

The ‘quite remote’ chance of getting Russell

“If I had the chance to, I’d grab Russell,” Red Auerbach told the Boston Globe’s Clif Keane in January, 1956. “He’ll no doubt be the No. 1 selection.”

Even months before the draft, Auerbach had publicly identified who he valued most in the upcoming draft. Still, that had been a hypothetical statement, since (even before forfeiting the team’s first round choice on a territorial pick) Boston was far from being the near the top of the draft. A playoff team in the previous season, the Celtics were farther down in the draft order.

“The possibility of the local club getting the San Franciscan (where Russell went to college) is quite remote,” Keane had said on January 10.

Yet Auerbach was already no stranger to controversial draft decisions. In 1950, the first year Celtics coach skipped over local hero Bob Cousy and, in the second round, selected the first African American player in NBA draft history, Chuck Cooper. Cousy eventually ended up in Boston anyway, but Auerbach’s headstrong nature hadn’t changed.

Having surveyed the annual shortcomings in his team, Auerbach decided that the time was right for a gamble. And it arrived in the form of a bold trade only days before the draft. The Celtics sent Ed Macauley and the player rights of Cliff Hagan to the St. Louis Hawks in exchange for the second overall pick in the draft.

Of course, there was still the very distinct possibility that the Rochester Royals would take Russell with the first overall selection. And this is where the story leaves the confines of established fact and enters the realm of Celtics legend.

It wasn’t until years later that Russell’s name became connected with the Ice Capades, providing a long overdue explanation for one of the NBA’s greatest draft mysteries: why the Rochester Royals chose to skip over the consensus college player of the year.

As the story goes, Auerbach got Celtics owner Walter Brown to guarantee Rochester owner Les Harrison a lucrative series of shows performed by the Ice Capade dancers (whom Brown was a part owner of). In exchange for bringing him a cash windfall via the Ice Capades, Harrison and Rochester wouldn’t take Russell with the first pick. Heinsohn relayed the story in a recent interview:

It’s a story that has garnered a predictable amount of space in Celtics lore. Of course, it was never proven to be exactly true. Auerbach was the only major party to convey details. As subsequent investigations have noted, neither Brown nor Harrison ever confirmed anything of the sort.

In reality, the reasons for Rochester’s infamous decision to pass on the Hall of Fame center were more varied, and (if it’s even possible), more interesting to modern NBA fans. As a United Press Association story from draft day in 1956 noted:

It was said three factors caused Rochester to name Green over Russell; 1. Russell’s absence until late December as a member of the U.S. Olympic team; 2. The fact that the Harlem Globetrotters should bid high for his services; 3. Doubt among some pro coaches that Russell will star in the pro game as he did in college.

(Note: the 1956 Summer Olympics were held in Melbourne, Australia. It was the first time that the Summer Games were held in the southern hemisphere, and meant that every event except equestrian competitions were held in November and December).

Yes, the Globetrotters were seen as a legitimate threat to sign a top college prospect over every NBA team. This is mind-boggling to fans in 2016, but it was a reality in the vastly different basketball era of the fifties. Wilt Chamberlain, after all, played a season with the Globetrotters on what was seen at the time as one of the most lucrative contracts in basketball history.

Jerry Nason, a Globe columnist, posited in March, 1956 that “fabulous Bill Russell, USF’s dunk-shot specialist, is a natural clown who’d turn Globetrotter after the Olympics, rather than NBA, if the price were right.”

Whatever Rochester’s reasoning, Russell dropped to the Celtics, meaning that Boston scooped up both Heinsohn and Russell in a staggering coup. And in the second round, Auerbach picked Russell’s former San Francisco teammate, K.C. Jones. All three would go on to become not only Hall of Fame players in their own right, but members of the greatest dynasty in basketball history. Still, that was only after Boston actually managed to sign Russell, which was seen as a risk at the time.

Despite the delayed start to his rookie year due to the Olympics (where Russell won gold with Team USA) and the supposed bidding war against the Globetrotters, Russell quickly agreed to a contract with Boston after returning from Melbourne in December, 1956.

Russell’s biographer, Murry R. Nelson, dispelled the notion that he was offered a record amount of money by the Globetrotters:

Newspaper rumors had (Harlem owner) Abe Saperstein offering Bill $50,000 to play with the Globetrotters, an enormous sum at that time. The reality was that it was $15,000 and, after some negotiating, became $17,000, but Bill had already figured that even the $50,000 wasn’t enough, because the Trotters played nearly every night as opposed to the more ‘relaxed’ conditions of the NBA and its two or three nights per week.

Having been willing to take enormous risks, both in trading away proven talent and waiting months to sign the man he’d traded so much for, Auerbach’s gambling paid off. Russell made his Celtics debut against (of all teams) the St. Louis Hawks on December 22, 1956. And nearly four months later, it was Russell and Heinsohn who led the way for Boston in game seven of the NBA finals, which Boston won to give Auerbach the first of the franchise’s 17 championships.

The Celtics’ opponent that year was, fittingly, the Hawks. 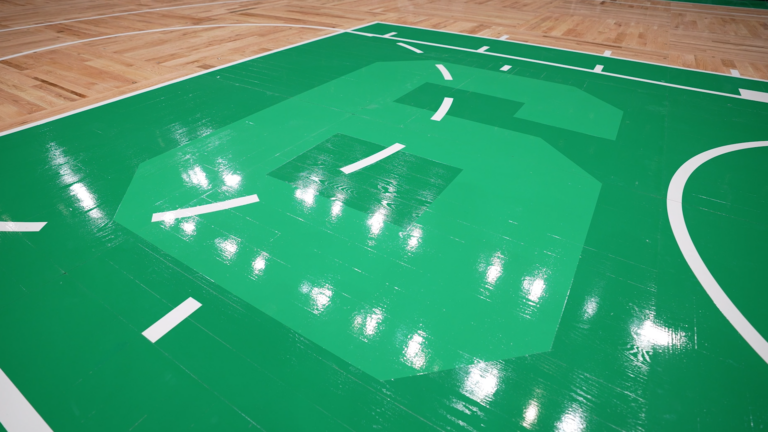 Celtics add No. 6 in parquet paint to honor Bill Russell