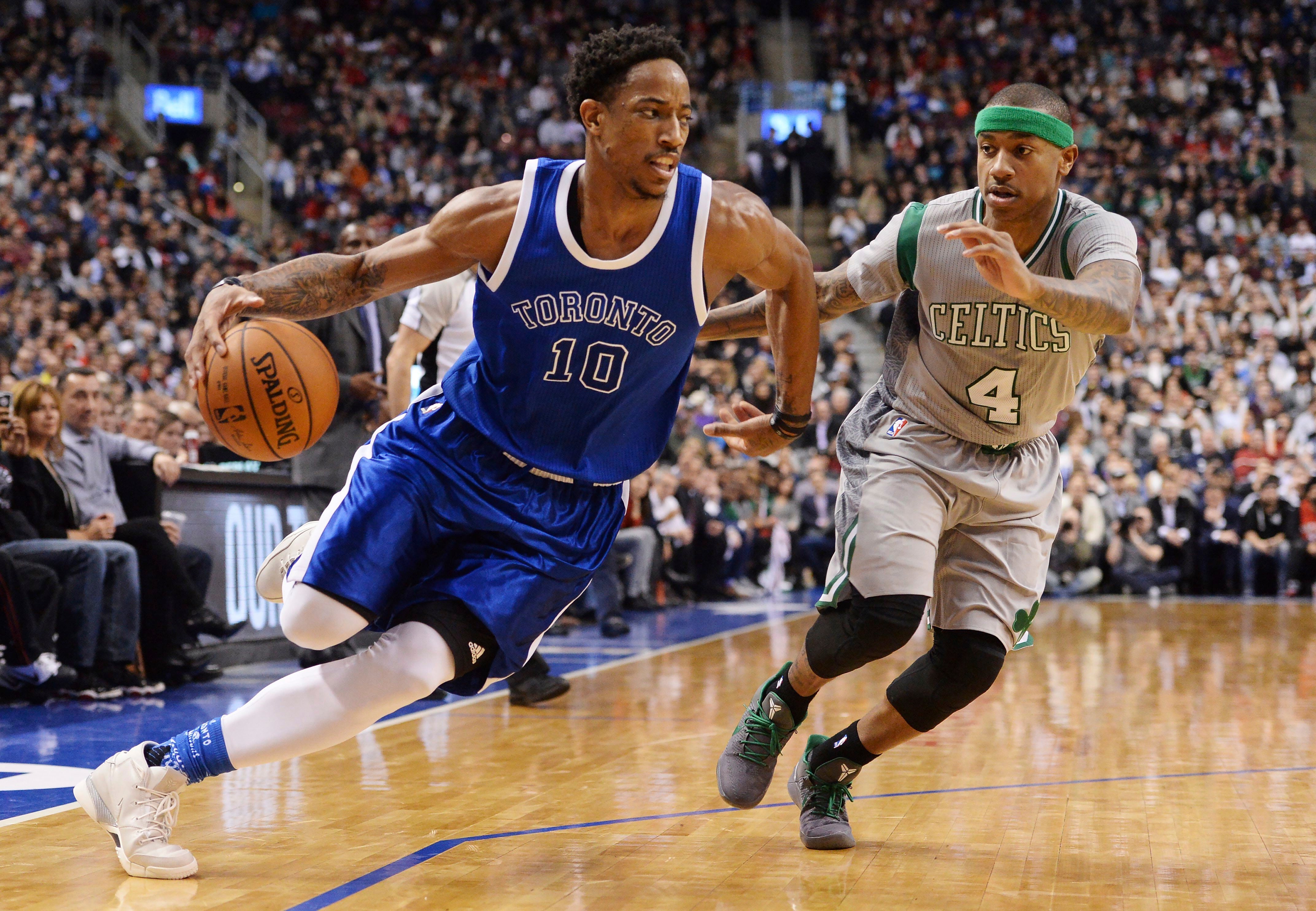 Raptors’ DeMar DeRozan drives past Celtics’ Isaiah Thomas during the second half.

TORONTO (AP) — Faced with the possibility of their longest losing streak in over a year, DeMar DeRozan and the Toronto Raptors finally hit their stride.

DeRozan had a season-high 41 points and Toronto overcame a late 16-point deficit to beat the Boston Celtics 114-106 on Tuesday night.

‘‘You’re going to lose games in this league,’’ DeRozan said after pulling down a career-high 13 rebounds. ‘‘But you don’t want to make it more than one.’’

The Raptors bounced back after losing to Chicago and Houston over the weekend and haven’t lost three straight since a West Coast trip in November 2015 when they come up short in Sacramento, Utah and Golden State.

Toronto also kept itself above Boston in the Eastern Conference standings. A win would have pulled the Celtics even with the Raptors for second place behind Cleveland.

Raptors coach Dwane Casey called the game a ‘‘bloodbath.’’ Toronto prevailed on the boards, 50-33, thanks largely to Jonas Valanciunas. The Lithuanian center had a career-high 23 rebounds to go with 18 points.

‘‘He had some sticky stuff on his hands today so he caught everything that came off the rim,’’ DeRozan said of his teammate. ‘‘He gave us the opportunity to have those possessions and get back in the game.’’

Boston led from the second quarter until Kyle Lowry’s 3-pointer with 2:41 to play gave the lead back to Toronto. The Raptors had pulled within four at the end of the third quarter, mainly on the strength of DeRozan’s 19 points in those 12 minutes, but Celtics coach Brad Stevens said the end of both the third and the fourth quarters proved costly.

Isaiah Thomas had 27 points for Boston.

‘‘We gave them fouls and offensive rebounds. They took advantage of that,’’ Thomas said. ‘‘That’s probably the big thing. If we would have got a few more stops, we would have been all right.’’

Raptors: F Patrick Patterson made his first start of the season. … Toronto stayed a perfect 6-0 against Atlantic Division opponents this season. … For the third time this season, the Raptors wore their blue Toronto Huskies road uniforms and played on an alternate court with the logo of the Huskies, a team from the NBA’s inaugural 1946-47 season which lasted just one year before folding. Toronto is now 3-0 wearing the uniforms.

After making at least 17 3-pointers in its last four games, the Celtics had a chance to tie the NBA record of five, set by Houston earlier this season. They came up short, converting just 9 of 27 shots from beyond the arc.

Because the Cleveland Cavaliers coaching staff is prohibited from working the All-Star Game in consecutive seasons, staffs from Toronto and Boston are vying to represent the Eastern Conference for the game next month in New Orleans. The reward goes to whichever team has the best record after Feb. 5. ‘‘That’s a real honor to be part of a team that’s in a position to do that,’’ Boston coach Brad Stevens said.

The national anthem singer flubbed a couple of lines during the singing of O Canada before the game, and the crowd at the Air Canada Centre joined in to help out and see her through to the end.

Celtics: Host Washington on Wednesday night looking for a fourth straight home win over the Wizards.

Looking back over the 8 years since the Celtics-Nets trade