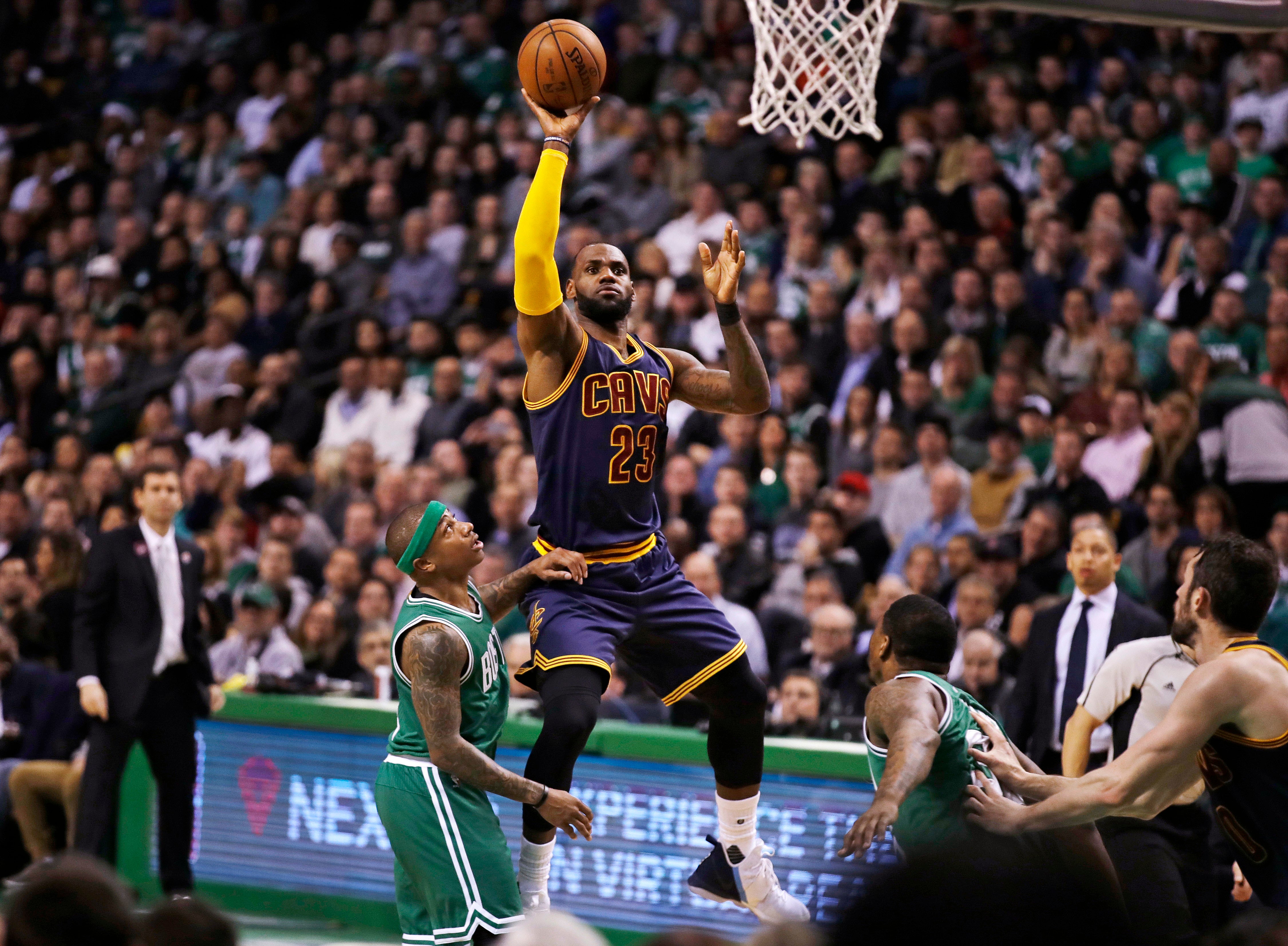 BOSTON (AP) — LeBron James and the Cavaliers sent a message to the Celtics in their final matchup during the regular season: They won’t relinquish the Eastern Conference’s top seed that easily.

James had 36 points, 10 rebounds and six assists and the Cleveland ran past the Boston 114-91 on Wednesday night to move back into first place in the East.

The teams had identical records entering their final regular-season matchup, but Cleveland (51-27) now has a one-game lead over Boston (50-28) with only four games to play. Cleveland also holds the tiebreaker with the Celtics for the top seed, if needed.

‘‘Just trying to get our team right going down the stretch brings out the best in me,’’ James said. ‘‘We knew we were coming to a hostile building tonight and just wanted to try and play our game … and we did that.’’

The Cavaliers played without starting center Tristan Thompson, who was out with a sprained right thumb. But they made due without him, surging at the start of the second quarter and taking as much as a 29-point lead in the third quarter. They also outrebounded Boston 51-38.

‘‘We laid an egg tonight,’’ Thomas said. ‘‘There’s no way around that. We didn’t take advantage of the opportunity that we had tonight.’’

James’ output has increased noticeably over the last week as the regular season winds down. He entered Wednesday coming off back-to-back triple doubles in Sunday’s double-overtime win against Indiana and a blowout win over Orlando Tuesday, while logging 89 minutes over those two games.

He played another 39 minutes Wednesday, finally going to the bench with 4:04 remaining.

The Celtics came out of the gate stale offensively. Thomas went 5 of 9 from the field in first quarter, while the rest of his teammates were just 3 of 12.

Cleveland seized on Boston’s sluggishness at the start of the second quarter, outscoring the Celtics 22-4 over the first 6:40 of the quarter.

James was active on both ends during the run, exploding to the rim for several easy baskets. He also did it on the defensive end, notably stuffing Marcus Smart with a two-handed block .

Even with Thompson out, this was the healthiest Cleveland team Boston had seen since the teams’ first meeting in November.

Trade acquisition Kyle Korver recently returned to action from a sore left foot and J.R. Smith was back after missing nearly three months following thumb surgery. Kevin Love is also back in the fold after he underwent a knee operation.

The Celtics are going in the opposite direction on the injury front, with Avery Bradley playing Wednesday despite dealing with stomach issue that had sidelined him for two straight games and Jae Crowder playing through a sore left elbow.

James said it’s to be determined whether his team has truly turned a page this week.

‘‘Only time will tell,’’ he said. ‘‘But we played Cavs basketball tonight and when we do that we’re a pretty good team. So we’ve got four more games left and we can see how we can finish the season off.’’

Cavaliers: It was James’ 22nd 30-point game. … Won for just the second time this season on the second night of a back-to-back (were 1-9 entering Wednesday). … Thompson’s absence ended his streak of consecutive games played at 447 — the longest in team history and the longest active streak in league.

‘‘I thought they were better, quicker to the ball, you name it — they were quicker in every category, and made it really tough on us. We didn’t match them.’’ — Celtics coach Brad Stevens.

The Cavs said an MRI confirmed Thompson’s thumb sprain and at a minimum he will miss Friday’s home matchup with Atlanta as well.

While Frye started in his place Wednesday, another option will be Larry Sanders, who Cleveland recalled from its D-League affiliate in Canton. Sanders was out of the league for two years before the Cavs signed him on March 13.

‘‘We’re gonna get him out there and just kind of see what he can do,’’ Cavaliers coach Tyronn Lue said. ‘‘We’re confident that he can do some good things.’’

Cavaliers: Host the Hawks on Friday.

Celtics: Play at Atlanta on Thursday.

NBA playoff TV ratings are up, and having fans in the stands may be a big reason why