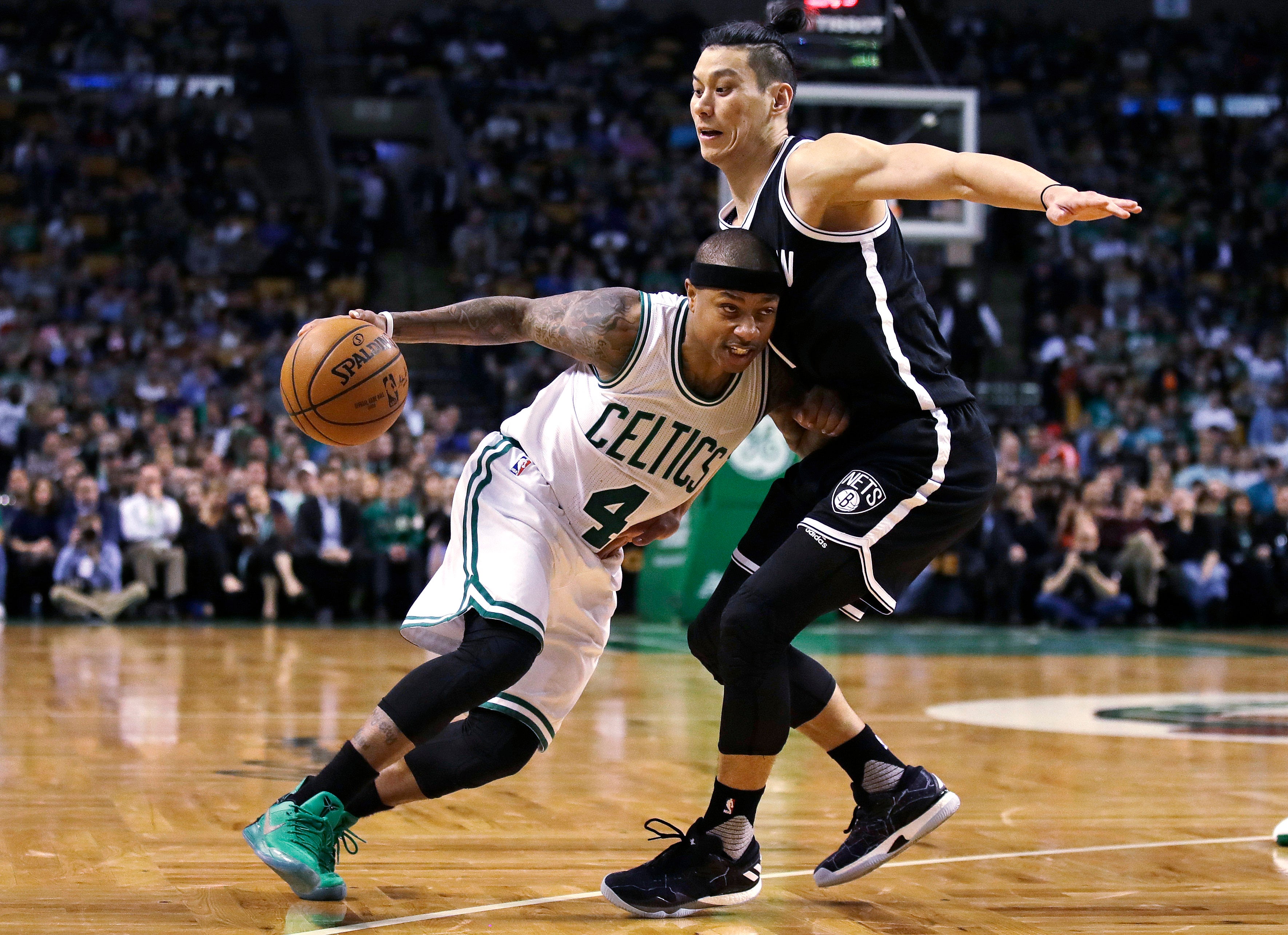 Celtics’ Isaiah Thomas tries to drive past Nets’ Jeremy Lin during the second half.

BOSTON (AP) — The Celtics now control their own fate in their quest to secure the Eastern Conference’s top playoff seed.

Isaiah Thomas scored 27 points to help Boston beat back a fourth-quarter charge and defeat the Brooklyn Nets 114-105 on Monday night.

The win clinched the Atlantic Division title and no worse than the No. 2 seed for the Celtics. More importantly, with Cleveland’s overtime loss at Miami on Monday night, a Boston win in its regular-season finale against Milwaukee on Wednesday would give the Celtics the No. 1 seed.

But if Boston loses to the Bucks and Cleveland wins its finale against Toronto, the Cavs would own the tiebreaker by virtue of their 3-1 head-to-head record with Boston.

Thomas said being this position ‘‘means a lot.’’

After Monday’s win several players gathered in the trainer’s room to watch the end of Cleveland’s game with Miami. When the Cavs tied it late in OT on Deron Williams’ 3 before he completed four-point play to put them up one, screams could be heard from inside. Clapping was heard again from the same room when the Heat finished their victory, cementing the Celtics’ chance to claim top seed Wednesday.

‘‘It shows that we’re starting to play the right way,’’ Bradley said.

Brooklyn trailed by 27 in the third quarter before an 18-5 run got it back into the game.

The Nets got as close as six in the fourth, but Thomas and Horford combined for 15 points in the period to help secure the victory.

Jeremy Lin led the Nets with 26 points and 12 rebounds. Brook Lopez finished with 25 points, and passed Buck Williams to become the franchise’s career leading scorer with a jumper late in the fourth quarter.

Playing on a day’s rest following its win at Charlotte on Saturday, Boston led by as many as 21 in the first half.

Brooklyn also had a day off coming off Saturday’s one-point victory over Chicago, but couldn’t find the basket early on. The Nets missed 17 of their first 20 shots and shot just 27 percent in the opening 24 minutes.

Nets: Sean Kilpatrick (left hamstring) and Quincy Acy (sore left ankle) both sat out and each will also miss Wednesday’s regular-season finale. … Shot just 14 percent (3 for 21) from the field and 12 percent (1 for 8) from the 3-point line in the first quarter.

Celtics: This marks their first division title since the 2011-12 season. … Celtics have swept the Nets in a regular-season series for the first time since going 3-0 vs. Brooklyn in 2011-12. … Thomas extended his franchise record to 56 straight games with a 3-pointer. … Improved to 21-5 at home since Jan. 1.

‘‘We haven’t been very good in those stretches. We’ve been fortunate that it hasn’t come back to bite us, but we got to get better at that.’’ — Celtics coach Brad Stevens on losing big leads.

Lopez started slowly, but passed Williams with a turnaround jumper on the baseline with just over 4 minutes left in the fourth quarter. He said he didn’t take moving to the top of the Nets’ record books lightly.

‘‘It’s a great honor, obviously a lot of amazing players have played here,’’ Lopez said. ‘‘I’m just proud to have my name up there with those guys.’’

Nets: Brooklyn concludes its season at Chicago on Wednesday.

Celtics: Host the Bucks in their regular-season finale Wednesday.