Philadelphia and Boston have agreed in principle on a trade where the 76ers would acquire the chance to take Markelle Fultz with the No. 1 pick in Thursday’s NBA Draft, a person with knowledge of the deal told The Associated Press.

The Celtics will get the No. 3 pick, plus an additional first-rounder in either 2018 or 2019, according to the person who spoke on condition of anonymity Saturday night because the trade has not been formally approved by the league. The agreement between the Celtics and 76ers was struck not long after Fultz worked out for Philadelphia on Saturday evening.

Once the trade goes through, Philadelphia will own the NBA’s No. 1 selection for the second straight season.

Fultz — donning a Philadelphia cap as he arrived at the team’s practice facility — visited the 76ers in a hastily arranged get-to-know-you session, with the workout and meeting with team officials on his itinerary. That visit was essentially the final hurdle to clear before Boston and Philadelphia could decide to actually consummate the trade.

“I don’t really pay attention to everything that’s going on,” Fultz said. “I’m truly blessed to be in this position. Whatever happens, I’m looking forward to taking my talents to wherever I go.”

Barring any other changes before Thursday, the first four spots in this year’s draft order would mirror the first-four from last year: Philadelphia at No. 1, the Los Angeles Lakers at No. 2, Boston at No. 3 and Phoenix at No. 4.

Fultz’s rise to stardom has been rapid. In 2014, he was playing junior varsity basketball in high school. Barely three years later, he’s almost certainly going to become the No. 1 pick in the NBA draft — and if he gets to start his pro career by calling Philadelphia his new home, he’ll be living roughly a 2 1/2-hour drive from his hometown of Upper Marlboro, Maryland.

“It would be pretty cool. Just being with a young team,” Fultz said. “The upside of it would be crazy. I’m close to home, so a lot of my family can come out and just show love. This city has great fans.”

The 6-foot-4 guard averaged 23.2 points, 5.7 rebounds and 5.9 assists in 25 games during his lone college season at Washington, excelling on a team that finished 9-22 and lost its final 13 games. Fultz led the Pac-12 in scoring and finished No. 6 among all Division I players, and was the top freshman scorer in the country.

Over the past 10 seasons, only two other freshmen had a better scoring average in college: Kevin Durant for Texas in 2006-07, and Michael Beasley for Kansas State in 2007-08.

Durant and Beasley were both No. 2 draft picks.

Fultz is apparently going to get taken one spot better.

“I’ll do whatever it takes to help any team I go to win,” Fultz said.

Philadelphia had the No. 1 draft spot three previous times, taking Doug Collins in 1973, Allen Iverson in 1996 and Ben Simmons a year ago.

The 76ers have a top-three pick for the fourth straight year: No. 3 Joel Embiid in 2014, No. 3 Jahlil Okafor in 2015 and Simmons in 2016. But with Fultz, Philadelphia — which has asked its fans to endure some very dismal stretches and “Trust The Process” for the past few years — would likely expect to turn a real corner toward respectability again.

Philadelphia went 28-54 this past season, after winning 19, 18 and 10 games respectively in the previous three seasons.

Last season’s improved win total came with Okafor (50), Embiid (31) and Simmons (0) combining for 81 appearances, as Philadelphia’s trend of being snakebitten by injuries continued. Embiid and Dario Saric will finish in the top three when rookie of the year results get announced on June 26, and Simmons is expected to be ready for next season after recovering from foot surgery.

Embiid posted a photo on Saturday of he and Saric standing in front of a locker — already bearing Fultz’s name.

“Embiid, he and I have been talking before when I was in college,” Fultz said. “He’s a cool guy. He’s giving me tips and pointers and he’s pretty funny, so when I saw that it was pretty cool and pretty funny. I’m pretty happy that the players here want me to come here.” 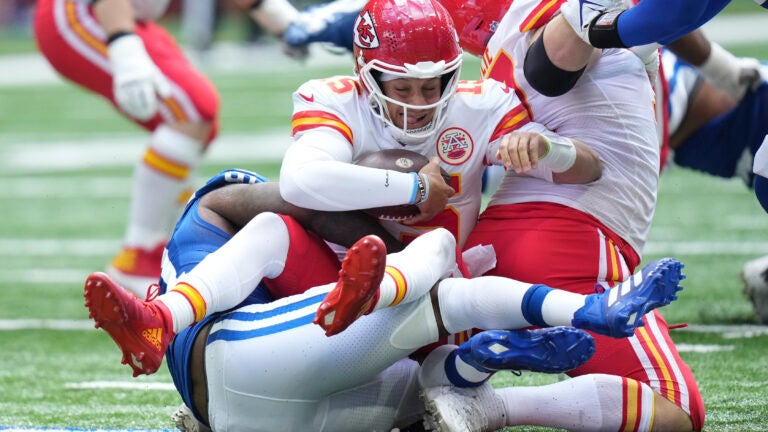