Marcus Morris, who the Celtics received in return for Avery Bradley, has a lot to offer on the court.

The durable 6-foot-9 forward offers the team size, decent three-point shooting, and a proven defensive record against arguably the league’s most unstoppable player.

But Morris also arrives in Boston with potential off-court baggage, stemming from accusations that he, his twin brother, and three other men were involved in the beating of a man outside a basketball game in Phoenix in 2015.

The Morris twins have denied the allegations.

Here’s what you need to know about the charges, the forthcoming trial, and how it all could affect Morris’s availability this coming season for the Celtics.

The case dates back to January 2015, when both Morris and his twin, Markieff, played for the Phoenix Suns.

According to the Arizona Republic, Phoenix police say the twins and three other men were involved in an assault on a man named Erik Hood, who had sent a perceived inappropriate text message to their mother in 2010.

Hood reportedly told police he texted the twins’ mother, Thomasine “Angel” Morris, that he would always be there for her. But he said he believed the text was seen by a friend who inferred it meant they were having a sexual relationship. Hood said he believed a man named Julius Kane ultimately showed the texts to the Morris twins.

According to the Associated Press, Hood told police that Angel Morris texted him on the day of the assault to ask where he was. Angel Morris reportedly denied Hood’s claim when interviewed by police in February. However, the Republic reported that police records show that officials found “evidence to the contrary.”

According to the Republic, the alleged assault occurred outside a Phoenix recreation center, where Hood, another woman, and the Morris twins were among the crowd at a prep basketball tournament:

Hood told investigators he and the woman were leaving the facility when they were accosted by Julius Kane, 25, the man Hood believes told the Morris twins about the text messages, the report said.

During the confrontation, someone punched Hood in the back of the head, and Hood tried to flee.

Police said Kane and another person caught up with Hood outside the door near some picnic tables, where someone held Hood down while others kicked and punched him, records show. Hood says he was attacked by five people, in all.

Hood reportedly escaped a second time and was near the front of the complex when the group caught up to him and assaulted him again to the point of unconsciousness, according to the police report.

Hood reportedly suffered “a broken nose, a large knot on the back of his head and abrasions,” according to police records, and later identified Kane and the Morris twins as three of the five people involved in the attack.

The woman Hood was with also identified the Morris twins as being among the attackers. Roughly two dozen other witnesses reportedly interviewed by police were unable to identify any of the attackers, though some said they saw the group flee the scene in a Rolls-Royce Phantom.

It wasn’t for another four months that the allegations against the Morris twins became public, as the Republic reported April 7, 2015. At the time, no arrests or charges had been filed.

That changed two weeks later when the Maricopa County District Attorney’s office indicted both of the twins on two counts each of felony assault.

More details of the the alleged assault were also reported at that time. According to a April 21 Republic article, both Hood and a witness said Marcus was directly involved with the physical assault, while Markieff tried to divert the attention of passersby.

Hood, who is 6 feet 5 and 245 pounds, told police he again tried to run away but was held down and kicked again. A witness saw Marcus near that circumstance and another witness told police that Markieff tried to convince people coming out of the gym that there was nothing to see, prompting one coach to chastise him as a poor role model.

Hood told police he saw Marcus kicking him in the head and later recanted whether he knew Markieff was involved. Hood and his friend said the incident began when Kane approached them as they exited the gym and said, “You know what time it is.”

The Morris twins’ agent, Leon Rose, said in a statement he was “confident” their names would be cleared when more facts came out, while the two NBA players apologized “for the distraction this has caused to our fans and the Suns.”

The Morris twins also said they were aware of a fight at the tournament, where a team they sponsored was playing, but were not involved. They also reportedly told police they didn’t know Hood, though they said his name sounded familiar. Hood, meanwhile, had told police he mentored the twins through college, but had a falling out in 2010 when the text message in question was allegedly sent.

“I feel like if we wasn’t in the NBA, (expletive), we wouldn’t be having this conversation,” Marcus told a police detective, according to the Republic.

The Morris twins pleaded not guilty to the charges during a court appearance in May of that year.

In October 2016, Hood’s lawyers also filed a civil lawsuit against the Morris twins and the three other defendants, seeking compensatory and punitive damages.

Possible implications for the Celtics

The Morrises’ trial date has been set for August 21, so it appears unlikely that the trial itself would conflict much with the Celtics schedule. NBA training camps begin in late-September, and league commissioner Adam Silver said in a press conference last week that the 2017-18 regular season will open October 17.

But if Morris is convicted, the Celtics will likely be without their new forward for some amount of time due to the nature of the charges against him.

In a recent Sports Illustrated article, University of New Hampshire sports law professor Michael McCann noted that, under Arizona state law, the felony assault charges against Morris carry “a maximum prison sentence of 3.75 years and a presumptive sentence of 2.5 years.”

Given that Morris’s criminal history includes just one citation for misdemeanor battery, McCann says its unlikely he would receive “anywhere near the maximum sentence,” but could very well still face “some time behind bars or at least a suspended sentence, probation and required community service.”

Additionally, Section 7 of the current NBA collective bargaining agreement mandates a minimum 10-game suspension for any player convicted of a violent felony:

When a player is convicted of (including a plea of guilty, no contest, or nolo contendere to) a violent felony, he shall immediately be suspended by the NBA for a minimum of ten (10) games.

According to McCann, it’s possible that Morris could agree to a plea deal with prosecutors and plead guilty to a misdemeanor — rather than felony — charge. But even then, he could still be suspended by Silver under Article 35 of the NBA constitution, which says the commissioner has the right to punish players for lesser convictions [emphasis added]:

The Commissioner shall have the power to suspend for a definite or indefinite period, or to impose a fine not exceeding $50,000, or inflict both such suspension and fine upon any Player who, in his opinion, (i) shall have made or caused to be made any statement having, or that was designed to have, an effect prejudicial or detrimental to the best interests of basketball or of the Association or of a Member, or (ii) shall have been guilty of conduct that does not conform to standards of morality or fair play, that does not comply at all times with all federal, state, and local laws, or that is prejudicial or detrimental to the Association.

McCann pointed to Silver’s eight-game suspension of guard Darren Collison last October for pleading guilty to misdemeanor domestic battery as a baseline for what Celtics fans might expect if a similar scenario turns out to be the case for Morris. 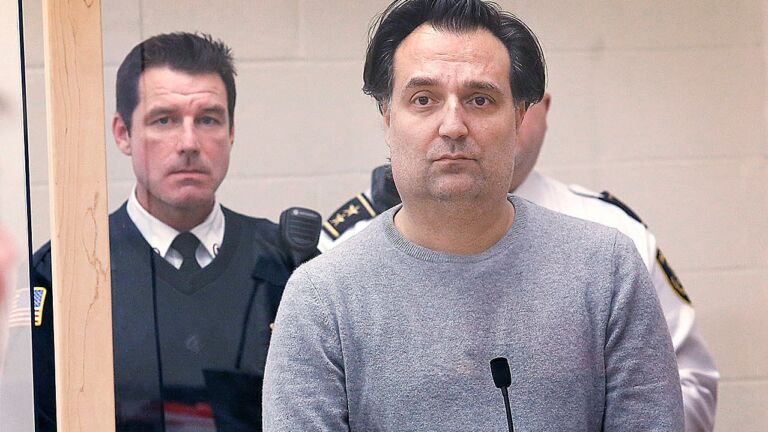