There has been a cloud of mystery surrounding Isaiah Thomas’s hip injury since he was diagnosed with a torn labrum three months ago.

Thomas opted against surgery and spent his summer in rehabilitation, yet it’s still undetermined when he will make his debut for the Cavaliers and whether he indeed needs surgery.

“When you have a labral tear from impingement, that means that the way that Isaiah Thomas’s hip is shaped, it’s shaped in a way that’s not round,’’ Ochiai said. “In certain positions, his hip is not round on round. That’s why it’s called impingement, the bone will impinge because it’s not a round-on-round joint. Once you tear your labrum from that, that’s the most common cause of labral tears in any athlete, that tear is not going to heal. It’s always going to be torn, the question is how do you treat that?

“And there are some high-level athletes who are playing professional sports right now who have labral tears from impingement who are doing fine.’’

Ochiai said rehabilitation without surgery consists of reducing inflammation, strengthening muscle, and “trying to get the hip to be dynamically stabilized by the muscles around the hip.’’

“Surgery is not a slam dunk,’’ Ochiai said. “Another important variable is, is there already articular cartilage damage? When you lose that, it’s arthritis in the hip.’’

Ochiai said that if a hip has enough cartilage damage — i.e., bone on bone — then a patient is not eligible to have hip labrum surgery.

“It’s possible that you do a great operation on his labrum, that you fix the labrum and you correct his impingement, and he continues to have pain because he has gliding cartilage damage to your socket, so [pain] could continue after the repair of the labral tear and impingement.’’

According to Ochiai, surgery would likely keep Thomas out three or four months.

“Sometimes it’s longer, but in general three months,’’ Ochiai said. “I’ve done some high-level athletes that have come back quicker. It all depends on what the gliding cartilage looks like.’’

Thomas, who last played May 19, recently told ESPN that he is not “damaged goods’’ and the injury is not career-threatening.

He spent the entire summer rehabilitating, and Celtics coach Brad Stevens said last month that Thomas was supposed to undergo another series of scans that would determine his progress. It is believed Thomas rejected surgery because he did not want the rehabilitation process or perception that he was injured to affect the final season of his contract and his potential of signing a maximum contract.

It is unclear whether Thomas has any cartilage damage, which would make him ineligible for labral surgery. But the rehabilitation process has taken longer than expected.

The Celtics initially believed Thomas would be ready for training camp, but before they made the trade it was apparent that the point guard was weeks away from beginning basketball activities. Thomas told the Globe in his final interview as a Celtic that he was going through all of the rehabilitation measures but offered no date for his return. 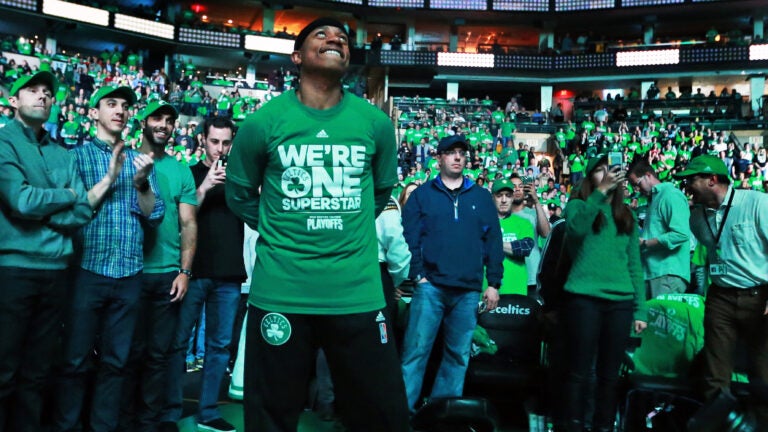 'Heard that before': Isaiah Thomas weighed in on the report about Robert Williams's injury