The Celtics introduced two of their newest stars, Gordon Hayward and Kyrie Irving, to the city on Friday. While the players appear to have taken very different paths to Boston—one is an NBA champion riding the momentum from three straight finals appearances, while the other is a budding superstar with college ties to head coach Brad Stevens—their histories have some interesting similarities.

The Cavaliers that almost were

When Hayward was a restricted free agent in 2014, he visited Cleveland as a potential new home. While there, he met with Irving.

“Kyrie came in and was saying how much fun it would be if I would be on the team and kind of recruited me to go there,” he recalled during Friday’s press conference. “Then LeBron came and that kind of squashed that whole thing.”

While Hayward’s story received quite the laugh from the audience, the Cavaliers’ pursuit of the All-Star was awfully serious three years ago. According to ESPN’s Brian Windhorst, the team was initially unsuccessful in its attempt to lock down James, which led them to ramp up efforts to sign Hayward.

Per Windhorst, “the Cavs see Hayward as a complement to young franchise cornerstones Kyrie Irving and No. 1 overall draft pick Andrew Wiggins.”

Of course, James ultimately opted to return to Cleveland and eliminated the possibility of teaming up with Hayward. But as Hayward said on Friday, things eventually “came full circle, and here we are now.”

The Celtics that almost weren’t

Despite coming to Boston via two different methods (free agency versus a trade), both arrivals were subject to a bit of chaos before becoming set in stone.

In Hayward’s case, news of his decision leaked prior to his actual decision was made. According to his agent Marc Bartelstein, the forward penned three different versions of his Players’ Tribune announcement and was still mulling over his options when ESPN’s Chris Haynes broke the news regarding his apparent choice.

Bartelstein subsequently denied the report, telling sources that a final destination had yet to be chosen. Though Hayward was “strongly leaning” toward Boston, he was still undecided at the time of Haynes’ report.

Gordon Hayward’s agent, Mark Bartelstein, tells ESPN: “Gordon hasn’t made a decision yet. We are still working through it.”

The uncertainty generated pandemonium among fans and the media, as it appeared for a number of hours that nobody (other than Hayward, of course) knew the true decision. Later that evening, however, the forward cleared up any confusion by revealing that he would be signing a four-year, $128 million contract with the Celtics.

Irving, who was traded to Boston approximately two months after the acquisition of Hayward, encountered a different scenario of uncertainty. Three days after Boston had announced that it would be trading Isaiah Thomas, Jae Crowder, Ante Zizic, and a first-round draft pick to Cleveland in exchange for Irving, there appeared to be a chance the deal might not actually happen.

Upon examining Isaiah Thomas’ hip during his team physical, the Cavaliers were not positive they wanted to complete the trade as it stood. They began weighing their options, and fans and media stressed over the possibility of a voided deal.

Cleveland ultimately decided to ask Boston for further compensation, which led the Celtics to give up a second-round draft pick in order to satisfy Cleveland.

Hayward and Irving share the same date of birth, but were born two years apart. The two Aries are well aware of the coincidence, as pointed out by Hayward at their introductory press conference.

Calling the opportunity to play together “destiny,” the 27-year-old said teaming up with his birthday twin “was bound to happen at some point in time.”

Not a lot of partying will be happening on their special day this season, however, as the Celtics will be in Portland for a 10 p.m. contest against the Trailblazers.

Growing up in a city

Hayward and Irving had played with only one other team prior to becoming teammates, and in their farewells to their former homes, both players cited similar experiences.

Hayward, who entered the league as a scrawny 20-year-old out of Indiana, remembers feeling like “just a kid” when he first moved to Utah. In his Players’ Tribune piece, he commented on the transformation that has since taken place:

I just think about how far I’ve come during my time here. I’ve truly grown up in Salt Lake. I’ve become a man, and I’ve become a professional. I’ve gone from being a kid … to now having a wife and two kids. I’ve gone from having anxiety over leaving my family … to now having a family of my own. A lot has happened to me during my time here, and I honestly can’t think of any part of it that I haven’t cherished.

Irving expressed similar thoughts in his goodbye video to Cleveland. The guard entered the league as a 19-year-old from Duke University and called his teenage self “very, very immature.” Reflecting further on his transition from a college freshman to a six-year NBA veteran, Irving emphasized that he saw Boston as an opportunity to continue this growth.

“It was my time to do what was best for me in terms of my intentions and that is going after something bigger than myself, honestly, being in an environment that is conducive to my potential,” he said on Friday. “Taking this next step as a 25-year-old evolving man and basketball player.” 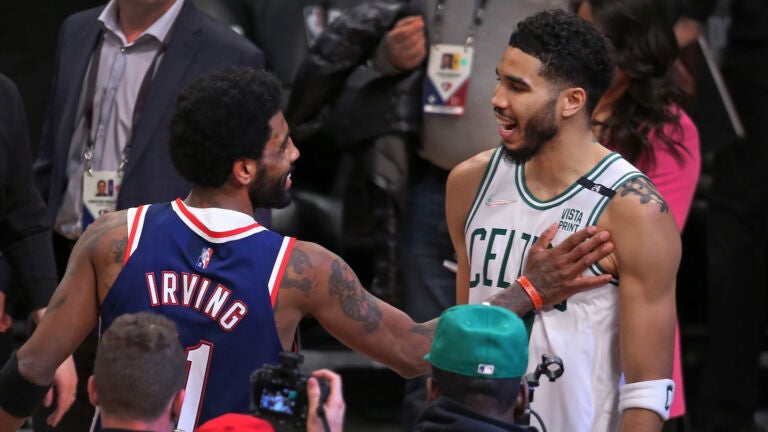