Kyrie Irving is a scorer. Everyone in the league knows he has an impeccable handle and the creativity to get the ball into the basket. Then again, you can say the same about Isaiah Thomas. They both had similar seasons scoring-wise last year, but Boston didn’t make this trade to have a similar player at the point. They made this deal to unlock something in Irving that could raise his game to another level.

Most of us look to Brad Stevens as the coaching savant who will conduct a basketball symphony in which Irving’s offense will flow in concert with the rest of the Celtics. While it’s true that Stevens holds one of the keys to unleashing Kyrie 2.0, he’s not the only one. Much like launching a nuclear attack in the movies, you need more than one key to make this work.

In taking a closer look at the types of plays Irving ran in Cleveland, one thing became clear. When he wasn’t isolating and using his ball-handling skills to put defenders on skates, he was often scoring in spite of the deficiencies of certain teammates. Well, one teammate in particular: Tristan Thompson.

46.3 percent of Irving’s total offense came off of pull-up jumpers and 35 percent of his offense came after seven or more dribbles. Whether he was bringing the ball up the floor or trying to beat a defender somehow, the bulk of Irving’s offense involved dribbling, often a lot, and then pulling up for a jump shot.

Isaiah’s offense involved a lot more catching-and-shooting and it involved a lot more going to the rim. He went to the line almost twice as often as Irving, though it’s Irving with the with reputation as the attacker and finisher. A lot of this was Thompson’s fault.

So the other key to unlocking the next level of Kyrie Irving belongs to one of his new teammates: Al Horford. As you’ll see, the simple substitution of running two different plays with Horford could make Irving’s life much easier.

Cleveland’s offense cratered without LeBron James on the floor, which is leading to some trepidation over what Irving will bring to Boston’s offense. Here’s why we won’t have to worry.

A dribble hand-off is a sort of variation of a pick and roll play. Instead of a guy running over to pick for a ball-handler, he actually dribbles toward the guy and then impedes the progress of that guy’s defender.

Irving took 76 shots off hand-off plays in Cleveland. They were very often run with Tristan Thompson, who is not very good at them. The result was an effective field goal percentage of just 43.4.

By contrast, Thomas took nearly twice as many of those shots (151) with an effective field goal percentage of 51.7. The difference with Isaiah and other Celtics guards is they ran the DHO with Al Horford.

Here’s Tristan Thompson running a hand-off with Irving. In the first video, he doesn’t do enough to get in Elfrid Payton’s way, which gave Payton time to recover and block the shot.

In this one he barely touches Thomas, who gets around Thompson to challenge Irving shot.

Now watch how Horford executes the play. He gives Avery Bradley time to recognize the play and then space to get a good shot off by fully picking off his man. Irving’s ball-handling ability could turn a play like this into a drive to the basket or he could take a step back and shoot a three.

And because Horford is such a good passer and able to read not only opposing defenses, but also his own teammates, things like this play can happen:

Horford dribbles over like he’s going to run a hand-off play. Thomas starts towards Horford but then cuts back door where he gets a perfect pass for the layup.

The hand-off is a great way to get a guy open shots in a free-flowing motion offense. The scorer can start off the ball while other guys behind the play are creating action that requires defensive attention. Horford is the perfect guy for this kind of play because of his intelligence, precision, and passing ability. Last season, Thomas was second in the NBA in field goal attempts off hand-offs and Avery Bradley was eighth. Thomas was second in field goals made and Bradley was tied for seventh (with Gordon Hayward, coincidentally. He’ll also thrive with this play this season). The Celtics love to run this play and it will be a great way to get Irving clean looks without having to isolate.

Pick and roll vs. Pick and pop

The pick and roll is a staple in the NBA. The right personnel could crush a team all night long with multiple options off that same pick and roll. The key to getting good shots here is the ability to keep the defense guessing. That’s where the “roll” turning into a “pop” (popping out for a three or long jumper instead of rolling to the basket) comes in very handy.

Thomas and Irving averaged 6.6 and 6.7 field goal attempts respectively off the pick and roll last season. Thomas was the more efficient of the two, scoring 1.04 points per possession versus Irving’s 0.96. Thomas drew free throws 14.9 percent of the time compared to Irving’s 7.2 percent.

One reason Thomas was more efficient in pick and rolls was because of his partner, which means we’re again looking at the difference between Horford and Thompson. 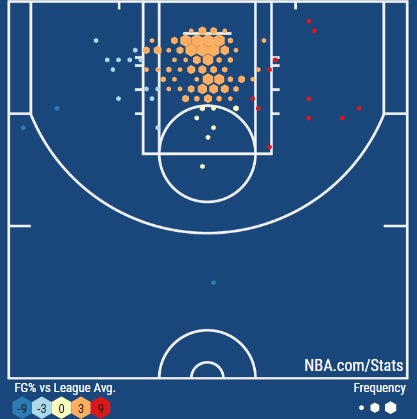 This is who Thompson is. He rarely ever strays more than five feet from the basket. Of his 437 field goal attempts last season, 76 were in the five-to-nine foot range. Only 22 came from further away. So when he set picks for Irving, he was always rolling to the basket. This leaves no guesswork for the defense, which leads to scenarios like this:

With Thompson no threat to pop, the defense sells out to stop Irving. The big cuts off the path to the hoop and the guard sells out going over the pick to block the shot. There’s no reason to go under a pick when guarding this pick and roll because Irving’s defender knows the big can show and cut the lane off. The end result is this: 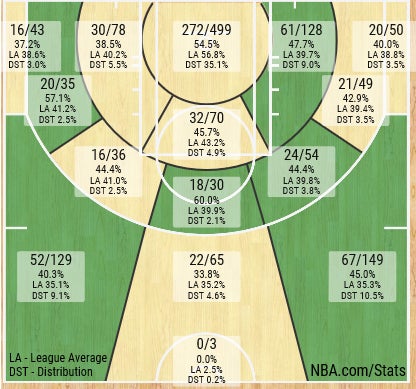 Look at the top of the key and the right side of the floor in particular. Those three green areas are VERY often where Irving pulled up for a mid-range jumper last season off pick and rolls. When he turned the corner on a screen and found nowhere to go, he often pulled up for jumpers rather than attack the basket. This is why Isaiah Thomas had so many more free throw attempts on pick and rolls. Irving was pulling up from 15-18 feet. Isaiah had more chances to get to the rim because Al Horford’s shot chart looks like this: 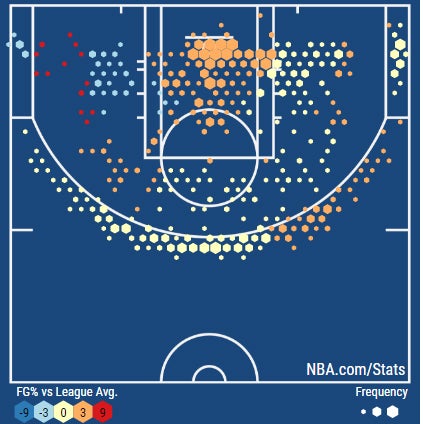 Al Horford’s 2016-17 shot chart.Watch him run a pick and roll with Avery Bradley where the defenders sell out just like they did on Irving:

Tristan Thompson isn’t doing that. Of course, the tradeoff is that Thompson is crashing the offensive boards so a bunch of his offense was cleaning up the mid-range misses. But Horford being the threat that he is creates the guessing game for the defense.

Sell out to stop Irving? Nope, we just saw Horford pop out for a three.

Still go over the top of the screen and have the big hedge but still respect Horford? Nope, then he’s too far out of position and there’s a lane to the basket. Since he’s out of position he, or a help defender, will be more likely to foul. This is why Thomas got to the line more often.

Go under a screen? Nope, Irving will just rise up from three behind the screen.

Send a help defender? Nope, then you’re leaving someone open in the corner.

Having that pop option opens up the world for Irving. Don’t be surprised if these pick and roll numbers switch and it’s Irving who ends up at the line more this season.

There’s only one LeBron James, and no longer having him as a teammate changes how Irving will be asked to score the ball. Obviously Boston doesn’t have a guy nearly that good on the team, but they do have a lot of really good players who will command the respect of the defense and open the floor for Irving to make decisions.

These may just be two plays, but the dribble hand-off and pick and roll run with Horford instead of Thompson will open a number of options that simply didn’t exist for Irving in Cleveland. Once he gets comfortable with all those options, he might be able to find a level of offense that was closed off to him in the past. 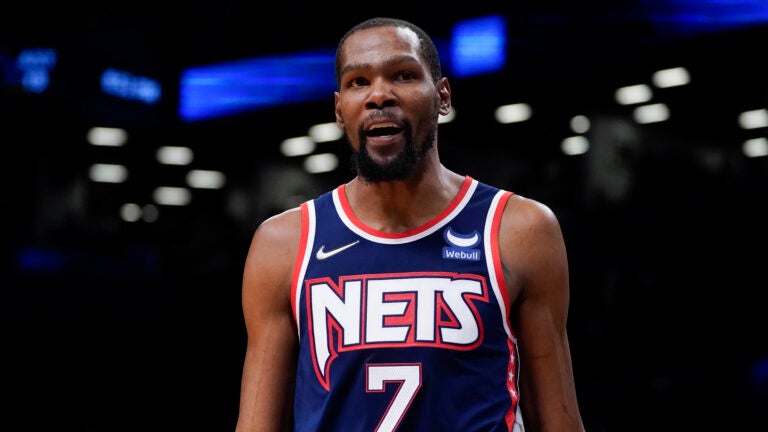 For Celtics, Kevin Durant trade would be the cold pursuit of a championship