The Morris brothers have been on trial for the past two weeks on charges that they helped three other people beat 36-year-old Erik Hood in January 2015 outside a high school basketball game in Phoenix.

At that time, the 28-year-old brothers played for the Phoenix Suns. Marcus now plays for the Boston Celtics and Markieff is with the Washington Wizards.

Defense attorneys Timothy Eckstein and James Belanger patted the brothers on the back as the verdict was read. The Morris twins hugged their attorneys after the jury was led out of the courtroom.

‘‘From the beginning we expected them to acquit but just putting this time here,’’ Marcus Morris said outside Maricopa County Superior Court.

Both players have missed the start of the NBA preseason because of the trial.

Another defendant, Gerald Bowman, also was found not guilty on two counts of aggravated assault. Two other co-defendants pleaded guilty to the charges on Sept. 13.

Hood did not attend court to hear the verdict read.

Belanger said in closing arguments that the case was tainted by Hood’s mentor trying to solicit two witnesses to implicate the Morris brothers for a cash payment in return.

Two witnesses testified about the mentor’s attempt and their refusal to lie. They both went to break up the fight and placed the Morris twins near the site but not as part of the altercation.

Belanger said he thought the defense had a very good case without that but when the jury found out ‘‘it was the prism that they had to look at everything else through.’’

Prosecutor Daniel Fisher had urged jurors to convict the brothers, saying Marcus Morris kicked Hood in the head and Markieff Morris acted as an accomplice because ‘‘they had an axe to grind’’ with him.

Defense attorneys pressed Hood during his testimony about his financial motives in the case and his knowledge of the NBA players’ substantial financial assets.

They also repeatedly said Hood lied to police nine times when he said both twins were involved in the assault. Hood later changed his statement to say Markieff did not beat him but had been in the vicinity.

Eckstein, the lawyer for Marcus Morris, said during closing arguments that Hood knew he had to ‘‘double down on Marcus’’ beating him because the case wouldn’t be worth anything without one of the brothers involved.

Hood testified he wanted justice for the beating that left him with a broken nose and other injuries.

He said he has known the Morris brothers since their youth basketball days, but they had a falling out in 2011.

Hood testified that his relationship with the twins became strained because of a misinterpreted text message he sent their mother. But he said there was nothing ‘‘improper’’ happening with him and their mother.

The Morris brothers said they felt relieved and were ready to get back to their teams.

‘‘We put our faith in our lawyers,’’ Markieff Morris said. 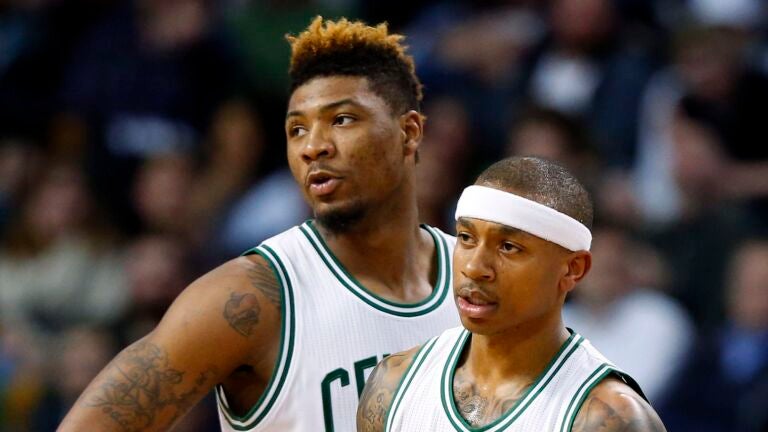