On May 26, 1999, the Celtics held a number retirement ceremony for legendary center Bill Russell. The event was emceed by Bill Cosby, and the deep list of luminaries included NBA greats Wilt Chamberlain, Kareem Abdul-Jabbar, and Oscar Robertson.

Near the conclusion of the nearly three-hour program at the FleetCenter, Russell and Celtics vice chairman Red Auerbach stood on the parquet floor next to a banner displaying Russell’s famed No. 6. The two tugged on a rope and sent the white flag with the green numbers on it to the arena’s upper reaches. The standing ovation Russell received brought him to tears.

It was a stirring day but it was also quite unusual, because the Celtics were raising a number to the rafters that had already been up there for more than 27 years. Numbers typically are not retired twice.

But when No. 6 was put on a banner in 1972, only a handful of people were there to watch. There were no fans or television cameras. There was no massive celebration. Instead, there was a very brief and private ceremony that Russell had resisted until the end.

This is the story, told through interviews and news archives, of how and why one of the best basketball players of all time had his number retired in a quiet and near-empty arena.

Bill Russell, a 6-foot-10-inch center from Monroe, La., was a five-time NBA MVP and a 12-time All-Star. He helped the Celtics win 11 championships in 13 seasons from 1956-69, a feat that no athlete on a major American professional team has duplicated.

On June 30, 1969, Russell announced that he would retire from his roles as a player and head coach of the Celtics.

Auerbach soon inquired about organizing a day to commemorate his No. 6 at Boston Garden. But Russell refused the honor. Fusses made him uncomfortable, and he had lingering unease about his time in the city.

“He had issues with the Boston scene,’’ said Satch Sanders, Russell’s former teammate. “And those had never, in his mind, been cleared up.’’

After Russell joined the Celtics in 1956, he became the city’s first black star athlete. Although he emerged as a sports icon, his status made him a more visible target. His home in the mostly white suburb of Reading was once broken into and vandalized, with a racial epithet spray-painted on the walls. He sometimes received threatening, racist letters.

Russell was adored by fans during home games, but he said that afterward some would verbally abuse him. In his 1979 memoir, “Second Wind,’’ Russell famously called Boston “a flea market of racism.’’

“He had animosities toward Boston, as most people know,’’ said Tom Heinsohn, another of Russell’s former teammates. “And they were well-founded animosities, I might add.’’

So for Russell, the idea of attending a ceremony that would focus on the good times and gloss over the uncomfortable ones could misrepresent an uneven relationship. He didn’t want to be a part of it, his former teammates said.

Over the course of nearly three seasons after his retirement Russell returned to Boston for just one Celtics game, and that was because Auerbach had asked him to be his guest. 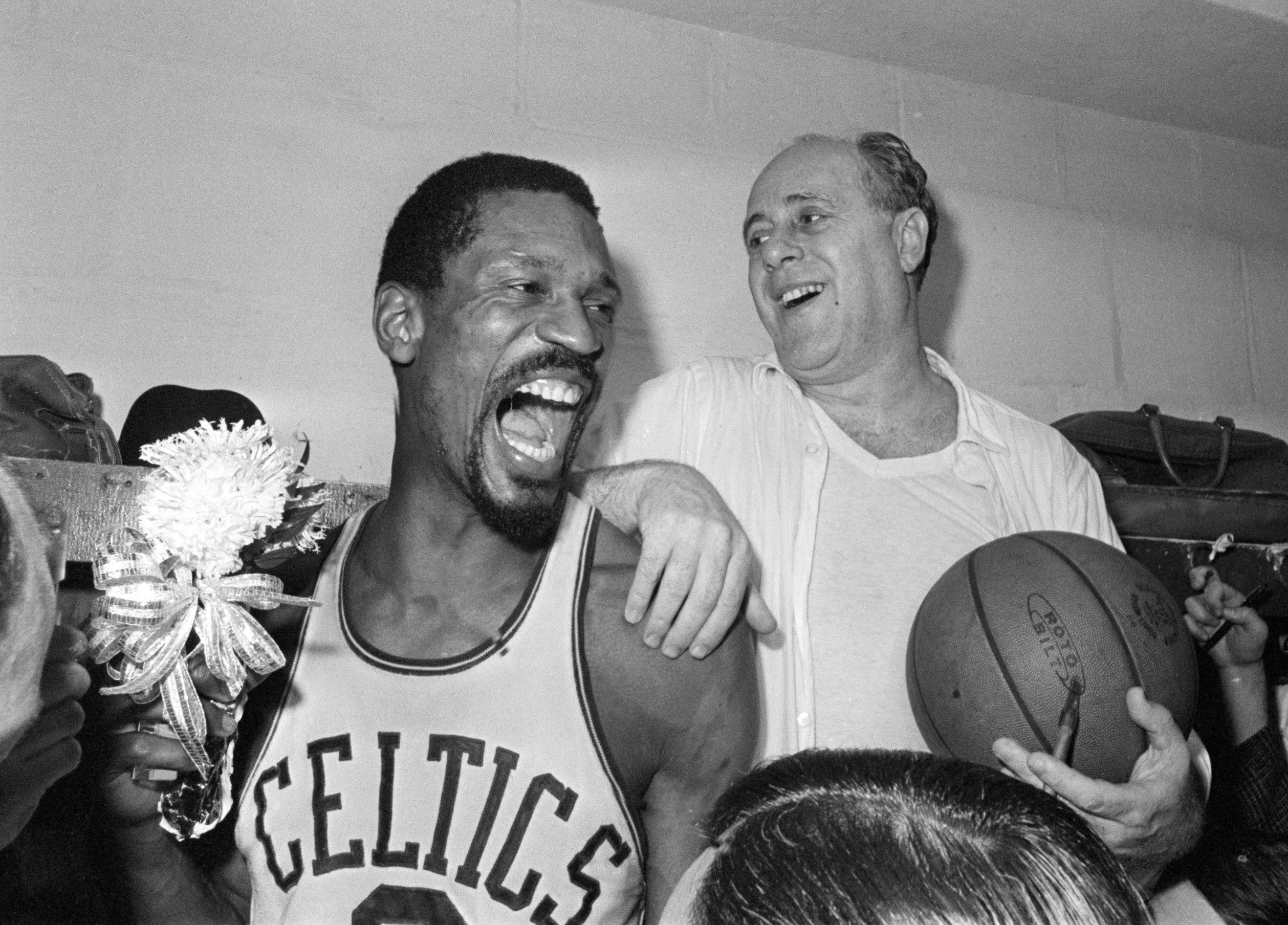 Bill Russell and Red Auerbach after the Celtics defeated the Lakers in 1966 to win the NBA title.

But Auerbach was stubborn, and he knew what Russell had meant to the franchise. So as time passed, Auerbach decided he would honor Russell whether the towering center agreed to take part or not.

Auerbach knew he could not convince Russell to travel to Boston to be honored, but he also knew that when Russell was working for ABC as a commentator in 1972, he would almost certainly end up in town to cover a game.

“Red knows how I feel about this,’’ Russell said that year. “I’m not that type of guy.’’

A plan is hatched

On March 12, 1972, Russell was scheduled to return to Boston Garden for just the second time since his retirement, helping call the Celtics’ game against the Knicks on a Sunday afternoon.

Auerbach knew of the arrival in advance, and he sensed opportunity. Despite Russell’s consistent protestation, Auerbach scheduled a number retirement ceremony and invited Russell’s family.

Longtime Globe sportswriter Bud Collins contacted Auerbach for a story about the event — while Auerbach was on a giraffe safari in Urbana, Ill. — and asked about Russell’s reluctance.

“We’re gonna go through with it anyway, but I don’t know what that crazy [expletive] will do when it happens,’’ Auerbach said at the time. “Sunday we’re gonna raise that flag with his number on it. His kids and I are gonna do it if Russ won’t, and that’s that.’’

Auerbach had Russell’s No. 6 stitched in green cloth onto a white banner, and he waited. In the days leading up to the game, it was widely believed that the ceremony would be held at halftime. That Sunday, the Globe reported that it would take place during an intermission.

While Russell could not stop Auerbach from raising his number, he still pressed to ensure that the moment was on his terms. Auerbach ultimately agreed to hold the ceremony before fans were allowed to enter Boston Garden. An arena that had rattled and shook during Russell’s heyday would be mostly cavernous when his career was remembered there.

“The only way he was going to participate would be if it was before the game,’’ Heinsohn said. “He respected his teammates, and that’s why he did it the way he did it. He considered the Celtics his family, so he wasn’t totally averse to them doing it. But he didn’t want it to happen in front of the fans.’’

Bob Ryan, who was then the Globe’s 26-year-old Celtics beat writer, does not recall receiving much warning, if any, that Russell’s moment would take place more than an hour before tipoff.

“I didn’t get there early specifically for the event,’’ Ryan said. “I’m certain I didn’t. My M.O. would be to get there 2½ hours early in those days, and so I would be there anyway. But my best recollection is that it was just another Sunday for me. I just happened to be there for it.’’

In his story in the following day’s Globe, Ryan reported that the only people near the court for the ceremony were some of Russell’s former teammates, and a handful of writers, ushers, vendors, and ABC workers. There were also some players shooting baskets to warm up.

The Celtics who had not played with Russell were not part of the number retirement.

“I wasn’t involved in it,’’ said Dave Cowens, who was then in just his second pro season. “I didn’t know Bill well.’’

Photographs of the event are scarce. In one, Russell is joined only by Auerbach and former teammates Heinsohn, Sanders, John Havlicek, Don Nelson, and Don Chaney.

Chaney was one of the few who had established a bond with Russell. Both were from Louisiana, and when Chaney was a senior at the University of Houston, Russell had joined Auerbach on a trip there to scout him. When Chaney was a rookie with the Celtics in 1968, Russell took him in for a few weeks while he looked for a home.

“He kind of put his arm around me and helped me adjust,’’ Chaney said. “Russell was the type of guy who didn’t extend himself out to many people. I felt grateful that he reached out to me.’’

The ceremony was held at 12:55 p.m., just five minutes before the Garden was opened to fans. Russell, Auerbach, and Heinsohn — who was then the coach — wore suits, and the others were in their Celtics uniforms. The Garden seats were unoccupied.

Sanders said he remembered missing the beginning of the gathering, although he could not remember why. Ryan said he didn’t think the team’s longtime organist, John Kiley, played while the banner was raised. Heinsohn said he didn’t recall a speech. The whole program was simple, if not hasty.

“There was solitude with not that many people around,’’ Havlicek said. “We were able to reflect on each other and look Bill in the eye and say, ‘Great job. We’re proud of you.’ ’’

Russell’s No. 6 occupied the eighth and final spot on the banner, sitting in the bottom right square. It was raised to the rafters, and then the gates were opened.

“I can remember just really being appreciative of the fact that I was there to witness it,’’ Chaney said. “The thing about Russell you’ve got to understand is he’s that type of guy. He’s a little different from other people. He wanted to go out quietly.’’ 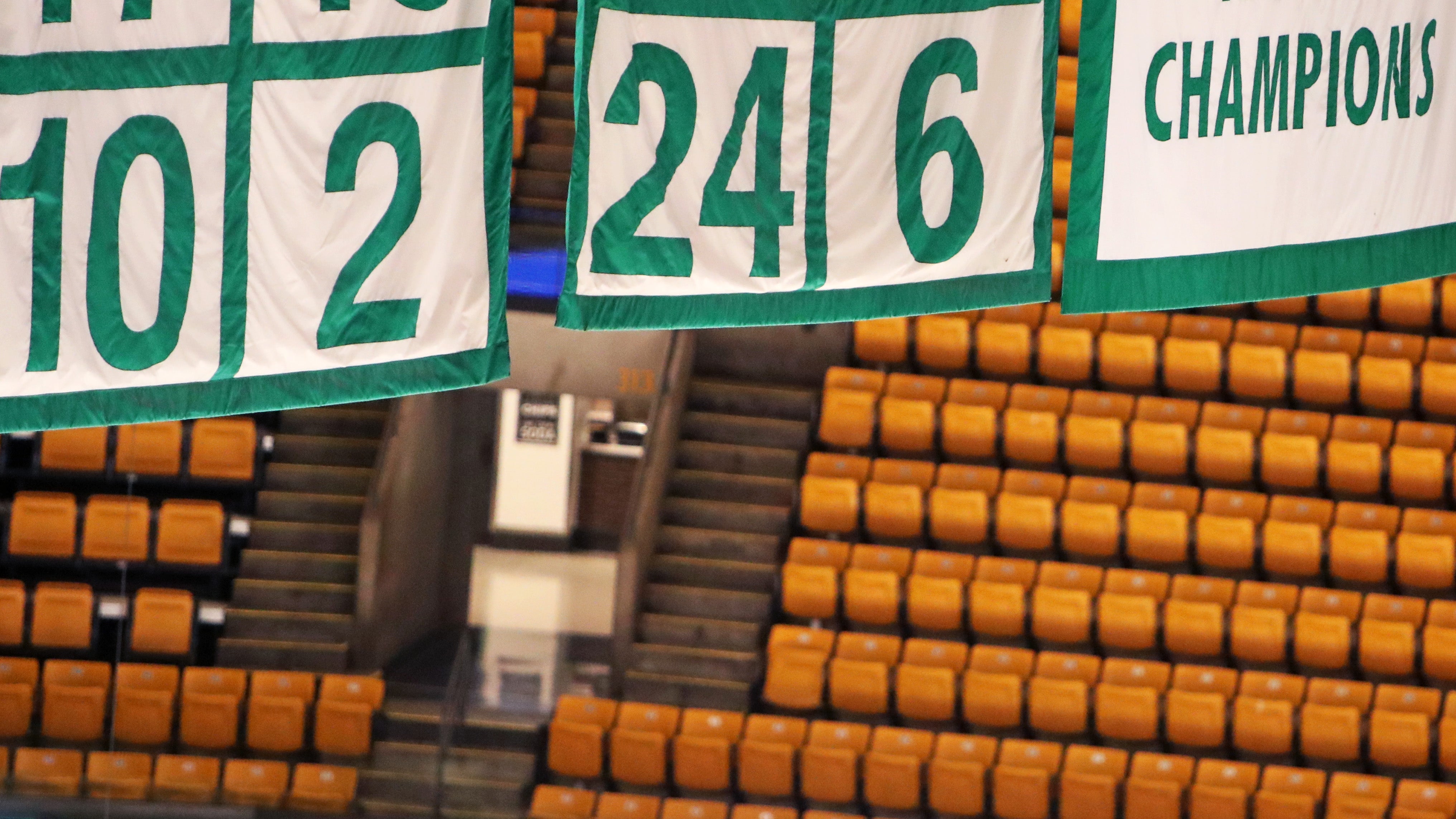 Russell’s number is one of 21 retired by the Celtics and hanging from the ceiling at TD Garden.

By the time fans filed into the Garden for the Celtics’ game against the Knicks that Sunday, the number of one of the greatest basketball players of all time had already been retired and hoisted. If fans weren’t looking for it, they probably wouldn’t have known it was there.

That day, Russell was asked by reporters why he had chosen to privatize a feel-good moment that so many others prefer to make public.

Russell settled into his seat behind the scorer’s table and broadcast the game for ABC. During a break in play, some fans gave him a standing ovation. It’s unclear whether or not they were prompted.

A photo in the Globe the next day showed Russell sitting and smiling as fans stood and applauded him. The photo caption stated that “Russell sat quietly at his ABC television table [and] did not respond to cheers.’’

It turned into an eventful afternoon. In the second quarter, Havlicek hit a turnaround jump shot that broke Bob Cousy’s all-time Celtics scoring record. He was given the game ball during a stoppage of play.

Then near the end of Boston’s 112-109 win, the team thought veteran timekeeper Tony Nota made an error when he stopped the clock with one second left after a foul. Auerbach angrily confronted Nota in front of fans and the media and told him he was fired, although some believed it was temporary. The game ended and fans shuffled out, and Boston Garden was empty and dark once more.

A change of heart

Through a spokesperson Russell “respectfully declined’’ comment for this story. The 83-year-old rarely gives interviews and has lived most of his post-basketball life outside the public eye.

His uneasiness about being honored was not restricted to that Sunday at the Garden in 1972. Three years later he declined to attend his Hall of Fame induction ceremony in Springfield, and it was widely believed that his reasoning remained the same.

But his hardline stance softened over the years, even if only slightly. Russell agreed to have his number rededicated at the FleetCenter celebration in 1999 because the proceeds from the event would go to the National Mentoring Partnership, a group that creates and strengthens mentoring relationships for youths.

“Things change, times change, guys become more mellow,’’ Sanders said. “Issues that were huge at another time, you put them in a particular perspective.’’

In 2013, a statue of Russell was installed at Boston’s City Hall Plaza. Russell attended the unveiling on a drizzly afternoon, and then the group relocated to a nearby ballroom, where Russell, in a rare occurrence, gave a speech. He said how he was initially reluctant to have a statue, because it reminded him of a tomb and was an easy target for pigeons. But he also used the moment to look back at his momentous career, which is probably all Auerbach ever wanted on that March afternoon 45 years ago. 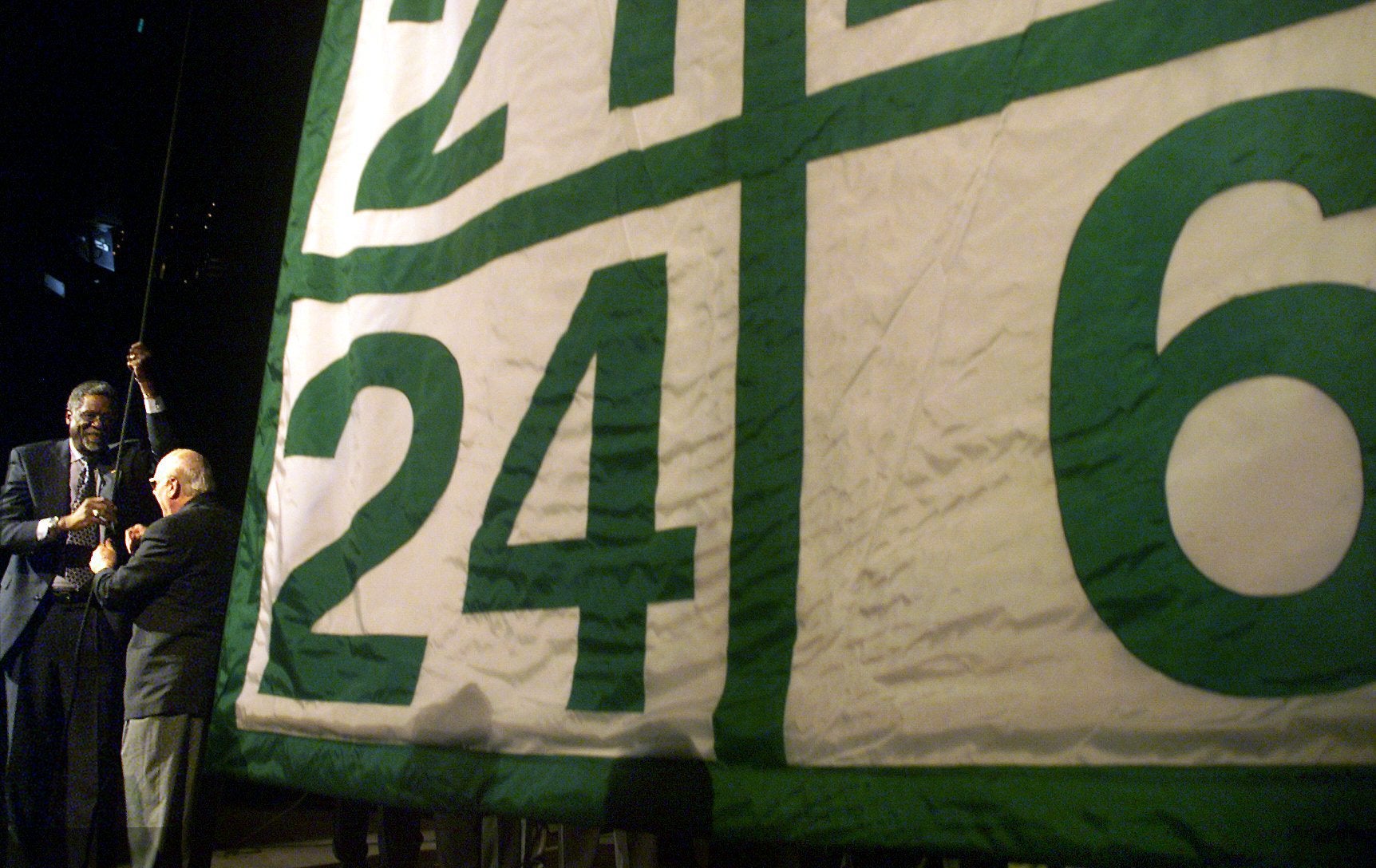 Bill Russell and Red Auerbach participated in a second jersey number-raising ceremony in 1999.

What NFL experts are saying about Thursday's Patriots-Bills game