After a crazy offseason that left the Celtics with just four returning players, the NBA tip-off game is finally here.

“A lot of things happened this summer, lot of buildup, I’m just ready to get to the games,” newcomer Gordon Hayward said ahead of opening night.

Between all the practices and workouts (oh, and an undefeated preseason), the Celtics stayed busy with other endeavors, too. Here’s what the projected starting five has been up to since last season came to an end in late May:

After a chaotic Fourth of July that was marked by both confirmed and denied reports that he would be coming to Boston, Hayward announced his decision to become a Celtic via an essay in the Players’ Tribune.

Just three days after making his highly anticipated decision, the 27-year-old was spotted getting a haircut and beard trim at Boston Barber & Tattoo Co. in the North End. According to barber Roy Rodriguez, Hayward requested the Pompadour, which is a slicked-back style with volume in the front and tapered, well-blended sides.

Appreciate the hospitality from the people of Boston already. Excited to be here! Thanks for cut @bostonbarbertattooco @rizthabarber

It took the Indiana native just that one night to sense the city’s energy.

“I could feel it then, though — the intensity,” Hayward told Adrian Wojnarowski. “We almost just like had a night in the heart of Boston. … We kind of just jumped in and you could feel just everybody was excited.”

Hayward and his wife, Robyn, have since been continuing to get settled in Boston with their two daughters, Charlie and Bernie. According to Robyn’s Instagram, they’ve even found a new favorite restaurant: Strega.

It’s safe to say that @streganorthend is our family’s favorite restaurant ( & @stregawaterfront ) Bernie & Charlie are full and happy! (Bernie saw a fire truck so she couldn’t smile). And we are so grateful for their wonderful hospitality!❤️

Hayward also returned to Fenway Park — where the Celtics had taken him as part of their courting process — and was invited to throw out the first pitch for a regular-season contest between the Astros and the Red Sox. The two teams would go on to face each other in the ALDS, and Hayward wished the Sox good luck ahead of their series.

‪Thanks @RedSox for having me out to throw out the first pitch last night. Excited to watch you guys this postseason!‬

As for whether the longtime Colts fan has come around on the Patriots? That’s still to be determined, but head coach Brad Stevens warned his former player that conversion to Pats fandom is likely inevitable. In fact, Stevens connected Hayward with Peyton Manning’s arch rival: Tom Brady.

“I made sure that he knew, ‘By the time you get here, I give you about four weeks before you’re a huge Tom Brady fan,'” Stevens said during a visit at Gillette Stadium. “Obviously when you’re here and you’re around the Patriots and around Tom and really around that whole organization, it’s so impressive.”

Hayward, of course, wove a fair share of basketball into his schedule, including a visit to his former stomping grounds at Butler: Hinkle Fieldhouse.

Only right to get a workout in back at Hinkle with @gordonhayward before season starts up. pic.twitter.com/48gBB2c0Al

One thing he might want to work on, however, is his driving. Hayward preemptively apologized to Bostonians for his poor navigation skills. Then again, head coach Brad Stevens may not have set the best example. While driving from the airport to the hotel during his visit to Boston, Stevens apparently “got lost a couple times along the way.”

Gordon Hayward, new Boston driver: “I’m making a lot of U-turns right now. I apologize to everyone who’s probably honking their horns at me”

Horford and Hayward joined a number of local celebrities at Spaulding Rehabilitation Hospital for the movie premiere of Stronger, which details the story of Boston Marathon bombing survivor Jeff Bauman. Horford attended the even with his wife, former Miss Universe Amelia Vega. 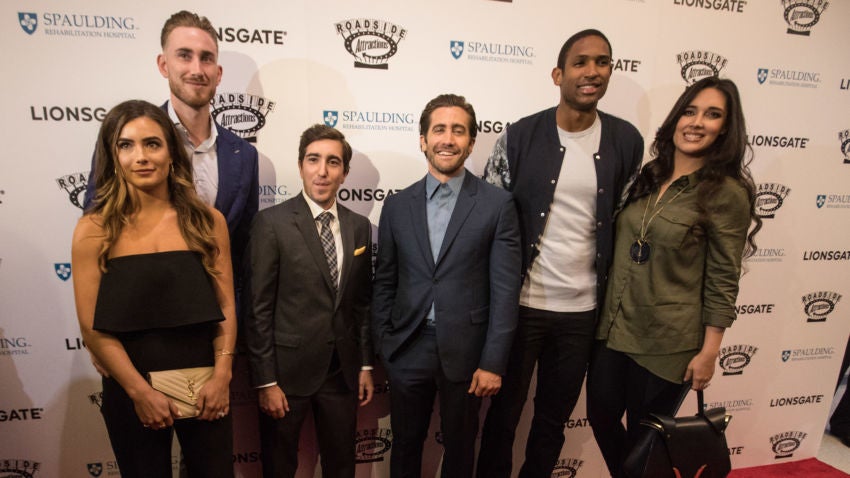 During the Celtics’ time off, the couple enjoyed their spending time with their son, Ean, and daughter, Alía. Their family traveled to an undisclosed tropical island in June, as chronicled by Vega’s Instagram.

Horford also shared photos of one the days they spent exploring Boston that featured a trip to the Massachusetts State House and Ernesto’s pizza in the North End.

According to his Twitter account, the center followed a lot of sports during his time off, including Chile versus Portugal in the Confederations Cup, Wimbledon, and the Floyd Mayerweather-Conor McGregor fight. He also watched, from afar, his alma mater’s football team, the Florida Gators, take on Tennessee in a closely contested SEC matchup.

Much of Brown’s offseason has been documented by his YouTube series: “Hone the Pressure, It Makes Diamonds.” The six episodes focus on how Brown is working to transition from “the kid with potential” to “the kid in the now” through training on and off the court. Filmed by Harú, the videos show Brown developing his ball handling skills, stepping through agility ladders, and trying water aerobics, amongst other things. A few of his teammates, including Guerschon Yabusele and Terry Rozier, also make cameos.

The 20-year-old logged a significant amount of official court time with fellow NBA players, too. After a tantalizing rookie campaign, Brown specifically requested to be a part of the Celtics Summer League squad in an effort to “show people improvement.” While at one of the tournament sites, Las Vegas, he hosted a ‘Welcome to the NBA Night‘ for those under the age of 21.

“The purpose of the event was just to bring some young guys together with some of the people that the NBA partners with, some people that represent the NBA, the Players’ Association, and some of the older guys that played in the league,” Brown said on his YouTube channel. “Just to put them all in the same place, network, and in a sense, help their transition in the league because now they’re just building a Rolodex of resources.”

“For me, I was looking at it like I’m not 21, and most of the incoming rookies aren’t 21,” he continued. “I can’t stand Vegas, just going to Vegas and having nothing to do.”

Following Summer League play, where Brown averaged a double-double in Utah, the forward was one of 22 players invited to Johannesburg for the NBA Africa game. Organized to support UNICEF, the Nelson Mandela Foundation, and SOS Children’s Villages South Africa, the contest was between Team Africa—comprised of second-generation African players as well as those who were born in Africa—and Team World.

Brown, who was he youngest competitor and a member of Team World, said in a conference call that he “couldn’t stop smiling” upon arriving at the airport.

“I was just waving at people excessively,” he said. “So I probably came off probably a little but weird to some of the customs people, but I was happy to be here.”

His 15-point performance was punctuated by a windmill slam dunk in the closing seconds of the game.

Jaylen Brown closed out the 2017 #NBAAfricaGame with a windmill slam ?️ pic.twitter.com/dTAw9jH4kR

The jam was somewhat reminiscent of his rendition of summer’s trending drive-by dunk challenge.

In the final weeks before the start of preseason, Brown stopped by Chestnut Hill’s Alumni Stadium to watch Boston College football take on Notre Dame.

The third-overall pick in the NBA Draft, Tatum got one of his first tastes of the TD Garden while at a Weeknd concert, as part of the artist’s Star Boy tour. The rookie attended the concert with Brown, a teammate who he has forged a solid friendship with since joining the Celtics. The 19-year-old attended Brown’s “Welcome to the NBA Night” during Summer League play, and for awhile, the pair even had a nickname, 7/11, before Tatum switched his number to 0.

The forward, who is expected to start in the Celtics’ season opener against the Cavaliers, had an impressive Summer League showing and averaged 18.2 points over the two weeks. Stevens was also “really encouraged by his defensive play” and is hopeful that it will only improve.

“That’s something with his length, and ultimately as he builds more strength, that should be a positive going forward,” the head coach said.

He and Brown also faced off in a post-practice three-point duel, where Tatum fired off 10 consecutive buckets.

Aside from making a number of appearances with his rookie class, the youngster also visited Fenway Park to throw out the first pitch before a Red Sox-Rays game.

Earlier in the summer, Tatum had met retired slugger David Ortiz in Las Vegas. Both shared photos of the meeting on Instagram, with Ortiz captioning his post: ““Next season is going to be super fun having this kid playing for us…… Jayson Tatum I have the honor to meet him and his mom last night good luck kid and let go celtics.”

After a blockbuster trade between the Celtics and the Cavaliers, Irving arrived in Boston at the beginning of September. And according to Reggie Miller, the guard found out about the trade while filming for his upcoming movie Uncle Drew. Miller, one of Irving’s cast mates, recounted the story to SLAM online:

“We’re on this small van getting ready to shoot a scene and all of our phones ding at the same time, except for Kyrie’s. He didn’t have his phone. And we looked at our phones, and C-Webb, he looked at us like, ‘Kyrie Irving’s been traded to Boston, right?’ And we’re looking at one another like, ‘Should we tell him?’

Obviously we had to tell him because he was like right in front of us. So we all showed him the phone. It was so funny, his expression. He looked at it and was like, ‘Huh. OK, let’s do this.’ And that’s how we all found out that he had been traded to the Boston Celtics.”

In Irving’s new film, his alter ego — a septuagenarian with under-the-radar basketball skills — goes on a road trip to collect a group of friends to compete with him in a tournament hosted at Harlem’s Rucker Park. It stars a number of other basketball players, including Miller, Chris Webber, Shaquille O’Neal, Nate Robinson, and Lisa Leslie.

Exclusive first look: Kyrie Irving and the cast of the upcoming @UncleDrewFilm.

Can you name all the NBA stars? pic.twitter.com/WkTvas81il

While shooting, the 25-year-old flashed his pop-a-shot skill on set.

Perhaps the most important revelation of the offseason, however, is that Irving disclosed that he does not actually believe the world is flat. His beliefs were apparently just a way to troll the media. Irving told Toucher & Rich:

All I want to do is be able to have that open conversation. It was all an exploitation tactic. It literally spun the world — your guy’s world — it spun it into a frenzy and proved exactly what I thought it would do in terms of how all this works. It created a division, or, literally stand up there and let all these people threw tomatoes at me, or have somebody think I’m somehow a different intellectual person because I believe that the earth is flat and you think the world is round. It created exactly that. It did exactly that. 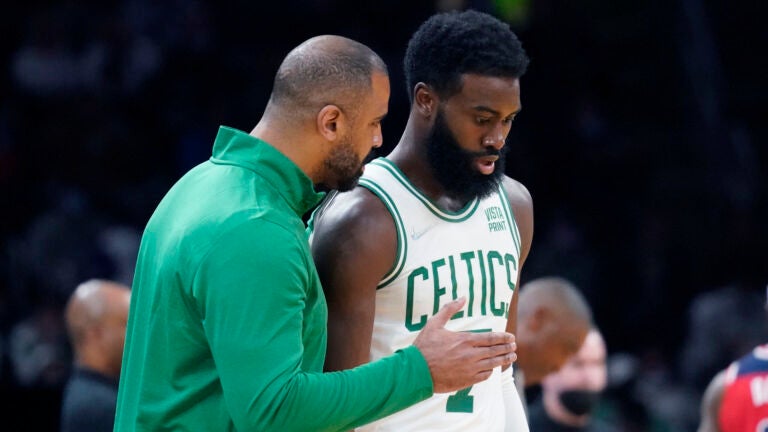