The Preseason Celtics have shown us one thing above all else: They will be a LOT of fun to watch offensively. They have shown a level of skill that will lead to a number of open looks for a lot of guys with the ability to put the ball in the basket.

Whether that translates to 50-plus wins is yet to be seen, but the Celtics’ read-and-react motion offense is built for intelligent, skilled players to make decisions which put defenders at a disadvantage. The football adage “you can only cover a guy for so long” translates to the NBA as well. Defenses can only rotate and switch for so long before a seam opens up for an offensive player to find a shot.

Here’s one play which highlights this. There’s no magic to it. The beauty is in its simplicity. Guys are in positions to make simple plays by reading defenses, moving on to the next option, and further breaking things down until a good shot presents itself.

First, the play in its totality: 10 seconds, three passes, one made three. But there were two options before that shot, and another two options should Marcus Smart have decided to do something else. 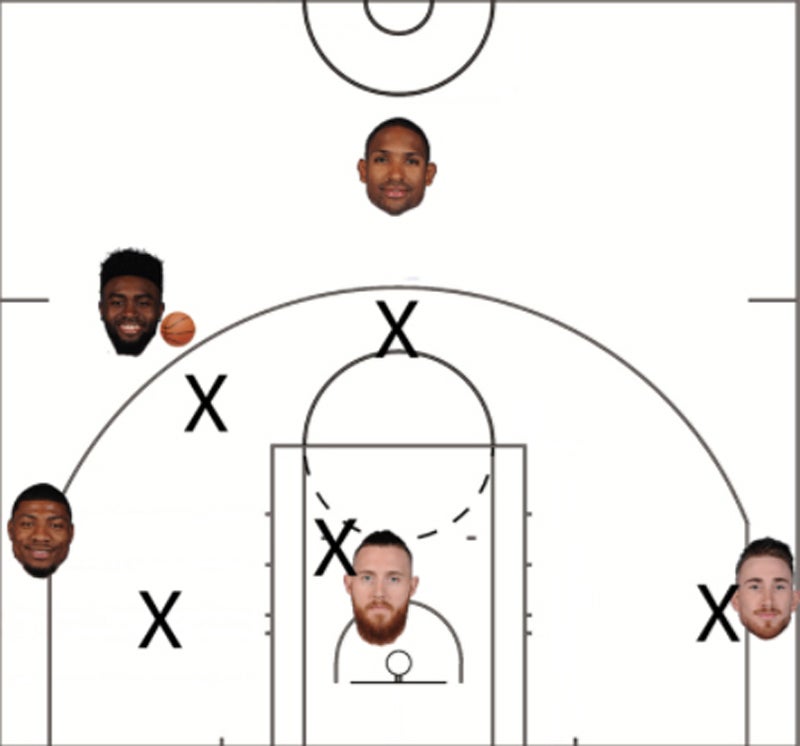 Marcus Smart brings the ball up and hands it off to Jaylen Brown before settling in the corner. Gordon Hayward plants roots in the other corner. He will not move this entire sequence, but if you watch his defender, you’ll see why. Because the ball is kept at the top of the key the entire play, Hayward is always one pass away, and must always be defended. This allows the Celtics to basically use two-thirds of the floor to play four-on-four.

Jaylen quickly gets the ball to Al Horford and we’re off to the races.

After passing to Horford the first option is a simple back pick on Brown’s man. Brown uses it and turns the corner. 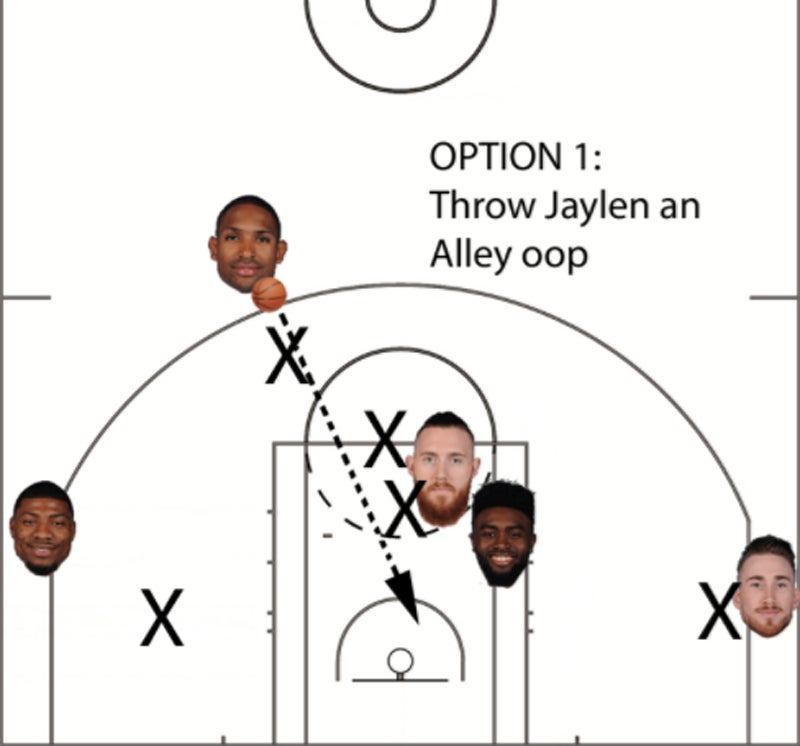 If Horford wanted to throw the alley oop, the super-athletic Brown probably could have gone to get it. Look how much room there is coming off the pick. 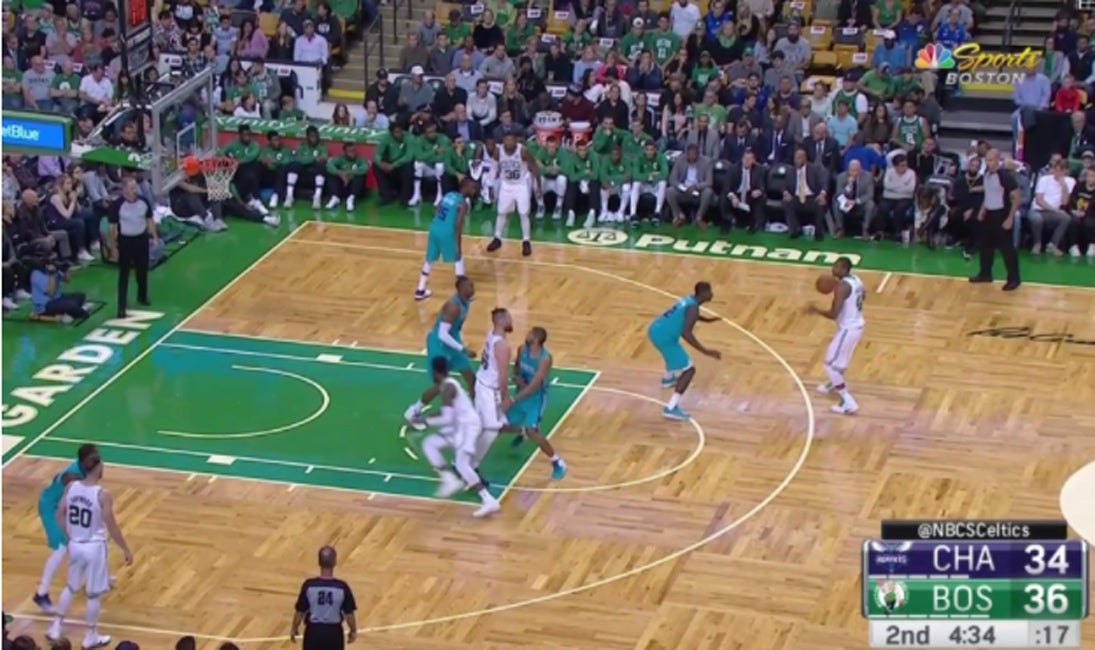 Dwight Howard is backpedaling, so he’s off balance and unlikely to get high enough to challenge it. But, since this is preseason, the Celtics probably want to run through certain options and get a pre-determined result. Much like a Chris Sale working on a certain pitch in spring training, the Celtics are honing the timing of plays. When the season begins, once you see Brown flip the ball to Horford, immediately watch for an alley oop.

But since they didn’t, let’s press forward. 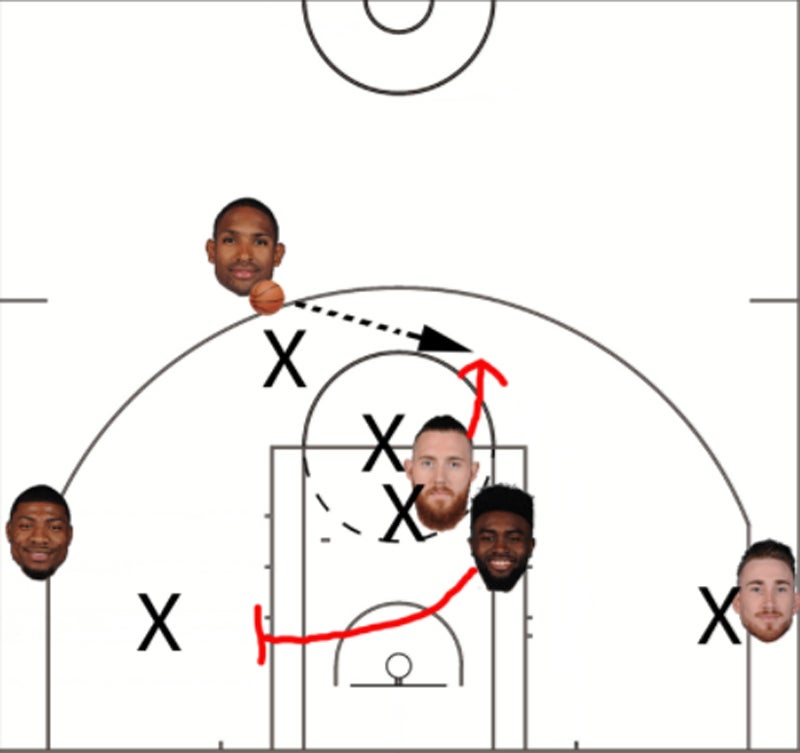 Brown quickly goes from scoring option to screener. The ball is flipped to Baynes for two reasons. First, he has a better passing angle that, from that spot on the floor, still forces Hayward’s defender to stay close. If the Smart/Brown pick works out, Baynes can make that pass with plenty of room.  Secondly, Al Horford needs to be free for the next step. For now though, we’re focused on Baynes with the ball and Smart’s read. 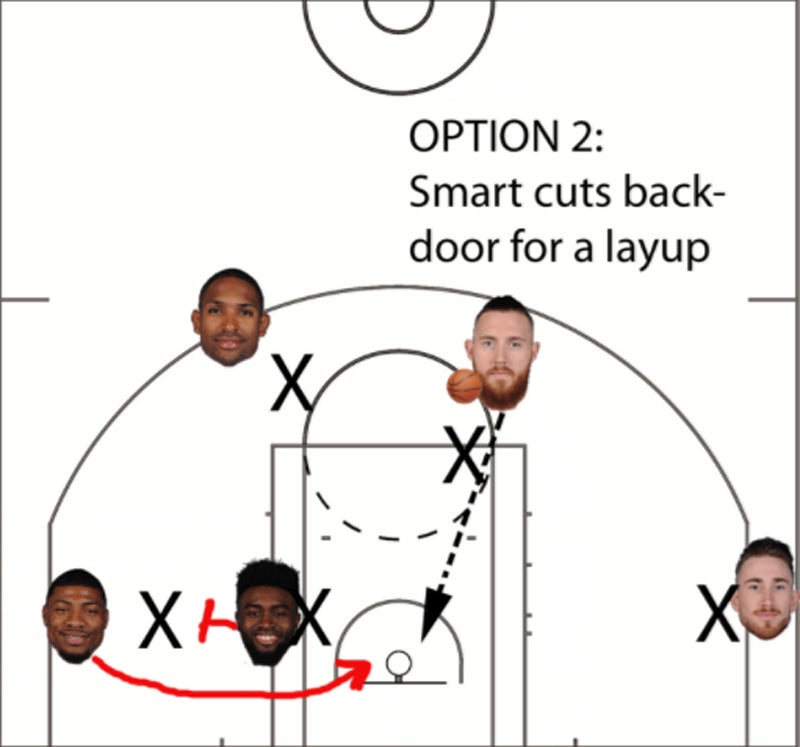 Look at how much room there is in the restricted area: 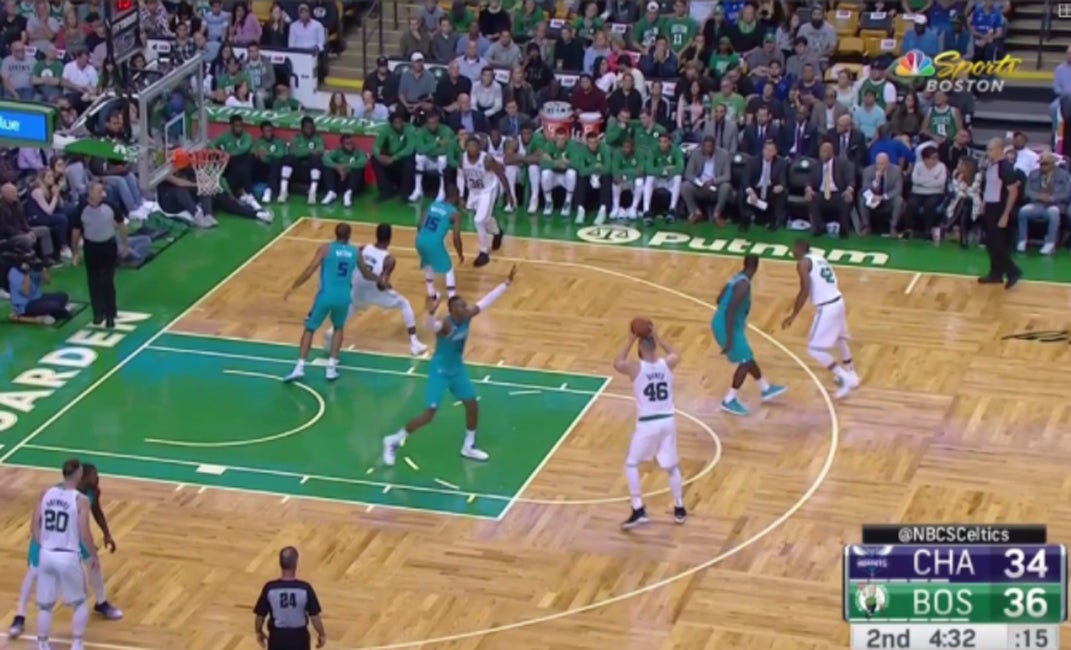 Remember, Brad Stevens and the Celtics are running a read-and-react motion offense. If Jaylen’s defender was positioned differently, Smart would have read the play and cut backdoor. But since that defender is positioned closer to the baseline, the Hornets can just switch and blow everything up. If the defender was on Brown’s right hip, we’d probably see a layup.

So Smart’s read is to use the other pick coming down from Horford.

Option 3: Pop up for three 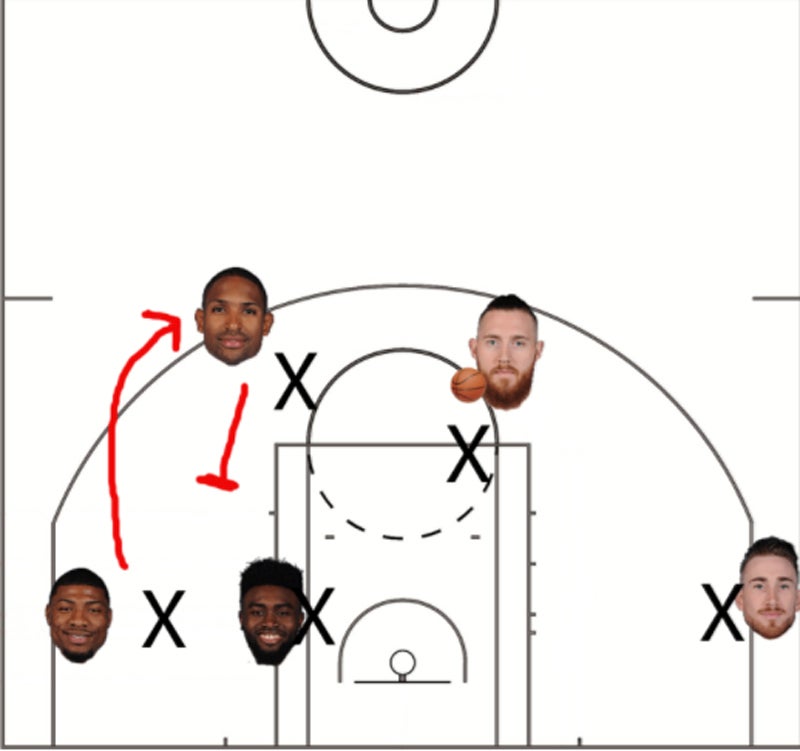 Smart’s defender takes a bad path and runs squarely into Horford. That’s all the time Smart needs to get a shot off. 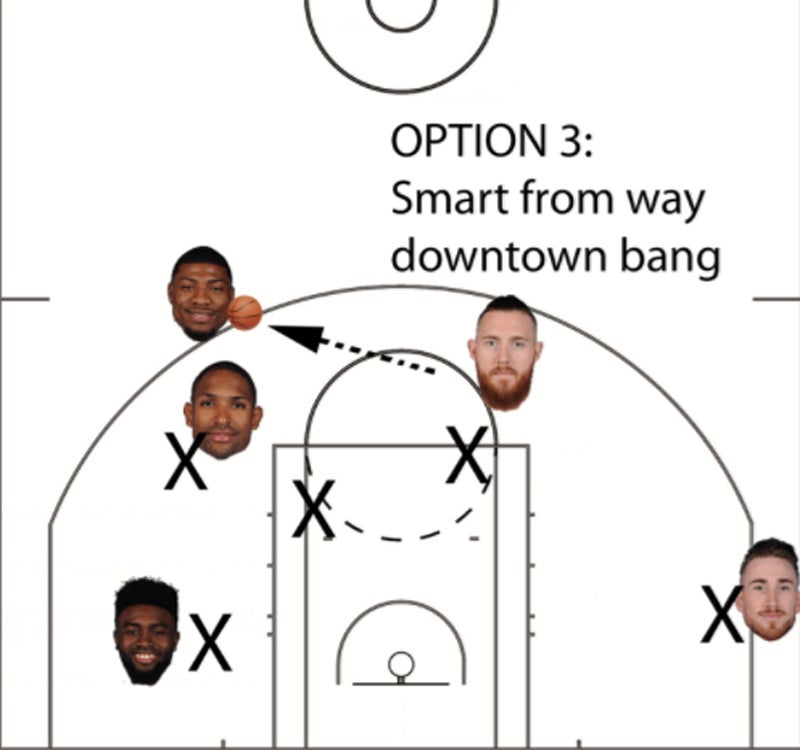 Smart’s three-point shooting has been pretty good this preseason so he’s confident taking this shot. Think about the Celtics running this play with Kyrie Irving, or planting a different shooter in the corner and running it with Hayward.

But just because this ended with a made three, it doesn’t mean that’s where the options end. If Smart’s defender took a different path there are two other choices for the Celtics.

Here’s how the floor looked when Smart rose up: 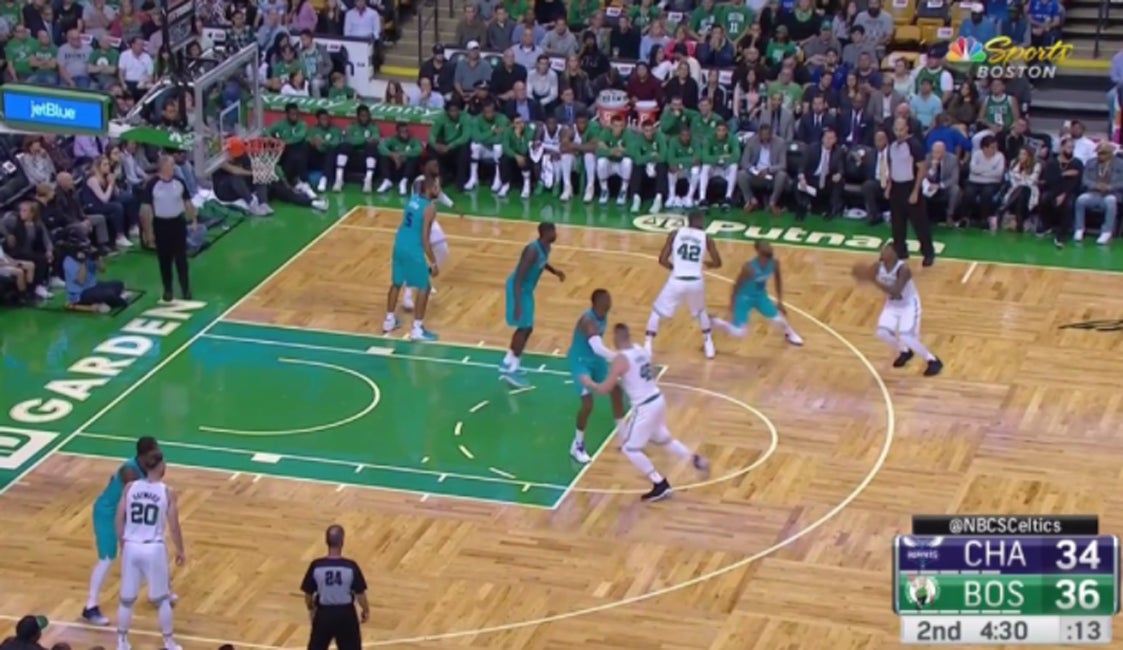 Smart has the ball and Horford is right there. If Horford reads Smart is continuing the play, he will turn right around and set another pick for Smart. Brown will clear out to the corner and Baynes will clear out to Hayward’s side to set a pick there. 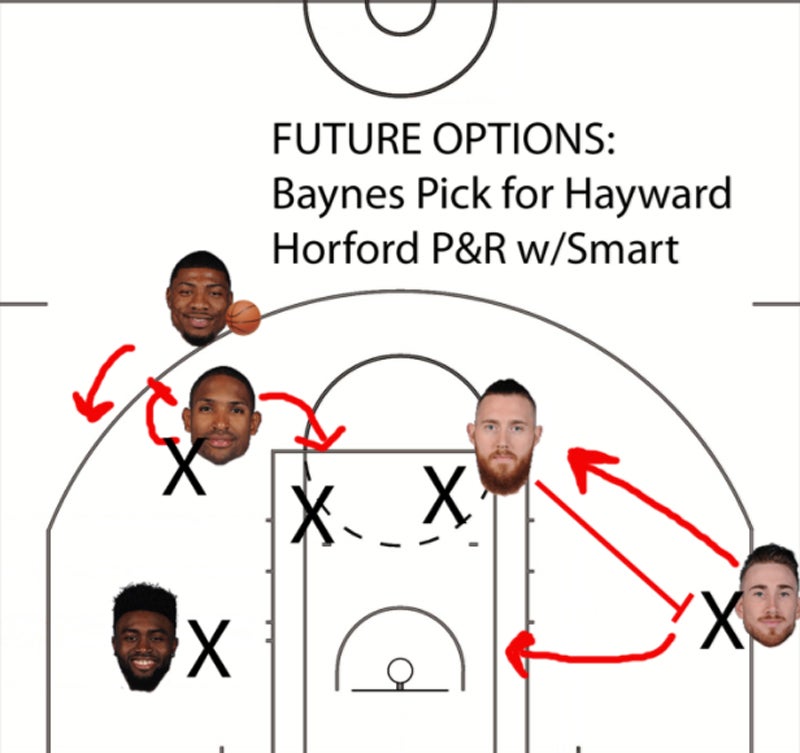 Smart now has options to drive. He can go right, draw a defender and kick to Jaylen Brown for a three. He can go left and drive the lane and either find Hayward coming off the Baynes pick for a three or backdoor for a layup. Baynes can roll off the pick and go towards the basket for a pass or offensive rebound attempt. Horford can pop after the pick and Smart could find him for a three. Horford could also roll and Smart can find him for a layup attempt. Of course, Smart can use his newfound skinny-ness to dance his way to the hoop.

So while options four and five are simply “Horford picks for Smart” and “Baynes picks for Hayward,” the read-and-reactions give the Celtics seven more potential ways to score depending on how the defense is playing each action.

A defense that has to keep guessing is a defense that will eventually guess wrong. The Celtics have a bunch of high-IQ guys who are all capable of making the right reads and reacting properly. Little nuances, like keeping a dangerous guy like Hayward off in the corner until he’s ready to strike, help open up numerous options.

This is just one play, but you can see how the Celtics will flow off each other throughout each action. Each different play has its own tentacles with different options playing out similarly. When it all works, you will watch a fluid symphony of passing in an offense that promises to be wildly entertaining this season.