On Jan. 31, with Celtics point guards Kyrie Irving, Marcus Smart, and Shane Larkin all sidelined with injuries, Terry Rozier drew his first career start. Rozier responded by registering his first ever triple-double and leading Boston to a win over the Knicks. Two nights later he poured in a career-high 31 points in a win over the Hawks, and two nights after that he drilled a jump-shot with 14 seconds left that helped send the Celtics to a 1-point win over the Blazers.

On a Celtics team that is somewhat devoid of personality, Rozier’s humor and everyman qualities had already become endearing, particularly to a loyal subset of fans on Twitter and Reddit. Rozier’s representatives at Verus Management had been tracking his popularity on social media channels and seen how even the most basic Rozier-related quips and quotes seemed to resonate, and now this three-game burst had made him a bit more mainstream. It was an opportunity to build his brand.

Sam Packard, a co-host of the LockedOn Celtics podcast, last season gave Rozier the nickname “Tito,’’ and he had no real reason for it.

“Literally, his name began with a T, and he was good,’’ Packard said with a chuckle. “I’ve always been a fan of the nickname ever since Terry Francona.’’

Packard said he’d even briefly tried to convert Tyler Zeller to a Tito during his three-year stint in Boston, but it never stuck. 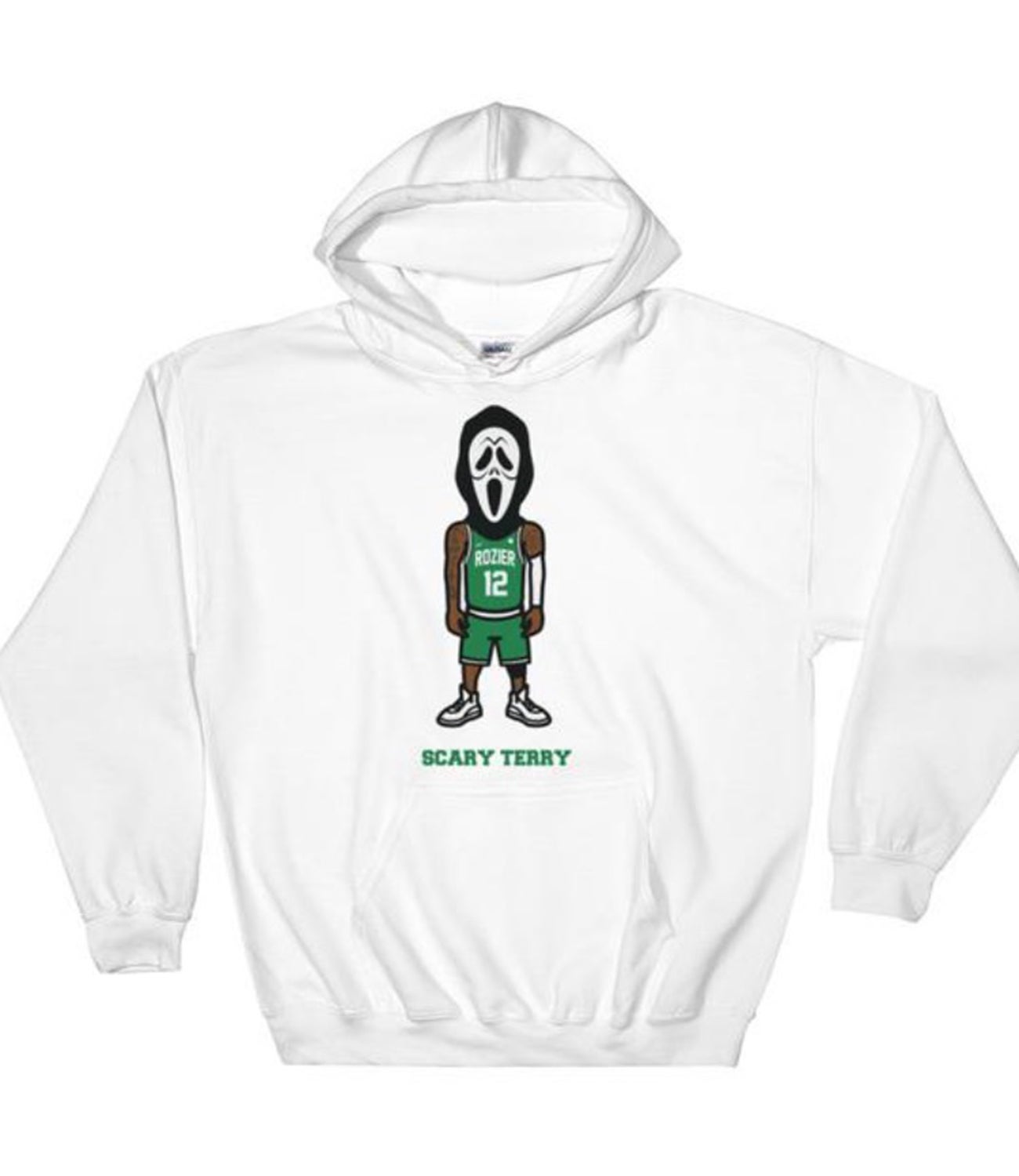 Anyway, Tito Rozier was gaining steam, and those around the point guard could not understand why. They thought that Rozier’s preferred nickname, T-Ro, was simply being lost in translation, because it sort of sounded like Tito. Celtics director of player personnel Austin Ainge even addressed the issue on Twitter, asking fans to correctly say T-Ro, as the guard preferred. And this was the genesis of the first Rozier shirt that was ready for print last month. It was going to say: “T-Ro, not Tito.’’ And maybe fans would buy it and wear it.

But life moves fast in the world of nicknames and Twitter and NBA fickleness, and Rozier’s camp saw hype escalating around a new moniker, “Scary Terry.’’ That is the name of a character on the popular adult Cartoon Network show, “Rick and Morty,’’ and it was attached to Rozier by the Barstool Sports podcaster, Coley Mick.

Mick had a collection of nicknames for Rozier, and when he met the point guard in November, he shared them with him.

“He definitely said he liked ‘Scary Terry’ the most,’’ Mick said. “And I told him he could have it.’’

Still, he thought the nickname sounded cool, and everyone on social media seemed to like it.

So Rozier’s team developed a cartoon version of Rozier wearing a Jason mask from the Friday the 13th movies.

The problem is that Rozier’s favorite horror movie is “Scream.’’ He even got a tattoo of the villain’s mask on his arm last summer. Late after a game one night last month he texted Dave Mariotti, Verus’s director of media marketing, and said he would like them to change Scary Terry’s identity.

“I feel like the scary movies nowadays is not like they used to be,’’ Rozier said. “[The Scream mask] was just my favorite. Then people in Boston started doing the Scary Terry thing, so they started using the Jason mask and I’m like, ‘Nah, we’re using Scream.’ ’’

They made a shirt that displayed a cartoon version of Rozier wearing a Scream mask, and when Rozier posted a picture on Instagram of himself wearing one, Scary Terry-fever hit.

Five hundred sweatshirts and T-shirts were printed. The only real advertising was done by Rozier on social media, and the entire allotment sold out in about two days.

Rozier said there are plans to print more shirts with different graphics and colors. Fans continue to ask him where they can get their Scary Terry keepsakes. Rozier smiles and chuckles as he thinks about how quickly this all took off.

“For sure when the playoffs come I’m going to do some crazy things, make some crazy shirts,’’ he said. “I’m just gonna keep switching it up, because obviously the fans love it, and it looked good.’’

Mariotti said their team will continue to keep tabs on which way the social media wind is blowing, too. It is such a convenient way to crowd source.

“He’s in a great market and has an interesting following,’’ Mariotti said. “He has a great fan base, and it seems like people are gravitating towards things he says and does.’’

Of course, the interest in Rozier has also swelled thanks to his play on the court. He has established an important role for the Celtics this season, and has scored 10 points or more in 14 consecutive games. It is clear he is enjoying himself along the way, too, and Celtics fans are enjoying that.

“I think he just has the most dynamic personality of anyone on the team,’’ Packard said. “He just seems like a real down-to-earth kind of guy who doesn’t really take himself too seriously, and is extremely relatable in that sense.’’

Smart on Tuesday was fined $15,000 by the NBA for criticism of officials following Boston’s 123-120 loss to the Rockets on Saturday. In an interview with the Globe after the game, Smart discussed the challenges of defending Houston star James Harden.

“When you’re playing a guy like that who gets those types of calls, it’s pretty much like you’re playing in foul trouble,’’ Smart said. “You’ve got to play really certain. You have to be really solid. You can’t really play the defense that you want, because you know nine times out of 10 he’s going to get those calls. It doesn’t matter whether your hands are up or not. He still gets them. We saw that here tonight a few times, and we’ve seen that every other game. He has a way of using his hands, grabbing us, pulling us into him and drawing those fouls. He’s been doing it for a long time. He gets the benefit of the doubt.’’

Smart and Jaylen Brown were visibly frustrated by calls that came while they were defending Harden. Smart said it is clear that stars have an extra edge.

“It happens all around the league,’’ Smart said. “You get certain players who get calls that other guys just wouldn’t get. We all know the rule. We all understand it. Superstars are gonna be superstars. We get it. It is what it is. We’ve just got to play.’’