■ Al Horford is now 2-16 against LeBron James in the postseason.

I point this out not to throw a bone to the Average Al nitwits, desperate for a morsel to keep their ridiculous narrative alive during his superb postseason performance. They can find their own morsels. I’m done feeding the trolls.

I point it out because head-to-head won-lost records among players of different skill levels and accomplishment is a ridiculously misleading statistic, one that should elicit a “huh’’ rather than any sort of conclusion.

Yup, LeBron dominates at the sport of basketball. If Horford were ever perceived a peer in ability to James – and at this point, it’s pretty much only 1993 Michael Jordan who resides in LeBron’s league – such a comparison might mean something.

But Horford is not an NBA superstar, like LeBron. The only superstar he has ever played with is Kyrie Irving, who in his Cavs days also happened to be alongside LeBron in many of those previous 16 victories.

You know what Horford is if you’re paying attention: A versatile, intelligent player, one whose impact is often obvious and sometimes subtle. He’s ideally the third-best player on a championship-level team, but one whose attributes would enhance any roster in the league.

He’s given the Celtics everything they expected when they signed him to a max deal in the summer of 2016. You can have Kevin Love. I’ll take the guy who dropped 20 points on him, dished out 6 assists, and treated the Cavs’ second best player like every defensive concept he’d ever been taught was hilariously wrong.

I wonder who LeBron would prefer as a teammate: Love, or Horford. Al Horford scored and was fouled by Kevin Love on this play in the first quarter Sunday.

■ The unsung hero of Game 1 – actually, he’s pretty well sung at this point, not that he doesn’t deserve verses of praise – was Marcus Morris.

OK, reaching double-digit rebounds isn’t always Horford’s thing. Let’s just say Morris was a little more physical and a little less into distributing the ball – which of course was fine, since he was such a scoring threat.

Morris put together what was probably the key sequence of the game. The Cavs, trailing by 25 at halftime, cut the Celtics’ lead to 14 at the end of the third quarter, and the run that we were anticipating seemed to gain steam.

But Morris put an end to that at the start of the fourth, following up his own miss with a dunk, then hitting a 3 on the next possession. Then Tatum sent the Cavs reeling into a timeout with a crafty drive to cap a 7-0 run and build the lead back to 21. Cavs run, thwarted.

I don’t know about you, but I didn’t like the deal sending Avery Bradley to the Pistons last summer for Morris. Turns out he’s exactly what the Celtics need – a fearless competitor and scorer off the bench who can also capably chase around LeBron.

Like Bradley, who hit the winning shot in the Celtics’ only win over the Cavs in Game 3 of last year’s Eastern Conference finals, he’s already played a major role in stopping Cleveland for at least one night, with the real hope of a few more to come.

■ I suppose the games in Cleveland will be the ultimate test of their basketball maturity. But right now, it sure feels like everyone – especially the national media – should be talking less about how young Jayson Tatum and Jaylen Brown are and more about how talented and productive they are.

Brown was exceptional in Game 1, with a team-high 23 points, 8 rebounds, a steal and a block, both on LeBron. Thirteen of his points and five rebounds came during the first quarter, when the Celtics rocketed out to a lead that would never really be challenged.

As for Tatum, he wasn’t the star of the game this time around, but he did finish with 16 points – almost every one of them stylish – along with 6 rebounds and 3 assists in a team-high 37 minutes.

To think I saw a fellow rookie push him around in summer league, leading me to the conclusion that he probably wouldn’t be more than a helpful bench scorer this season. Little did I know that Donovan Mitchell would do the same to many more experienced players this season.

■ Aron Baynes came off the bench to provide the Celtics with what must be one of the most effective 4-point, 8-rebound performances you’ll ever see.

In his 25 minutes – during which he was plus-17, the best among Celtics reserves – the center that checks in at roughly the size of an Australian ash tree (look it up – it’s a big tree) consistently cleared space for teammates to collect uncontested rebounds.

This is a significant development considering the Celtics had no one to match all of the annoying, valuable dirty work Tristan Thompson provided the Cavs last year. 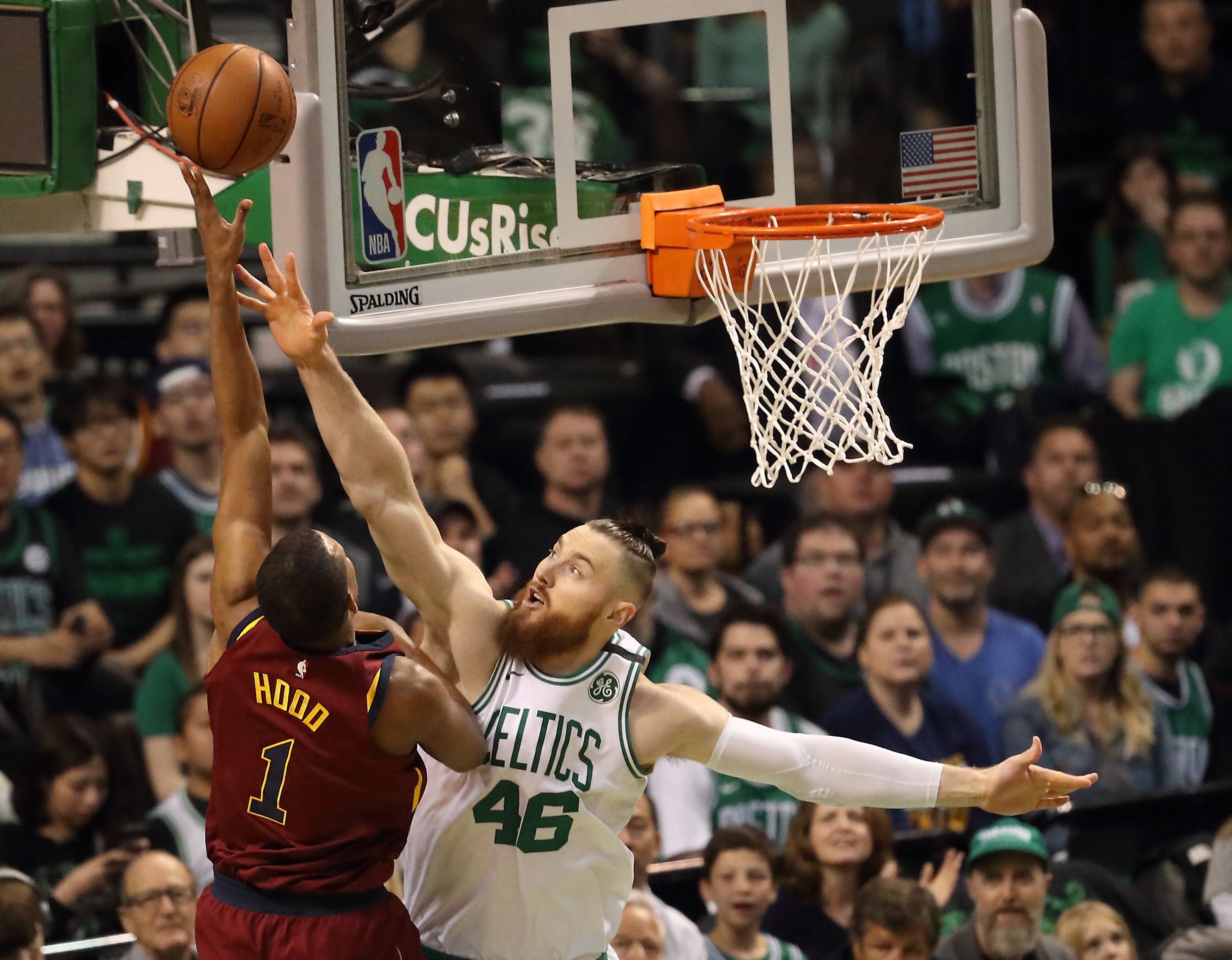 ■ If an NBA observer in possession of a functioning crystal ball told you that the Celtics would have Semi Ojeleye, Guerschon Yabusele, Abdel Nader, and Greg Monroe on the court together for the final 4 minutes and 35 seconds of Game 1, how many points would you have assumed the Cavaliers were leading by?

What if that all-knowing observer (no, it’s not Brad Stevens) told you Nader was running the point?

Just based on the LeBron factor and conventional wisdom of how this series is supposed to go, I’d have guessed Cavs by 25-plus. It was, you may have noticed, not the Cavs by 25-plus.

It was a certain other basketball team that sure seems to believe anything is possible.