The 2018 NBA draft is a bit different for the Celtics than in recent years.

They don’t have a top-six pick, as they have had in three of the previous four drafts, eliminating them from the flurry of trade rumors that come with owning a lottery pick as the draft approaches. Their rebuild has turned into championship contention, as they used those high picks to acquire key core pieces. And they have only one pick this year (27th overall) compared with the 16 picks they made over the last four drafts.

So with that, here is a look at what you need to know leading up to the draft:

8. Cleveland (from Brooklyn via Boston)

20. Minnesota (from Oklahoma City via Utah)

30. Atlanta (from Houston via LA Clippers)

40. Brooklyn (from Los Angeles Lakers via Toronto and Orlando)

41. Orlando (from Charlotte via Phoenix and Memphis)

43. Denver (from LA Clippers via New York and Philadelphia)

46. Houston (from Miami via Memphis)

47. Los Angeles Lakers (from Denver via Chicago and Utah)

54. Dallas (from Portland via Denver)

55. Charlotte (from Cleveland via Brooklyn and Philadelphia)

■  Grayson Allen says he’s ready for the NBA, and the Celtics are taking a look.

■  How the Celtics’ draft prep continued amid a deep playoff run.

■  There’s never a bad time with Deandre Ayton (via SI).

■  Luka Doncic is no Darko Milicic: “Wonder Boy’’ is heading to the NBA, and he’s out to change how we think about European imports (via ESPN).

■  Marvin Bagley III is this draft’s most NBA-ready player (via The Ringer).

■  One-and-done is the right move for Duke’s Wendell Carter Jr. (via The Undefeated).

■  Mo Bamba’s growing case as the best player in this draft (via ESPN).

■  There are 91 early-entry candidates in this draft, 79 from college and 12 international players. Initially, 236 players applied for early entry before 145 withdrew.

■  Barring a trade, this will be the first time in franchise history the Suns make the first pick in the draft. Twice previously the Suns have picked second, getting Armen Gilliam (1987) and Neal Walk (1969).

■  The Kings, picking second, own their highest selection since 1989, when they picked Pervis Ellison first overall.

■  The last time the Grizzlies picked fourth, they drafted Mike Conley in 2007. This will be their highest pick since using the second pick on Hasheem Thabeet in 2009.

■  This marks the first time in more than a decade that the Mavericks have lottery picks in back-to-back drafts; they selected Dennis Smith Jr. ninth overall a year ago,

■  The Clippers have two first-round picks for the first time since 2002, when they drafted Chris Wilcox (eighth) and Melvin Ely (12th).

■  For one high school season (2015-16) at Hillcrest Prep in Arizona, Deandre Ayton and Marvin Bagley III were teammates. Ayton was a junior, Bagley a sophomore.

■  Two-thirds of the second-round selections in 2017 played in at least one NBA game last season. Grizzlies forward/guard Dillon Brooks, who was picked 45th overall, was the only rookie who played all 82 games. 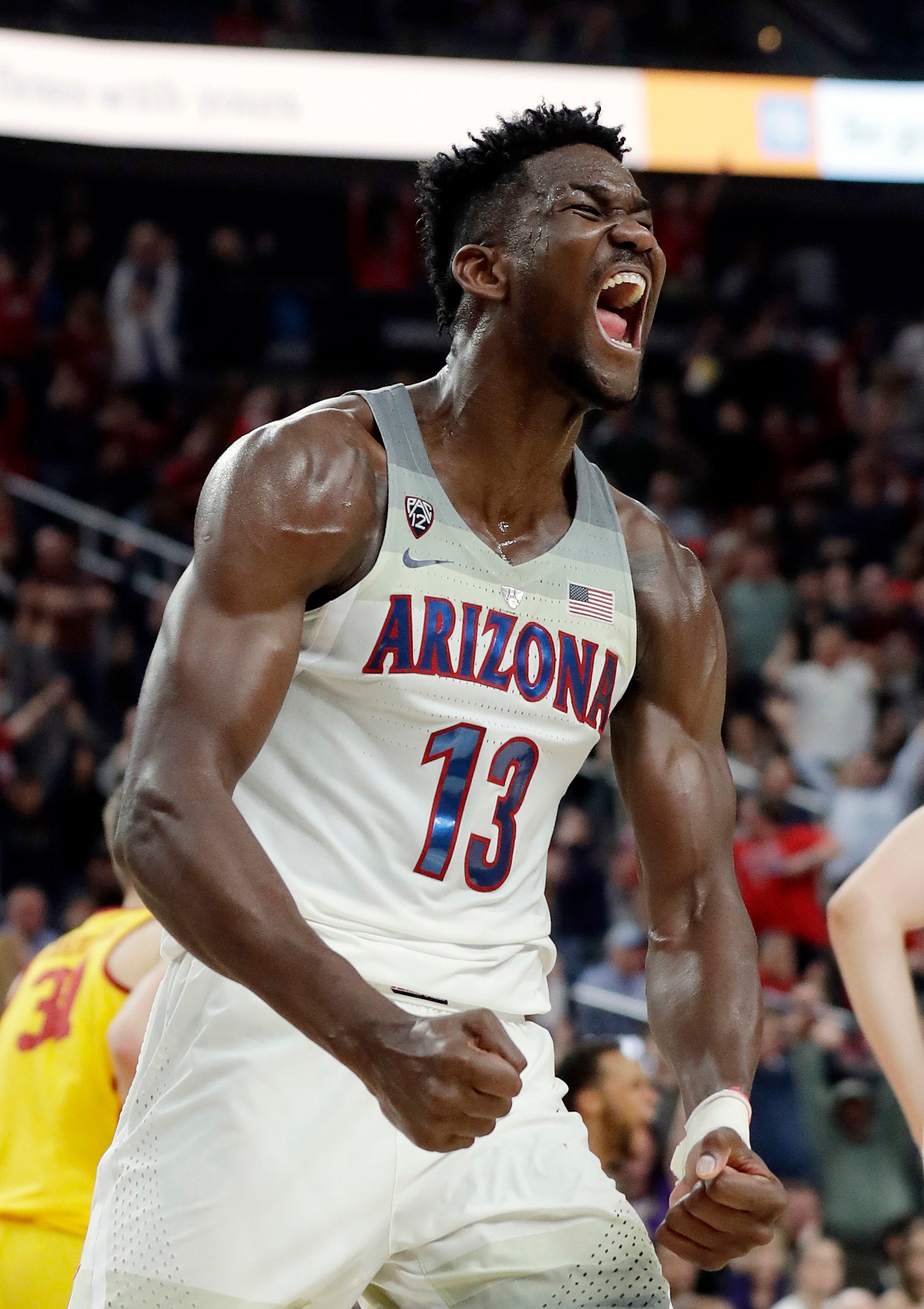 Deandre Ayton, C, Arizona: At 7-1, 243, he is a full-grown adult with an NBA-ready body. His basketball skills just have to catch up to it.

Luka Doncic, SF, Real Madrid (Spain): Who really knows about Europeans? Is he Dirk Nowitzki or Darko Milicic? Whoever takes him is gambling.

Jaren Jackson Jr., PF, Michigan State: His impact for Michigan State was just average, plus he’s a big guy in the wrong era. However, he has skyrocketed toward the top of the first round

Marvin Bagley III, PF, Duke: Great all-around skill at 6-10; not just a dunker. And he’s a smart player, too. It shouldn’t take long for him to be a really good NBA player.

Mohamed Bamba, C, Texas: A 7-footer who could probably touch opposite walls in your living room, but his skill level needs a lot of development.

Michael Porter Jr., PF, Missouri: He was projected to be the best player in his class, but a back injury limited him to three games. Health is the key.

Miles Bridges, SF, Michigan State: He has some offensive skills, but at his height, 6-7, he’ll need to develop a more consistent outside game.

Trae Young, PG, Oklahoma: He’s small at 6-2, 178, but has a high basketball IQ. A tremendous passer and good shooter; fearless. He might be a liability on defense.

Mikal Bridges, SG, Villanova: He played within the winning team concept at Villanova, so he could fit in pretty quickly as a bench player. A willing defender.

Lonnie Walker IV, SG, Miami: He’s widely talented but also wildly unpredictable. If a team can harness his talent, he has great potential.

Collin Sexton, PG, Alabama: A steady point guard who made his teammates better and can also get open for his own shot. 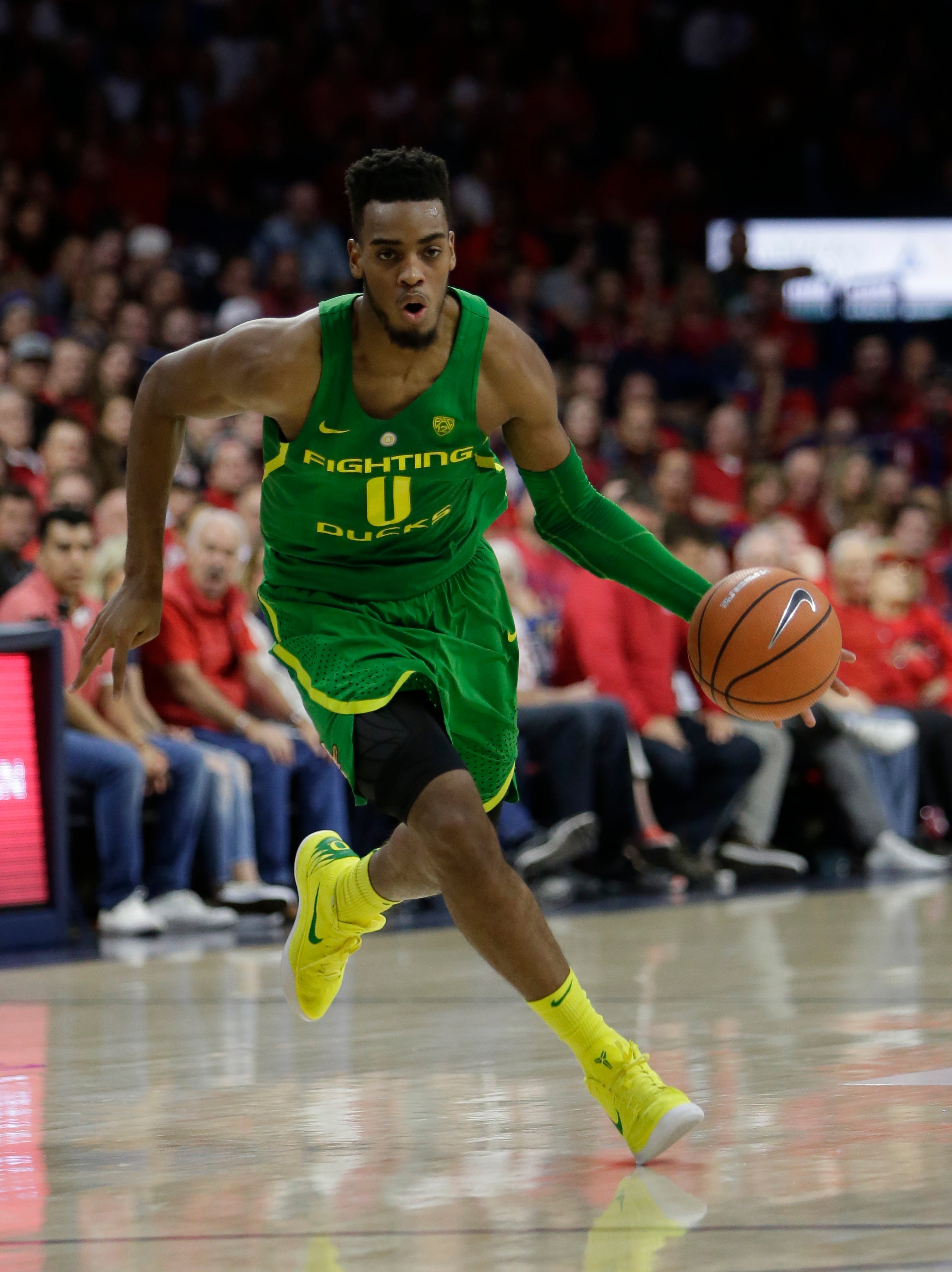 Troy Brown Jr., SF, Oregon: He wasn’t even the best player on his own college team, but he’s made an impression on someone.

Kevin Knox, SF, Kentucky: An outstanding shooter who can get his shot off over smaller defenders because he’s 6-9. In today’s NBA, he’ll be a valuable player.

Robert Williams, PF, Texas A&M: A great body at 6-9, 237, jumps out of the building, rugged defender, but he lacks some fundamental skills.

Shai Gilgeous-Alexander, PG, Kentucky: He had a great season as Kentucky’s point guard; his quickness led to easy drives to the basket, plus he’s a good passer.

Melvin Frazier, SF, Tulane: He was the leading scorer on a 14-17 Tulane team; another player who has impressed the scouts since the college season ended.

Zhaire Smith, SG, Texas Tech: We saw him in Boston in the NCAA Tournament; he plays hard and a lot taller than his 6-4 height. He has the makings of a great defensive player.

Elie Okobo, PG, Pau-Lacq-Orthez (France): A 6-3 guard from France is a mystery to me. Is he better than Frank Ntilikina? Would that matter?

Jacob Evans, SG, Cincinnati: He was part of one of the best defensive teams in college. He’s not particularly skilled on the offensive end.

Kevin Huerter, SF, Maryland: He fits the modern NBA, a player with good size (6-7) who’s a dangerous outside shooter.

Chandler Hutchison, SG, Boise State: A high-IQ player who led his team in scoring, rebounding, and assists. He’ll find a way to help.

Keita Bates-Diop, SF, Ohio State: He was able to play inside and out for the Buckeyes and was part of an unselfish, smart team. 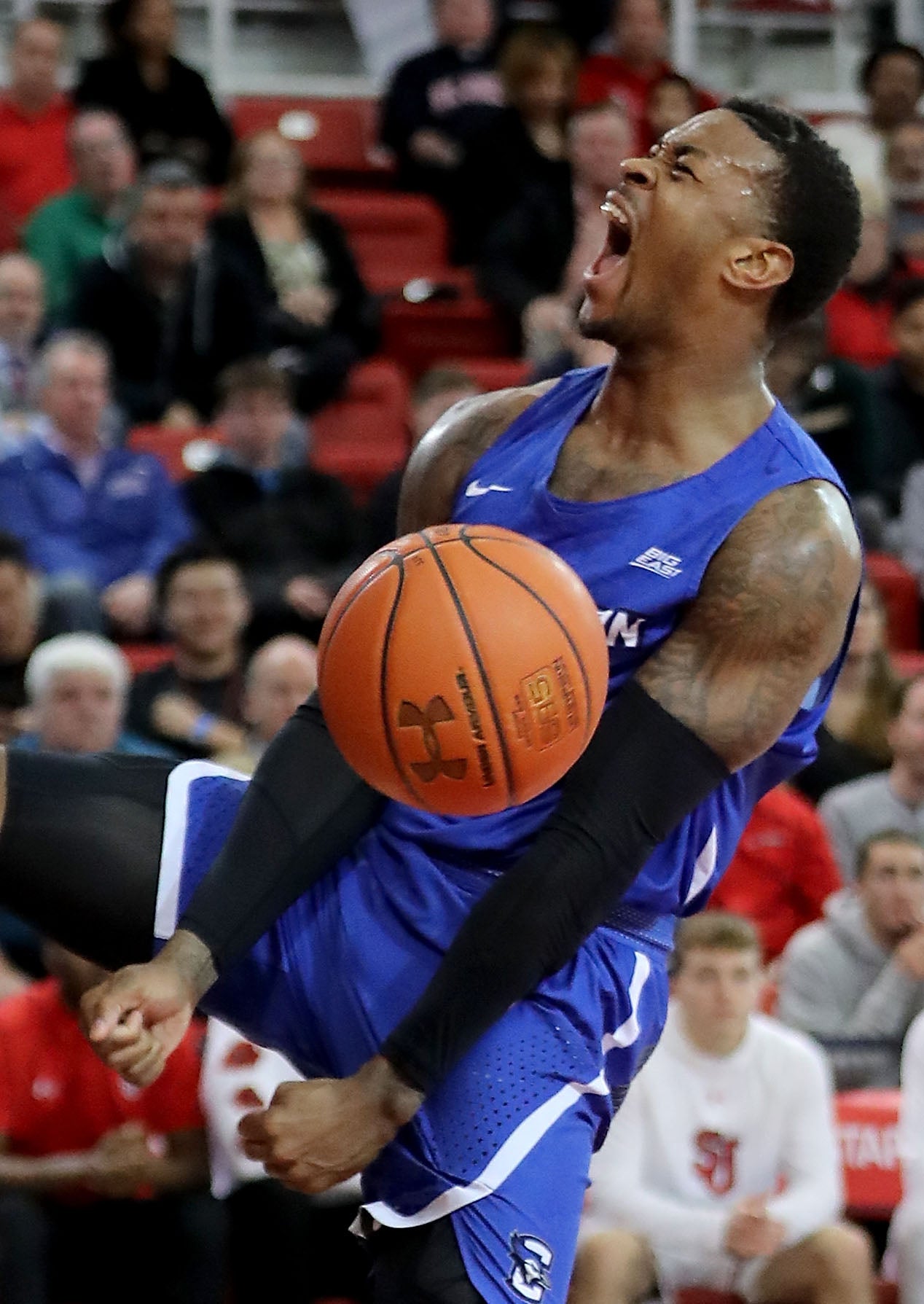 Khyri Thomas, SG, Creighton: An excellent shooter who plays hard, but his college accomplishments do not measure up to a first-round selection.

Mitchell Robinson, C, Western Kentucky: He didn’t play in college last season after leaving Western Kentucky just a few days after classes started. No other college would take him. I guess there’s a dependability question.

Dzanan Musa, SG, Cedevita Zagreb (Croatia): He’s billed as a scorer, so we have to assume he’d be a reliable 3-point shooter.

Josh Okogie, SG, Georgia Tech: Another player who impressed NBA evaluators after his college season ended. My thought: He was the leading scorer on a team that lost to Boston College twice.

De’Anthony Melton, SG, USC: He sat out last season after an FBI investigation implicated an assistant coach at USC. He averaged 8.3 ppg as a freshman.

Donte DiVincenzo, SG, Villanova: He exploded in the Final Four as was named most outstanding player of the NCAA Tournament. An outstanding shooter, he’s also an excellent athlete who can run the floor.

Aaron Holiday, PG, UCLA: An ultra-quick point guard who has excellent vision and finds open teammates. A team player who came off the bench for one season so Lonzo Ball could start and didn’t publicly complain.

Rawle Alkins, SG, Arizona: He was hindered by a foot injury last season at Arizona but has the look of a rugged NBA defender.

Jalen Brunson, PG, Villanova: Arguably the best player in college basketball last season. Not the greatest athlete, he succeeds with a Phi Beta Kappa approach to the game.

Moritz Wagner, PF, Michigan: Another big guy who fits in today’s NBA; he’s a solid outside shooter with size (6-11). Foot speed could be an issue. 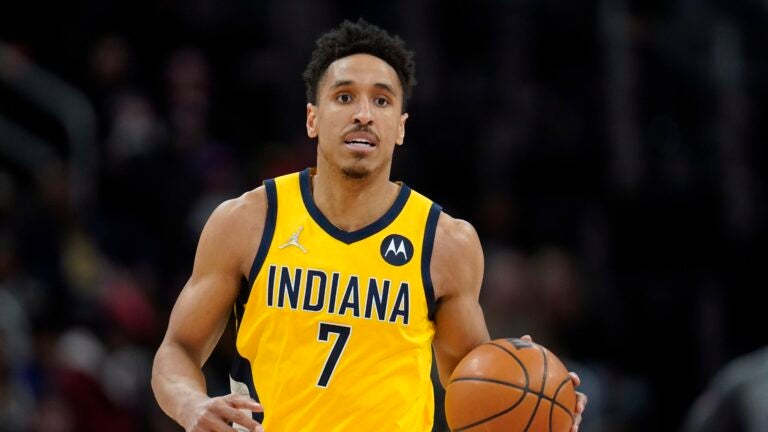