Red Sox utility man Brock Holt’s cycle in Game 3 of the ALDS didn’t just propel the Red Sox to a 16-1 win over the New York Yankees.

Celtics coach Brad Stevens is using Holt’s contributions — and subsequent non-disciplinary benching — as a model for his team ahead of their upcoming season, too. Stevens, who was at Fenway Park for Game 1 of the ALCS against the Houston Astros, said he highlighted Holt’s role during a recent film session.

“I mean, the Brock Holt example last week — going for the cycle and getting a DNP the next day — is how you win, right?” Stevens said at the Auerbach Center Sunday afternoon. “Being willing to take on those roles — both as the guy that did it and the guy that replaced him the next night [Ian Kinsler], those things matter. They’ve set a great example for us, as we move into a new year.”

During Boston’s injury-ridden playoff run last season, Stevens preached the importance of making the most of one’s opportunity — a notion that will undoubtedly come into play this year as well. The returns of All-Stars Gordon Hayward and Kyrie Irving will likely limit the playing time of reserves who experienced starting minutes a year ago, but Stevens has stressed it’s more important how they play versus who they play.

“Your rotation can change in a heartbeat,” he said in early September. “You can work all summer on it and then you’ve got to adjust in one day. The bottom line is we have an idea of who we’ll play together and who best fits together and what lineups we think we’ll try to use, but we’ll see how it shakes itself out.”

Given their talent and depth, the Celtics are expected to be a championship contender this season — as are the Red Sox, Patriots, and Bruins.

Though the Red Sox didn’t get the win against the Astros in Game 1, Stevens is pulling for them to turn things around in Game 2. He said he remembers when the team won the World Series in 2013 — his first year in Boston — and his family has been “hooked” ever since. During spring training earlier this year, he spent some time with manager Alex Cora in Fort Myers and has “watched, admiringly, from afar” throughout their 108-win season.

“All of us, whether we’re transplanted or not, become fans of the teams here,” he said. “It’s a blast to go over there and watch them work. Coach Cora and the whole organization has had a heck of a year. We hope it lasts a few more weeks.” 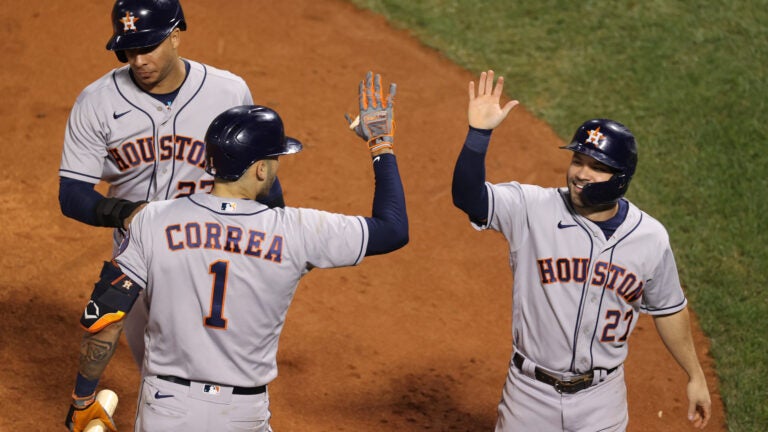