With Al Horford out injured, Celtics rookie Robert Williams has played more minutes in the last two games than he had previously seen the whole season. And with the increased playing time, Williams has put up some respectable statistics, averaging 6.5 points, 8.5 rebounds, and 60 percent shooting in just under 20 minutes. The 21-year-old even stifled the Pelicans’ All-NBA center Anthony Davis on the defensive end Monday.

But Danny Ainge, the Celtics’ president of basketball operations, still sees one area in need of major improvement: His nickname.

“I think we can do better,” he added, later tweeting his own personal suggestion.

Unfortunately for Ainge, it may be too late.

The newfound nickname has taken root among Celtics fans, especially the hyper-engaged diehards on Twitter, as well as local and national media. The Celtics Twitter account recently began referencing it. The watchmaking company Timex has even taken an interest.

Williams himself has embraced the “Time Lord” moniker, even if he doesn’t exactly understand it.

“I don’t know where that [expletive] came from,” he told MassLive’s Tom Westerholm in October.

The short answer is that Time Lord is an ironic reference to a few slip-ups Williams made shortly after getting drafted by the Celtics, oversleeping a introductory conference call with reporters and subsequently missing a flight to Boston, as well as the team’s first practice.

The long answer is a bit more nuanced.

Ryan Hebert, who goes by @HebertofRiffs on the platform and is one the more prolific Weird Celtics Twitter personalities, takes credit for helping spur the nickname. Hebert told Westerholm that he had been a fan of Williams during the center’s college days at Texas A&M University. And, of course, as a Celtics fan, he thought the under-hyped defensive star could be a perfect fit in Boston.

Hebert tweeted about the possibility as far back as November 2017.

Ayton and Robert Williams are great prospects for what we need

However, in the days leading up to — and even after — the 2018 NBA Draft, some experts raised questions about the undoubtedly talented Williams’s work ethic and “motor.” When he fell to the Celtics in the late first round, Hebert and his Weird Celtics Twitter peers were ecstatic. However, when Williams missed that first conference call and flight, it seemed to confirm the doubts in the minds of skeptics.

“Robert Williams’ Celtics career off to worst start imaginable,” read a WEEI.com headline in July, before the rookie had even suited up for a game for the Celtics.

Hebert felt the general reaction in the media to those few initial mistakes was a bit dramatic.

“Local writers and talk-radio people overreacted, and the whole point of Weird Celtics Twitter is to make fun of them and media in general being too uptight,” he told Westerholm.

In an attempt to support Williams and get under the skin of those “uptight” media figures, Hebert and friends began joking that the rookie hadn’t actually been late, per se, but was simply “operating on a different timeline concurrent to the one we are in,” like some sort of basketball-playing “Doctor Who” character.

And thus, Time Lord was born.

“Basically, Timelord boiled down to the prediction of drafting him in 2017 and also defending him against uptight people who were earnestly acting like they’ve never been late to work in their lives,” Hebert told Westerholm. “Weird Celtics Twitter is a bizarre place, but we genuinely love the characters and personalities and people on the team, and we are online so much that we have to do absurd things to show people how stupid it is to say a mega-athlete with a savant-like feel for timing, blocks and passing is a bust because they missed a flight.”

“They going crazy with it,” he said during a recent NBC Sports podcast. “I don’t see a problem with it. … You gotta be able to joke about your mistakes.”

Ainge may not be satisfied with the nickname. But if one thing is for certain, it’s that Time Lord is at least better than the alternative: Boo Butt.

We don’t have much of an explanation for that one, other than that it’s the nickname Williams’s mother reportedly gave him at a young age. According to his older sister, Boo Butt is the only one she’ll call him. 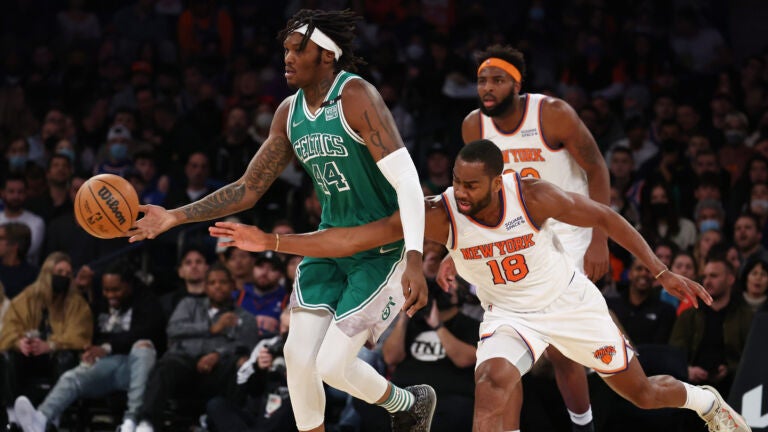 The Celtics seem to be teetering: 7 takeaways from C's vs. Knicks