Wednesday was another night worthy of a Gatorade bath for Celtics forward Gordon Hayward, who — courtesy of teammates Al Horford and Guerschon Yabusele — was doused with cups of water after tallying a season-high 35 points on 14-for-18 shooting in Boston’s 115-102 win over the Minnesota Timberwolves.

“Whether it’s for my shot or for others, I think the team needs me to be aggressive,” Hayward told reporters after the game.

Without Kyrie Irving, the Celtics converted on a season-high 59.2 percent of field goals — their third-best shooting percentage in 447 games during coach Brad Stevens’s six-year tenure — and on 40 percent of three-pointers. They also matched their season-high assist total with 34.

“The ball was really moving,” Stevens said. “We were looking for each other.”

The 13-point victory was the first of 11 home games scheduled during the month of January, as the 22-15 team will look to build momentum against the Dallas Mavericks Friday.

Here’s what we learned from Boston’s first win of 2019:

Replacing Irving, Rozier couldn’t have asked for a better start. In 10 and a half minutes in the first quarter, the 24-year-old scored 11 of Boston’s 21 points on 5-for-5 shooting and added two rebounds, two steals, and an assist. For his fifth basket, he flaunted a nifty fake à la former Celtics point guard Rajon Rondo’s signature move.

Rozier is having himself a quarter! pic.twitter.com/6kbBYvF8ME

In his three games as a starter this season, Rozier’s numbers are noticeably higher compared to those in his 34 games as a reserve. Increased points, rebounds, and assists per game could merely be a function of increased playing time, but his shooting percentages from the floor, behind the arc, and the line also experience significant jumps. The team also scores 10.6 more points per 100 possessions when Rozier starts as opposed to when he comes off the bench. 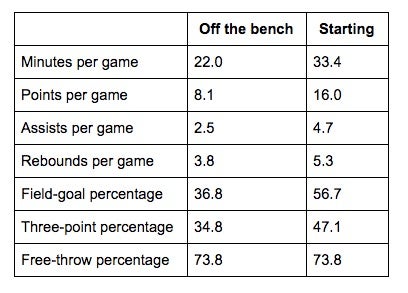 The contrast in performances is certainly not enough to vouch for Rozier to start over Irving, but it does beg the question why such a difference exists. Perhaps the opportunity to start helps slow the game down, discouraging him from pressing or forcing shots early in the shot clock. Or perhaps it offers a sense of swagger that manifests via greater confidence and impact; after all, Rozier did say his mentality headed into Wednesday’s game was to “go out there and kill.”

The Celtics can’t let the third quarter become an issue.

Opponents of late are feasting against the Celtics in the third quarter.

In their loss to the San Antonio Spurs Monday, Boston surrendered 46 points in the third — the most it has allowed in any quarter since 2000 — relinquishing its six-point lead at the half. The problem resurfaced Wednesday, when the Timberwolves totaled 39 points in the third to cut an 18-point halftime deficit to six. Center Karl-Anthony Towns, who was limited to just four points on 2-for-9 shooting in the first half, scored 20 points on 8-for-9 shooting in the third alone.

“We’ve been giving up really big margins, point-differential wise, and that’s something that’s going to hurt us down the road,” shooting guard Marcus Smart said. “We’ve just got to figure it out. We’ve just got to bring the energy from the start, earlier, as soon as we come out at halftime.”

Over the team’s last two games, opponents are shooting 72.9 percent (35-for-48) from the floor and 77.8 percent (7-for-9) from three-point range in the third. Smart said he has “no clue” why the team’s defense is struggling, but he and Hayward both acknowledged something needs to change.

Minnesota is no match for Gordon Hayward.

So, what is it about Hayward and the T-Wolves?

“I don’t know,” he said, with a smile. “Shots seem to go in against those guys.”

Hayward’s 35-point night was particularly impressive because he went scoreless (0-for-2) in the six and a half minutes he posted in the first — a drought that extended back to the Spurs game when he finished with 0 points in 22 minutes. All 14 of Hayward’s buckets Wednesday came in the 25 minutes he logged over the final three quarters. That’s incredibly efficient.

“14-for-18’s an unbelievable night,” Stevens said. “You’re not always going to shoot it like that, but you could tell he was pretty locked in and was going to play well.”

After the game, Hayward said he’s still striving for consistency and does not want to get “too high on the highs or too low on the lows.” He wasn’t shy in identifying areas of improvement, with aims to attack the basket and get to the free-throw line more. He also hopes to boost his explosiveness and vertical. Even so, a performance like Wednesday’s is certainly encouraging. Entering the game with seven dunks this season, Hayward tacked on three to that total.

The team is little banged up, though things could be worse.

With Irving out with eye irritation, rookie center Robert Williams out with a left groin strain, and center Aron Baynes out with a broken hand, Celtics fans were probably less than thrilled to see Smart and Marcus Morris leave the floor for visits to the locker room.

Smart struck his shoulder on a screen from Towns in the third quarter, but he managed to avoid dislocation or subluxation and returned to the floor after missing fewer than 10 minutes of game time. Smart said he plans on icing the injury, which was officially diagnosed as a strain, taking Advil, and checking in on Thursday.

“I just got hit in the right spot,” he said. “Nothing is out of the ordinary, so that’s a good sign.”

There’s a bit more concern surrounding Morris, who landed awkwardly on his upper body after a tumble in the fourth quarter. Stevens said the 29-year-old has a “really stiff neck” and “looks like he’s hurting.” Morris was ruled out of Wednesday’s game with just under four minutes remaining and will be re-evaluated Thursday. There are no plans for imaging or an MRI as of now.

With just over 10 minutes remaining, Marcus Morris left the floor.