“Tonight, we celebrate, we honor the life and legacy of Dr. Martin Luther King,” Irving said at center court in front of 18,000-plus fans. “A man who truly embodied what it means to be a leader, a visionary, and a dreamer. But I think what we most remember him for is his stance and his action. He fought for justice, equality, and, most importantly, peace for all. So, on behalf of the Celtics organization and everybody here, we honor Dr. Martin Luther King today.”

Irving, who finished with 26 points, 10 assists, and a career-high eight steals in Boston’s win over the Heat, told reporters after the game he was “kind of nervous” when preparing his remarks Sunday evening. He said he wanted to capture “how great of a man [King] was and what he meant to society.”

“For me to be standing here today and know that the sacrifices of him and countless others have enabled me to be here today and play the game that I love,” Irving said. “Just spread a message to other young people that have a lot of history to learn about what this world looked like in the past and what it looks like going forward. Next generation is next up. It’s my job to continue to be a pioneer and speak up on social injustices and equality and ultimately peace.”

The Celtics and the Heat were two of 22 NBA teams to play on the federal holiday, which is observed on the third Monday of January each year. Players wore special warmup shirts with the title of King’s most famous speech, “I Have a Dream,” printed on the front and a line from the speech on the back.

“I have a dream that one day this nation will rise up and live out the true meaning of its creed: ‘We hold these truths to be self-evident, that all men are created equal,'” the shirt read.

“It’s kind of one of those things where he’s been gone for what — 50-plus years now — and some of his messages still remain intact,” Brown said. 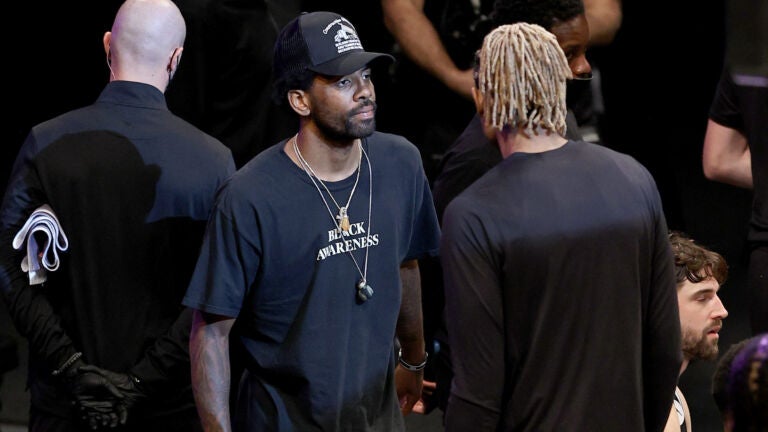